William D. Adams, the tenth chairman of the National Endowment for the Humanities, announced today his resignation from the agency, effective Tuesday, May 23, 2017.

Adams was nominated by President Barack Obama in April 2014 and was confirmed by the United States Senate three months later. His service to NEH followed 14 years as president of Colby College in Waterville, Maine.

In a brief statement to staff, Adams expressed his gratitude for the opportunity to serve as the chairman of NEH and his admiration for the work of the agency. “Leading this important organization has been one of the most exciting and gratifying experiences of my life,” he said. “I’m especially appreciative of the excellent and dedicated staff of the agency, who taught me so much about the importance of the humanities and the innovative and meaningful work that is going on at NEH and across the country.”

Shortly after arriving at the agency, Adams launched a special initiative called “Common Good: The Humanities in the Public Square,” which seeks to demonstrate the relevance of the humanities to the challenges of contemporary life. “We wanted to show how important the humanities are to the really big questions that we’re grappling with as a country and indeed as a global community,” Adams said. “In these divided political times, we also wanted to remind people of the idea of the common good and to make clear how the humanities might serve to bring citizens together in advancing the general welfare of the country.”

Under the banner of Common Good, the agency launched a number of new grant lines, including the Public Scholar program, the NEH-Mellon Fellowships for Digital Publication, Common Heritage, Humanities in the Public Square, Next Generation Humanities PhD Grants, the Humanities Open Book Program, Creating Humanities Communities, Humanities Access Grants, and Community Conversations. Common Good also serves as the umbrella for Standing Together, NEH’s program supporting veterans and public understanding of military service and the legacies of war and conflict. Adams also led the preparations for the celebration of the 50th anniversary of NEH and spoke at numerous anniversary events around the country, including the multiday Human/Ties conference at the University of Virginia and Thomas Jefferson’s Monticello in September 2016.

In explaining his decision, Adams noted the positive resolution of the agency’s funding for the remainder of FY 2017 and the beginning of the administrative transition at NEH. “We’re encouraged that Congress and the President increased our funding for the current year and that the White House has initiated the process of bringing new political appointees to the agency,” Adams said. He also noted his desire to pursue his scholarship and to spend more time with his family. Adams will return to Falmouth, Maine, where he lives with his wife, Lauren Sterling.

Deputy Chair Margaret Plympton will serve as acting chair. NEH will announce its next round of grants following the meeting of the National Council on the Humanities in July. 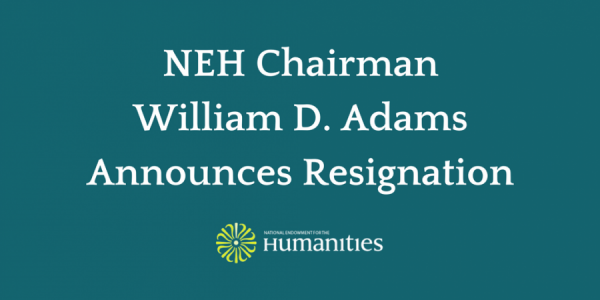