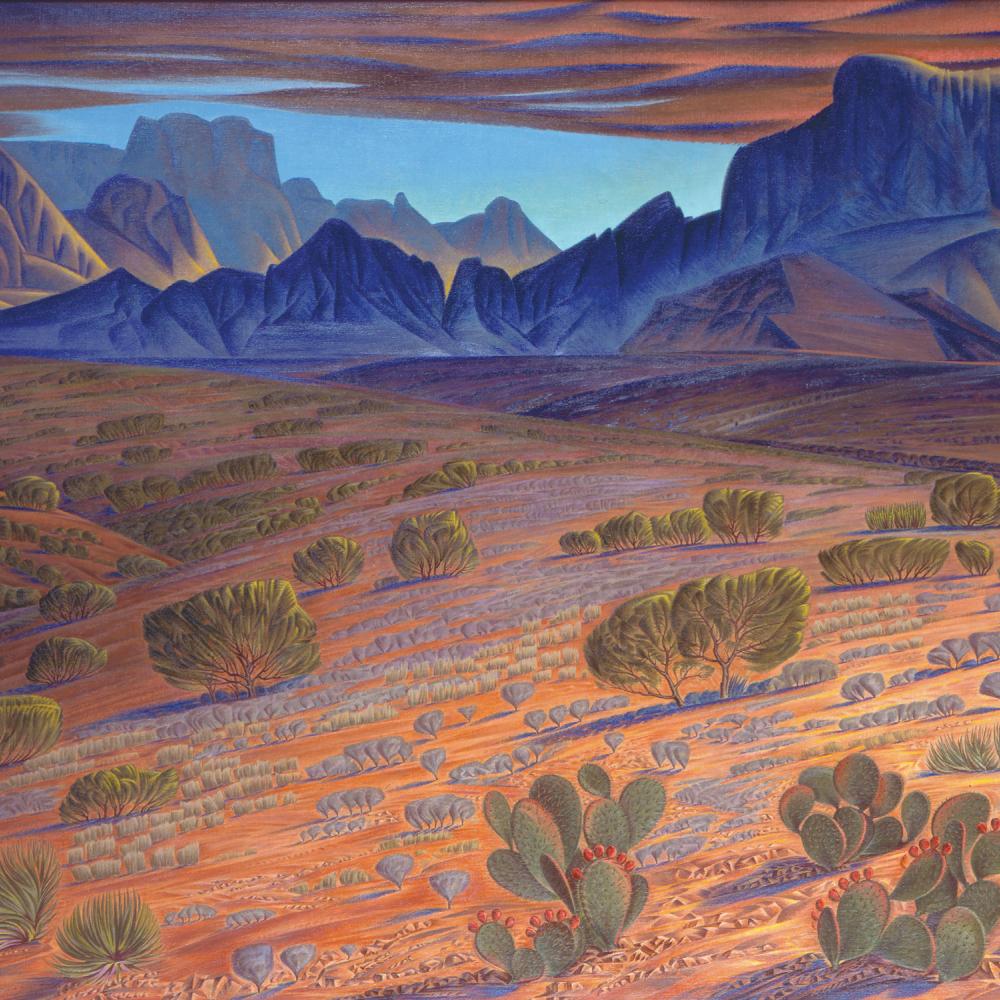 That which is truly new sometimes comes in the guise of the usual. If one doubts this premise, all that’s needed is a look at Alexandre Hogue’s landscapes, on view through August 20 at the Grace Museum in Abilene with support of Humanities Texas. Hogue’s works aren’t mere replicas of terrain. Rather, they reveal the mysterious delight that limns the interstices of hills, canyons, and rural structures. Like Ralph Waldo Emerson, whose first and primary church pew was Nature, Hogue didn’t seek to cut the transcendent from its literal “ground.”

Hogue is typically thought to be a “Dust Bowl painter” or part of a movement called “The Dallas Nine,” a loosely knit group of painters, printmakers, and sculptors active in the thirties and forties. Yet he ardently rejected both labels. He refused affiliations with any group and defiantly fought against nomenclature. While some historians continue to group him with artists with whom he felt no kinship, his biographers are beginning to demand that Hogue’s legacy be recognized in a more accurate light. He adamantly stated that he was not an artist of a particular region or era. He was furious when Life magazine referred to him in 1937 as a “painter of the Dust Bowl.” He took similar exception to comparisons to regionalist painters Grant Wood or Thomas Hart Benton as well as the frequently cited “Dallas Nine.”

Born near the close of the nineteenth century, Hogue enjoyed a long and prolific career that spanned seven decades. Astonishingly, Hogue was almost completely self-taught. He took a correspondence course in commercial design at age sixteen before graduating from high school in Dallas. He worked steadily from the 1920s until his death in 1994, and his body of work includes portraits, landscapes, and abstract pieces influenced by Persian calligraphy. But it is his landscapes that he is best known for, exploring areas such as Denton, Glen Rose, Big Bend, and, of course, his native Dallas as well as places in and around Taos, New Mexico.

The Crucified Land, painted in 1939, depicts the red soil south of Denton and indicates Hogue’s early impulse toward conservationism. He painted scenes illustrating the ravages of the Dust Bowl, but he also understood that water erosion posed an equally great threat. This work captures over-plowed furrows in fiery orange and vivid green. It’s moored by an image of a tilted scarecrow reminiscent of the Biblical Golgotha, the archetypal place of sacrifice and stony ground. A river bisects the terrain, and it seems more arterial thread than plain water. Just as bodies are the keepers of blood and bone inexorably transmuted into abject magic when they’re loved, Hogue’s soil, sand, and dust become incandescent when refashioned in his landscapes. Moreover, when the ground was violated, he sought to vividly expose the violation with his brush in colors that seem to spark and flame. It’s a case of lovely arson—of fire on the walls.

“The poetics of Hogue’s art,” writes curator Susie Kalil, “lie in how he fully communicates his experience of place and how those places may resonate in our imaginations.” During a period spent in New Mexico, circa 1928, Hogue painted Procession of the Saint—Santo Domingo, which he had witnessed. It shows the enactment of a Catholic religious ritual that precedes a traditional corn dance for rain and fertility. Linear furrows in tribal robes are duplicated in the surrounding terrain and clouds. Action and place merge and a luminous canopy suspended above the Native participants becomes a temple of sorts, a locus for a fusion of the sacred and profane. However, a Roman Catholic priest, featured in the foreground, is oblivious to the event behind him. Hogue commented on the figure: “I put dark glasses on him to symbolize his blindness to the beauty . . . (of) what he should be witnessing.”

In Pecos Escarpment, Hogue melds landscape and sky with a manmade environment—oil wells, pumps, and storage containers. It was painted as a commission for a Fortune magazine article about Gulf Oil. In his typical style, he immersed himself in the subject, living in the environment, taking photographs and making sketches. “I wanted to make sure it was right all the way through,” said Hogue. In the foreground are three large tanks and behind them lies an escarpment with dwellings and rigs. He told the Dallas Morning News, “Oil here complements nature. . . . The shiny tanks, often repeating cylindrical formations in the limestone cliffs, reflect the light very subtly, and the whole effect is one of extraordinary beauty.” He gives us no mere topography and oil machinery. Kalil describes Hogue’s paintings from this time as “the record of the vibrancy, the dynamism—the American pulse—that beat throughout those decades in the Far West Texas plains.”

Patricia Mora has commented on art in a variety of media, including magazines, The Dallas Morning News, and NPR.

Them Is Fightin’ Words