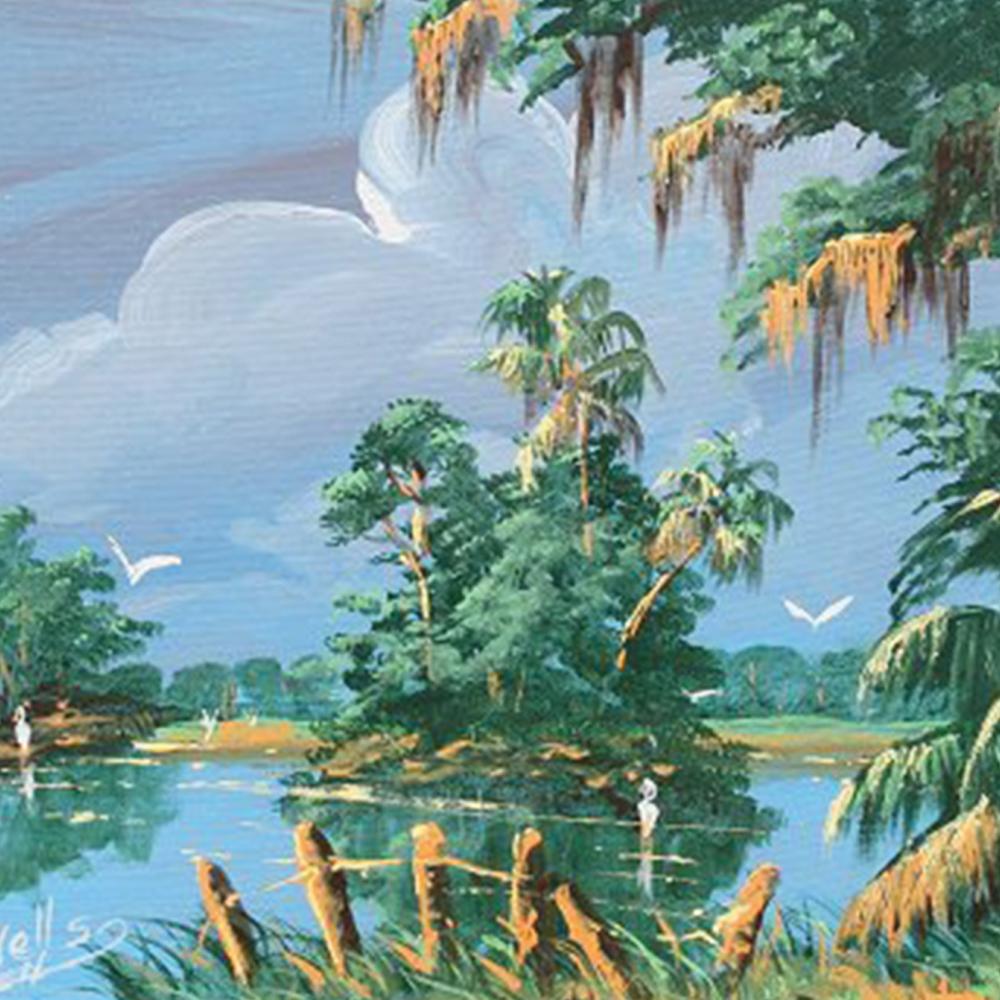 It was an era when most African Americans in Fort Pierce were relegated to working in kitchens or fields, when Jim Crow prevented them from using the same water fountains as whites, and few, if any, black artists could be found in history books. Despite the obstacles, a loose group of creative and entrepreneurial African Americans dared to break the bounds of poverty and segregation by capturing the rugged natural beauty that they saw around them. With quick strokes of their brushes and swift sweeps of bold colors with palette knives, they captured vibrant coastal sunsets framed by palms, royal Poinciana trees in flaming red bloom, and interior wetlands touched by egrets, ibis, and roseate spoonbills. 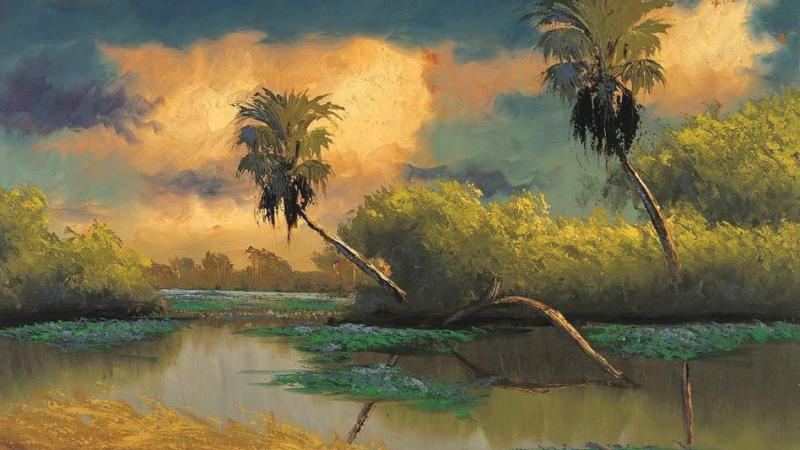 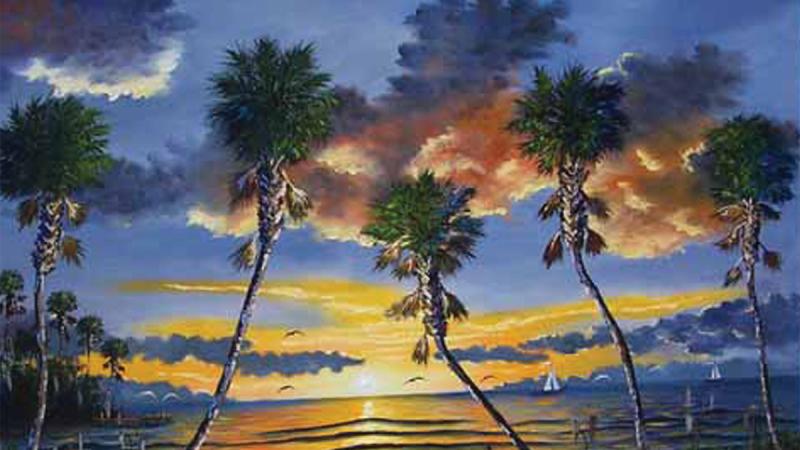 Since most galleries in the 1950s and 1960s refused to sell African-American art, these artists sold their creations for about twenty-five dollars apiece out of the trunks of their cars along Florida’s Atlantic coast. They went door to door at white-owned businesses and residences; they set up along U.S. 1 and peddled to passing tourists.

Decades later, after many had stopped painting, a prominent art collector declared their style distinctly Floridian and coined them the “Florida Highwaymen” because of where they commonly sold their art. The New York Times wrote about them. Prices soared. People started discovering old Florida landscape paintings in attics, yard sales, and thrift stores. Fakes appeared on eBay.

Today paintings by noted Florida Highwaymen sell for anywhere from $500 to $45,000 in galleries, antique stores, and art shows.

To University of Central Florida humanities scholar Kristin Congdon, they are significant because of their determination and success in using art to escape poverty and combat racial boundaries. “The times were changing with civil rights. They had an inkling that freedom was in the air,” she said. “They didn’t sit at the counters in protest, but they were doing the same kind of thing while saying I can bring you a gift.”

In 2004, a core of group of twenty-six Highwaymen were inducted into the Florida Artists Hall of Fame. The City of Fort Pierce, with the help of a Florida Humanities Council grant, is establishing a website and a Highwaymen Heritage Trail that traces significant sites of the artists’ development, lives, and, in a few cases, their deaths. Directed by Libby Woodruff, the trail officially opens in December with commemorative signs marking each site.

I find myself at the beginning of the trail, the Seven Gables House Visitor Center, which coincidentally is also part of a trail honoring African-American author Zora Neale Hurston, who once lived in Fort Pierce. The real launch of the Highwaymen’s history, however, is memorialized next door in the A. E. “Bean” Backus museum, which isn’t an official part of the trail.

Although the Highwaymen’s history is clouded with lore, one string of their story is clear: They were heavily influenced by Backus, a noted white Fort Pierce landscape artist. Gazing at Backus’s paintings of the pristine palm-lined coastline and blooming Poinciana trees, the similarities of subject and style are obvious. But Backus’s influence on the Highwaymen was also personal.

Backus’s two-story home and studio, the second stop on the Highwaymen Trail, was the unofficial cultural center of Fort Pierce for all races. Backus hosted jazz parties and his front door was open most days to anyone who wanted to watch him paint. Several young African-American onlookers practiced Backus’s techniques at home and went on to become Highwaymen.

Their stories continue across the railroad tracks in Fort Pierce’s African-American community. Along Avenue D in the heart of the neighborhood, you get a sense of the poverty that the artists attempted to escape. Even today, small tattered houses have rusty, window-unit air conditioners; many storefronts are boarded; chickens and colorful peacocks roam freely through weedy vacant lots. Despite the poverty, there is a palpable sense of community as neighbors gather in dirt backyards, sharing meals, beer, and sweet tea. It was the same communal sense that also defined the culture of the Highwaymen artists: They taught one another how to paint, construct white frames from crown molding, and, just as importantly, how to make money doing it.

Mary Ann Carroll, the only recognized female Highwayman, recalls how Harold Newton, often referred to as the original Highwayman, helped launch her career when she was struggling to support seven children. She spotted his car with flames painted on the side and watched Newton sell his work. She approached him and asked if he was making any money. “He said, ‘Yes, and I’ll show you how,’” she says. “I didn’t think I could do it. I knew I could do it.”

Carroll and the other hall-of-fame Highwaymen are commemorated on a large glass mosaic of a Poinciana tree on the side of the city’s Intermodal Transit Station. Farther along Avenue D, the artists are celebrated on a towering obelisk tiled with mosaics depicting their work.

Other stops along the self-guided trail are a nod to the most colorful and one of the most influential members of the Highwaymen—Alfred Hair. Hair was the only Highwayman to officially study under Backus. He was a star high school football player, but his art teacher recognized that Hair had another gift. At the teacher’s request, Backus mentored Hair, whose love of art led him to turn down a football scholarship.

Hair created a painting technique called “fast grass” using his palette knife. It enabled him to work quickly and be extremely prolific. He sometimes created thirty paintings a day and rushed them to market while the paint was still wet. His home, also on the trail, was practically an art factory when other artists hung out there, painting and building frames. Hair had a fleet of cars that he lent his salesman. And, ever the marketer, he drove a pink Cadillac.

Hair was shot and killed in 1970 following an argument at a juke joint where he and other Highwaymen artists often lingered. The bar has long since changed names and appearance, but the site is part of the Highwaymen Trail, as is Hair’s grave, which is covered by a mosaic in the nearby Pine Grove Cemetery.

Hair was such a powerful driver of the movement that several of the Highwaymen stopped painting after his death. Carroll was an exception. She continued painting furiously because she needed the money to support her family. She often painted four pieces in a day and estimates she has created “more than one million” paintings.

I catch up with Carroll at the Vienna Trading Antique Mall & Highwaymen Gallery in Fort Pierce, which displays about two hundred Highwaymen pieces. Co-owner Omar Castillo, with more than seven hundred paintings, is one of the largest collectors of Highwaymen art.

Despite her seventy-four years, Carroll continues to paint and is a shrewd businesswoman. When I lament that I cannot afford one of her pieces, she replies without hesitation, “Shssh. That’s no excuse. I do payment plans.”

Lynn Waddell is a freelance journalist, author, and a journalism professor at the University of Tampa. Her book Fringe Florida: Travels among Mud Boggers, Ufologists, Nudists, and Other Lovers of Unconventional Lifestyles was published by the University Press of Florida.

A postwar boom transforms Florida from backwater to dream state.