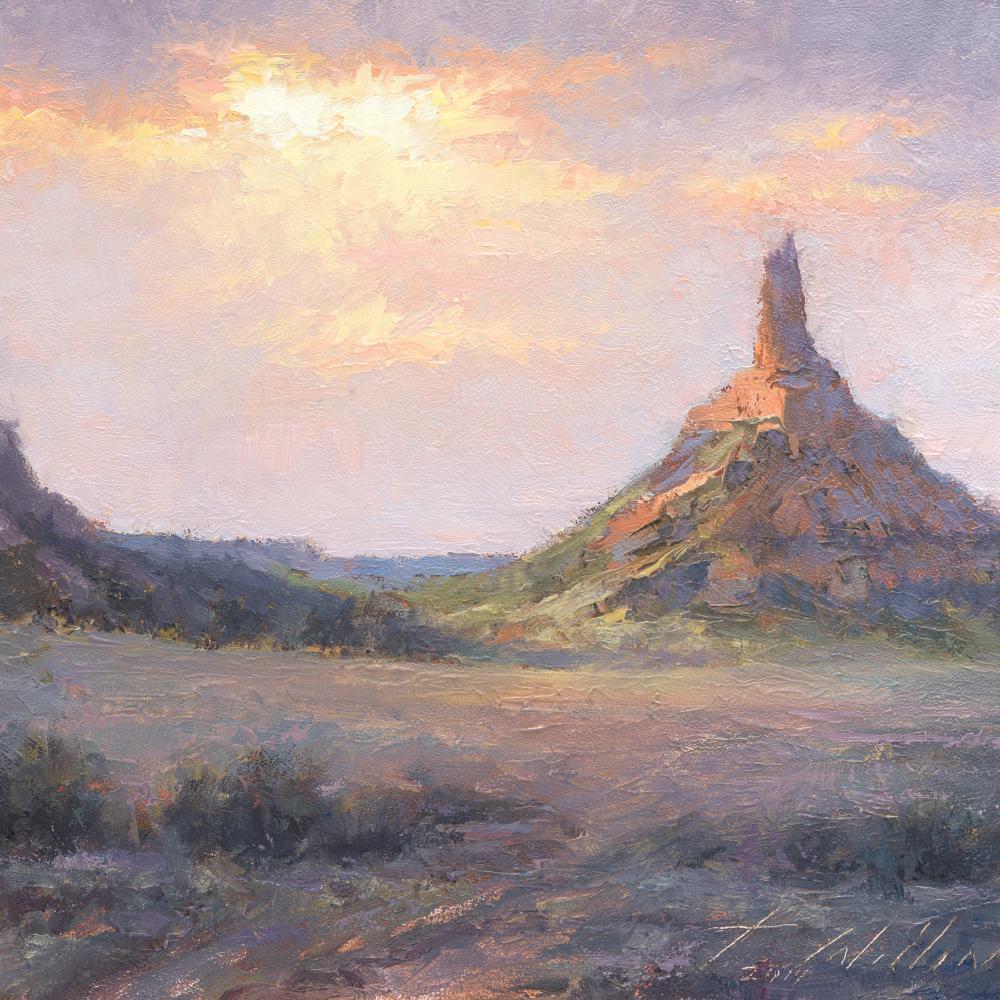 —Image courtesy of Todd A. Williams

For many artists, there are few scenes more inspiring than the Italian countryside. But as Todd Williams trekked across Europe, painting landscapes, he was dreaming of American cornfields. Williams was working on several series of paintings in Prague, Vienna, and Italy for his gallery back in the U.S., and he conceived of a project on a larger scale: Painting the geography and history of his home state, Nebraska.

Five years, 93 counties, and more than 100 paintings later, Williams is touring the state with an exhibit that views Nebraska’s landscape in a new light. As part of the state’s sesquicentennial, his “Legacy of Nebraska” exhibit and workshops give lessons in history, geography, and viewing landscape through art.

“One of my goals for this project was to help inspire people to want to travel more throughout the state,” Williams said. “I wanted to be able to show the diversity of how beautiful other parts of Nebraska are, because some people never had the chance to get off the beaten path, get off I-80, and explore some of the historical figures.”

The “Legacy of Nebraska” exhibit, which will travel to eight museums throughout the state, is a geographical tour in itself. Arranged by county, Williams brushes over the past and present in ways viewers may not expect—but that they will likely recognize in one of the exhibit’s 123 pieces.

The scope of such a project may seem staggering, but Williams had help.

“What’s kind of neat about the state of Nebraska—and not all states are like this—but each county has its own historical society,” Williams said. “As I traveled around all 93 counties, I made sure that in most cases I visited with the county historical society first, and would visit with the local historians and just learn about that county.”

The catalog includes historical descriptions alongside the artwork, which read like the greatest hits of Nebraska lore: Pioneer families travel west; some decide to stay. The Sioux and the Ponca fight for a land they have loved and treated well. An ill-fated citizen named Edward Anguish abandons his flour mill in Arapahoe County a few years after he built it. A young Johnny Carson smirks from a saloon in Norfolk.

Amanda Mobley Guenther, project director for “Legacy of Nebraska,” sponsored by the Nebraska 150 Foundation, compiled much of this history in the catalog and its accompanying exhibit, synthesizing a combination of Williams’s research, that of local historians, and her own.

“He really focused on what it was like in those initial years of statehood,” Guenther said. For example, “the trains and the railroad companies had such a huge impact on how the state was settled and where. If there was a small settlement but the railroad company wanted their rail line to be four miles north, then they would put the city four miles north of where they had already started to settle. I find that kind of influence in the state so fascinating.” And, sure enough, Familiar Scene, one of Williams’s first pieces for his native Merrick County, depicts a yellow Union Pacific engine steaming straight out of a fiery Central City sunset.

The force of the influences that shaped the state becomes obvious in the way Williams’s brush makes these scenes resonate in the present. With his “contemporary impressionist” style, Williams works to evoke an “energy” that engages his viewers emotionally. He paints with “alla prima” techniques, layering wet oil paint in a way that allows rough textures and vibrant color to appear to move beyond the canvas.

The project “wasn’t just the top five writers or the three most important historic sites or something like that. There was this local feel, this feel at the local level of individuals, the vocations, the business main streets or the rural farms or ranches,” Smith said. “I think that gives people a real feel for the history of the state.”

Williams’s visual tour begins with a sight that, ironically, bid pioneers goodbye from Nebraska as they traveled west: Sioux Encampment near Chimney Rock depicts “a historical landmark, very iconic,” Williams said. “As people were traveling west, the story goes that as they saw Chimney Rock, they’d never seen anything like that before, and they said, ‘Wow, we’ve finally made it to the West.’”

Williams considers the piece important as much for its subject as for its artistic value: “To have the Sioux, and Native Americans in general, to honor them, was a big part of the collection.”

Across the project, the number of stories his work tells is a source of pride: “I think what I’m most proud of is the diversity of the collection,” Williams said. For pieces like Chimney Rock, he worked en plein air, focusing on color and form. When he painted Chief Standing Bear, the Ponca leader’s black-and-white photograph sat patiently for his portrait in Williams’s studio.

But the piece that epitomizes Nebraska for Williams is the cover of the catalog: Reaping the Harvest, which depicts Keith County in the early twentieth century, when Nebraska was the fourth-leading state producer of wheat: “That painting tells the story of Nebraska’s people and their work ethic and their pride in the land,” Williams said. “The sun is setting, the day is ending, there’s a storm approaching, and still the workers continue in the field to get the job done.” The piece is among one of his most striking, displaying his penchant for burning golds beneath big skies.

As Guenther was preparing the historical texts for the exhibit, she noticed the double perspective of a living artist presenting a version of Nebraska that is, in some cases, long gone.

“When you’re looking at historical paintings, you might have some writings by the artist, but oftentimes you have to rely on the history of the time period or the history of the subject matter that was painted, and you don’t get the luxury of doing both: looking at the history and talking to the painter who made it,” Guenther said.

Williams’s project aims not only to give new color to his state, but to its artists as well. In addition to his museum tour, he travels throughout the state on speaking engagements to schools, with support from Humanities Nebraska.

“What I’ve been doing is hopefully bringing some recognition to the visual arts,” Williams said. “The ‘Legacy of Nebraska’ project will accomplish its highest goal if it can inspire the next great artist in Nebraska, whoever that may be.”

Through Williams’s art and workshops, artists, historians, and citizens have found lessons they were eager to learn. “It was a process, but a lot of people who come through the exhibition tell us that they love not just looking at the artwork, but taking the time to read about each county,” Williams said. The selection of images is certainly Williams’s, but the story is Nebraska’s.

Hannah Niemeier was an intern for HUMANITIES magazine. She is a student at Hillsdale College in Michigan.

This article is available for unedited republication, free of charge, using the following credit: “Originally published as 'Picturing the Land' in the Fall 2017 issue of Humanities magazine, a publication of the National Endowment for the Humanities.” Please email us if you are republishing it or have any questions. 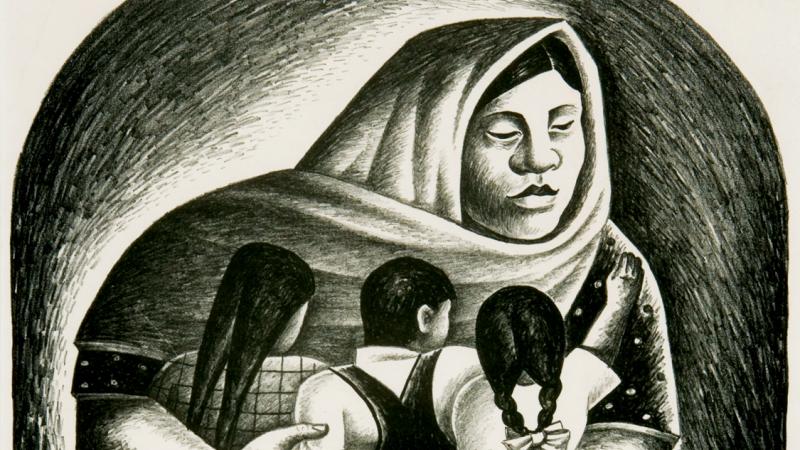 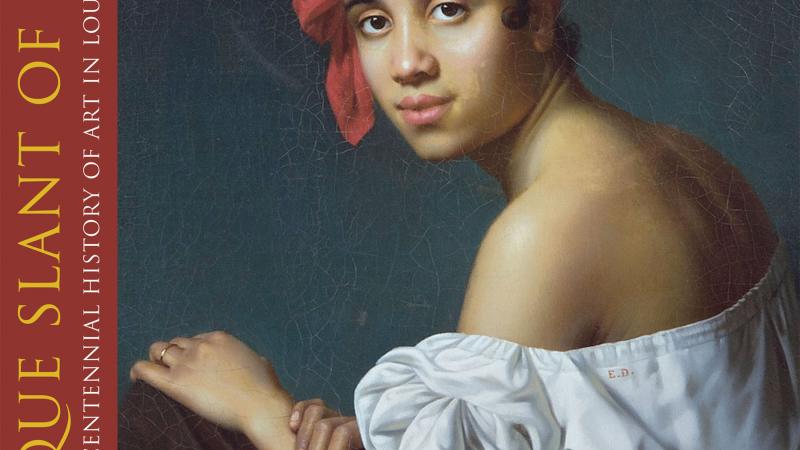