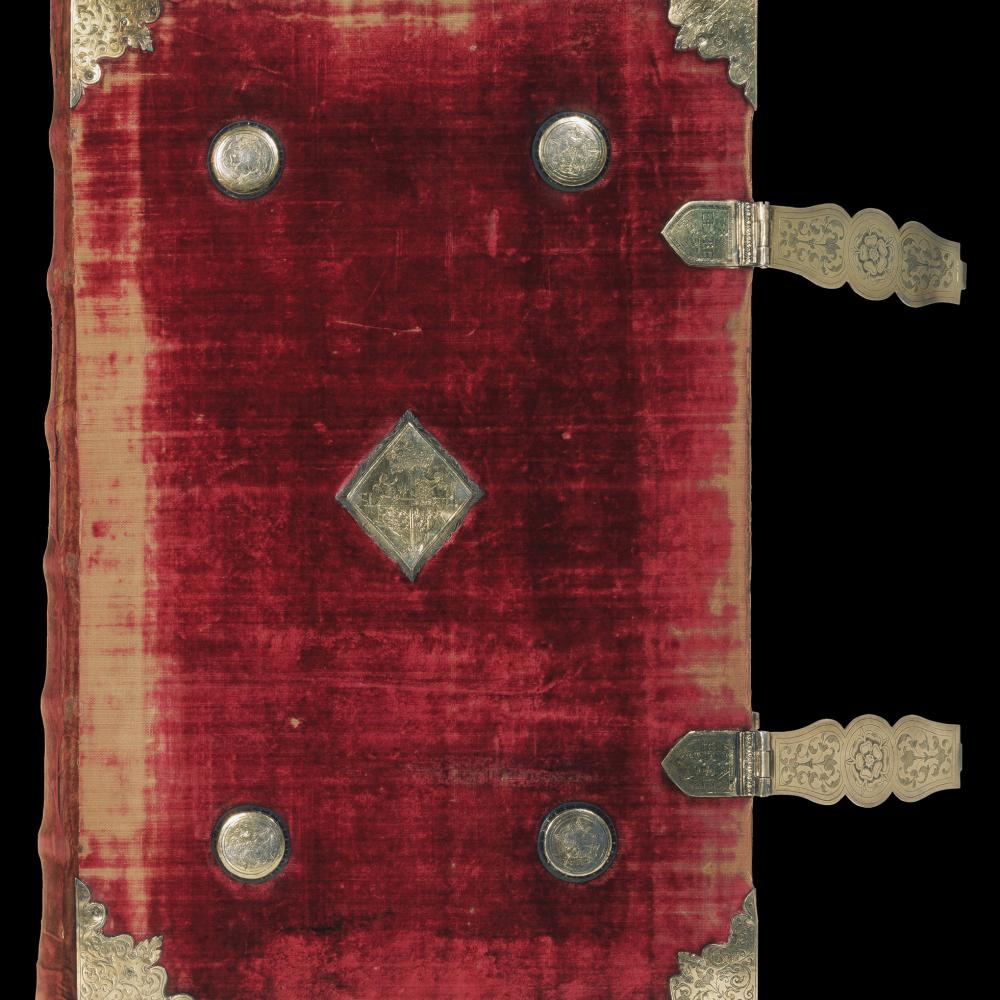 The velvet-and-silver cover for Elizabeth I’s Bishops’ Bible from the NEH-supported 2011 traveling exhibition “Manifold Greatness,” produced by the Folger Library in Washington, D.C.

In 2015, Jeffrey Alan Miller, an English professor at Montclair State University in New Jersey, stunned the academic world with his announcement, in the Times Literary Supplement, that he had discovered “the earliest known draft of any part of the King James Bible, unmistakably in the hand of one of the King James translators.” This year Miller was awarded an NEH research fellowship to bring out a critical edition of the draft, and, as we went to press, it was announced that he had won a MacArthur “genius” grant.

Who is Samuel Ward and what were you looking for in his papers in the summer of 2014?

Samuel Ward (1572–1643) was a moderate Puritan theologian who spent much of his career as the master of Sidney Sussex College at the University of Cambridge. Sometime in or around 1604, when Ward was still just a young man, he was tapped to be one of the translators of the King James Bible, published in 1611.

How did you figure out that this notebook contained a draft of part of the King James Bible?

The eminent historian Margo Todd had prepared a catalog of all of Ward’s extant papers now at Sidney Sussex. She described the notebook as containing a “verse-by-verse biblical commentary” of an unspecified biblical book, also featuring “Greek word studies, and some Hebrew notes.” On closer inspection, it didn’t seem that Ward was “commenting” on the unknown biblical book, so the first task was to figure out which book of the Bible the notes concerned.

Once I realized they pertained to the book known as 1 Esdras and that another set of notes in the notebook pertained to a book known as Wisdom, both included in the King James Bible as part of the Old Testament Apocrypha, which I knew Ward had been involved in translating, the penny started to drop. The notes, however, didn’t resemble what one might expect a draft of the King James Bible to look like. It was only when I realized that, rather than preparing an entirely fresh translation, the notes showed Ward, verse by verse, often phrase by phrase, proposing revisions to a prior English translation of the Bible known as the Bishops’ Bible—which is how the King James translators were, in fact, ordered to approach their new translation—that I finally realized what I had before me. At that moment, I sat back in my chair in a stunned silence. It’s the kind of thing one never expects to have the chance to lay eyes on.

What does this discovery mean for how the six committees convened in 1604 by James I created
a new English-language Bible?

Ward’s draft provides the first hard evidence that at least one of the six teams or “companies” of translators went about their work, initially, by delegating the translation of individual biblical books or parts of books to individual translators. The traditional assumption had long been that the companies of translators worked on the translation together as a group or committee through the entire process. This doesn’t mean that Ward’s draft shows the King James Bible to be any less a marvel of collaboration than it has always been regarded as being. It does, though, indicate that the King James translation may be far more a patchwork of “individual” translations—the product of individual translators and individual companies working in individual ways—than has ever before been fully considered.

Have you gleaned any new insights into the beauty of the King James Version?

That’s one of the key things I’m hoping to explore with the help of the NEH fellowship. It was once common to suggest that crafting a “beautiful” or “literary” translation of the Bible had been one of the principal goals of the King James translators. More recently, scholars have pushed back against that idea, revealing the translators to have been animated far more by scholarly and theological considerations. Ward’s draft, however, helps illustrate that it may be possible to correct too far in that direction. Various decisions Ward made as a translator seem to have been arrived at for what appear to be stylistic reasons, at least in part and in certain moments above all. Ward’s draft also indicates that stylistic and scholarly considerations should not be seen as mutually exclusive. One could even argue that the King James translation’s enduring power lies precisely in its unique union of those two vital aspects—scholarship and style—at the heart of any translation, biblical or otherwise.

In 2019, Jeffrey Alan Miller was awarded a $60,000 NEH research fellowship to complete a scholarly edition of Samuel Ward’s notebook.

The text of this article is available for unedited republication, free of charge, using the following credit: “Originally published as “First Draft of the King James Bible” in the fall 2019 issue of Humanities magazine, a publication of the National Endowment for the Humanities.” Please notify us at @email if you are republishing it or have any questions.