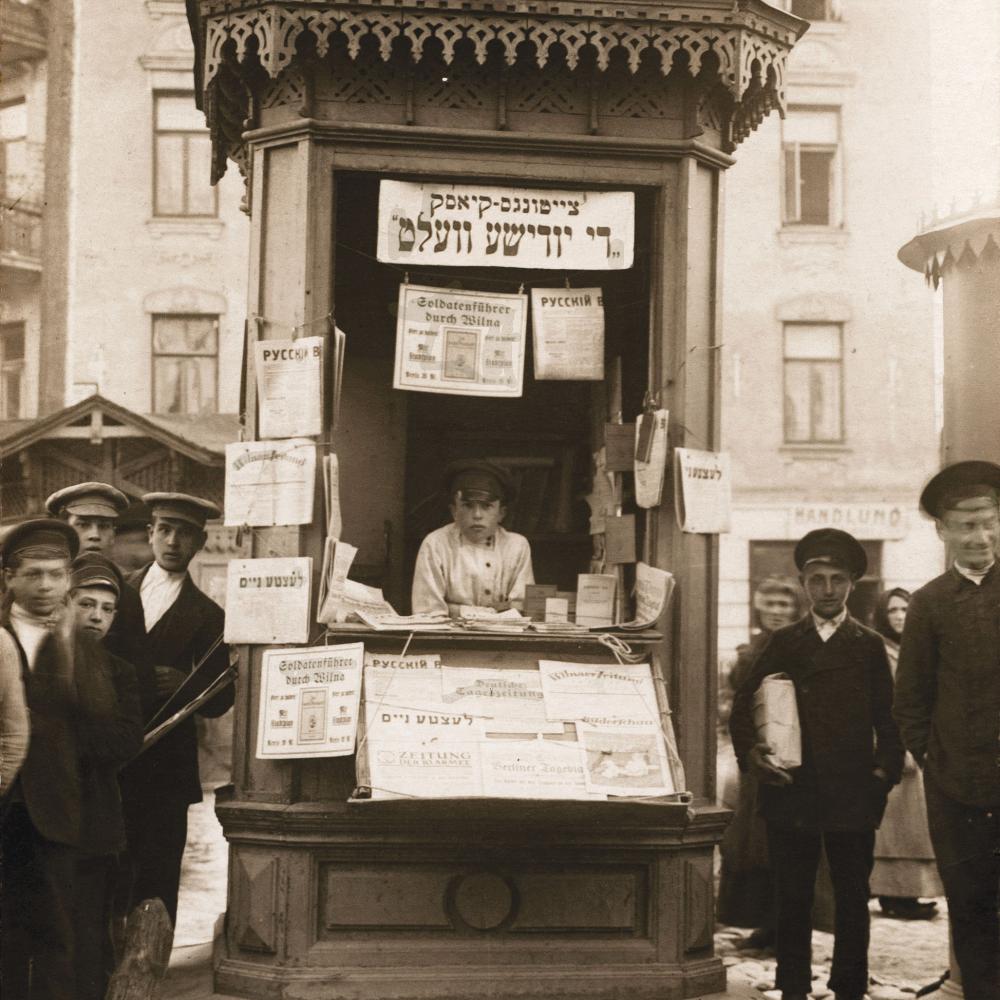 A newspaper kiosk in Vilnius sells Die Yiddishe Welt or The Yiddish World.

During World War II, the Einsatzstab Reichsleiter Rosenberg (ERR), a task force of the Nazi Party, looted museums, libraries, and other cultural institutions throughout Europe. In Vilnius, Lithuania, the ERR ordered a group of forty Jewish intellectuals to help them ransack YIVO, the Yiddish Scientific Institute, founded in 1925 and associated with such Jewish luminaries as Albert Einstein, Sigmund Freud, and Marc Chagall.

While murdering close to 90 percent of the Jews in Lithuania, Nazis shipped their looted selection of Jewish holdings to Frankfurt to be used, perversely, at an institute dedicated to studying the so-called Jewish question.

YIVO was not only the pride of an old community of Jews in Vilnius. Its collections contained records of Jewish life throughout Eastern Europe: handwritten manuscripts of Jewish poets and novelists, papers of major scholars and leading rabbis, ephemera of Yiddish theater, and records of civic institutions.

The Jewish intellectuals assigned by the Nazis to sort through YIVO’s collections saved many materials by secreting them away. Around the same time, YIVO was reestablished in New York City and, after the war ended, became, with the help of the U.S. Army, the repository for most of the materials from Yivo in Vilnius that the Nazis had sent to Germany.

At the end of the Cold War, more books and materials from the original YIVO turned up in other libraries and institutions. Thousands of Jewish books, saved by the Lithuanian librarian Antanas Ulpis, a gentile, were found in the basement of a church in Vilnius. In 2017, an additional 170,000 documents were discovered in the same basement.

YIVO’s digital collections include notebooks of poetry by the Yiddish novelist Chaim Grade, letters by Sholem Aleichem, the writer whose stories formed the basis for Fiddler on the Roof, original manuscripts by the Yiddish poet Abraham Sutzkever, and an eighteenth-century manuscript on astronomy by Issachar Ber Carmoly, the rabbi of Soutz, Alsace. The collections also contain many a specimen of everyday life, such as hundreds of essays from the 1930s, written by young Jews and submitted for contests, sponsored by YIVO, on what their lives were like. Jack Jacobs, a historian at City University of New York, has noted, “It is simply impossible to write a dissertation or do any serious research project related to Eastern European Jewry without consulting the YIVO materials.”

Working with libraries in Lithuania, New York’s YIVO is now in the midst of a seven-year project, supported by NEH, to reunite, preserve, digitize, and make publicly available YIVO’s original collection.

In 2016 and 2019, the YIVO Institute for Jewish Research in New York City received NEH grants, totaling $360,000, to support digitization of its Vilna Collection and to support work on the 170,000 new documents discovered in 2017.

The text of this article is available for unedited republication, free of charge, using the following credit: “Originally published as “Documents of Yiddish Life” in the fall 2019 issue of Humanities magazine, a publication of the National Endowment for the Humanities.” Please notify us at @email if you are republishing it or have any questions.