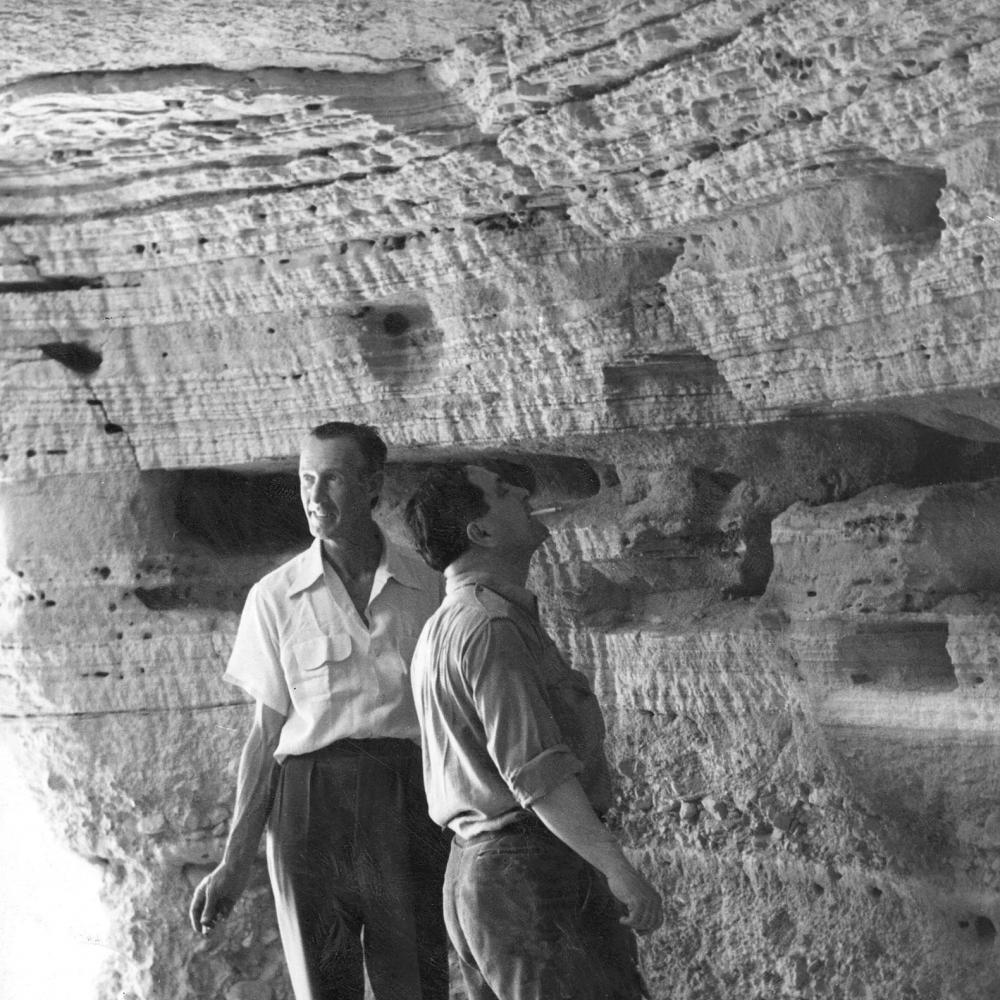 British archaeologist G. Lankester Harding (at left) in the early ’50s, standing in one of the caves where the Dead Sea Scrolls were discovered.

The most extraordinary archaeological discovery of the twentieth century was the result of a curious Bedouin shepherd tossing a rock into a cave near the Dead Sea.

The tinkling sound of breaking pottery piqued his curiosity, and inside he and his companion discovered a collection of pottery jars, one of which contained three immaculately preserved scrolls. Soon other scrolls were found in the same cave and nearby ones. Eventually some eight hundred manuscripts in Hebrew, Old Canaanite, Aramaic, Greek, and Latin, dating from Jerusalem’s Second Temple period, emerged. These scrolls included some of the oldest extant fragments of the Hebrew Bible as well as religious writings, hymns, prayers, and legal documents. The Dead Sea Scrolls, as they would soon become known, would revolutionize the study of religious history, including the history of Judaism.

In addition to the intact scrolls, there were fragments of others that had not been as well protected. These fragments, painstakingly reassembled by scholars, have further enhanced our understanding of the Hebrew Bible, its era, and the traditions that proceed from it.

One of the most renowned scholars of the Dead Sea Scrolls is Eugene Ulrich, who until his retirement in 2013 was the John A. O’Brien Professor of Hebrew Scripture and Theology at the University of Notre Dame, chief editor of the Biblical Scrolls program, and a translator of the New Revised Standard Version (NRSV) of the Bible. The NRSV translation of several Old Testament passages is informed by the Dead Sea Scrolls.

Over a period of nearly four decades, the National Endowment for the Humanities has awarded grants, totaling more than $1.6 million, in support of Ulrich’s important work. These funds have supported the publication of dozens of volumes of the Dead Sea Scrolls.

The Dead Sea Scrolls, Ulrich said in a recent interview, “have done more than give us a new reading of the Bible; they have also greatly illuminated the period in which they were composed.” Among other things, the scrolls have “shed a lot of light on the history of Judaism, showing a spectrum of Jewish belief.”

NEH funding made it possible for Ulrich to travel to Jerusalem with graduate assistants, a number of whom have gone on to become noted biblical scholars themselves. The grants also allowed Ulrich and his colleagues to employ sophisticated computer technology to analyze the scrolls and more carefully reassemble the fragments into a coherent whole. The digitization of the results provides scholars and students around the world with access to these historic texts.

Work on the scrolls is passing into the hands of a new generation of scholars, while various key projects continue to draw NEH support. In 2019, a $300,000 grant was awarded to Alison Schofield, associate professor of religious and Judaic studies at the University of Denver, for a project that will produce a new scholarly edition and English translations of the first scrolls found in Cave 1, which thus far have been published only in French. This endeavor will use scroll fragments unavailable for the previous edition and employ state-of-the-art photographic technology. It will provide new introductions and commentary to further enhance our understanding of the Bible as well as the origins of Christianity and its relationship to Judaism.

Michael F. Bishop is a consultant in the Office of the Chairman at the National Endowment for the Humanities.

Since 1977, Eugene C. Ulrich has received thirteen NEH grants for a total of more than $1.6 million for work on the Dead Sea Scrolls.

The text of this article is available for unedited republication, free of charge, using the following credit: “Originally published as “Dead Sea Scrolls” in the fall 2019 issue of Humanities magazine, a publication of the National Endowment for the Humanities.” Please notify us at @email if you are republishing it or have any questions.