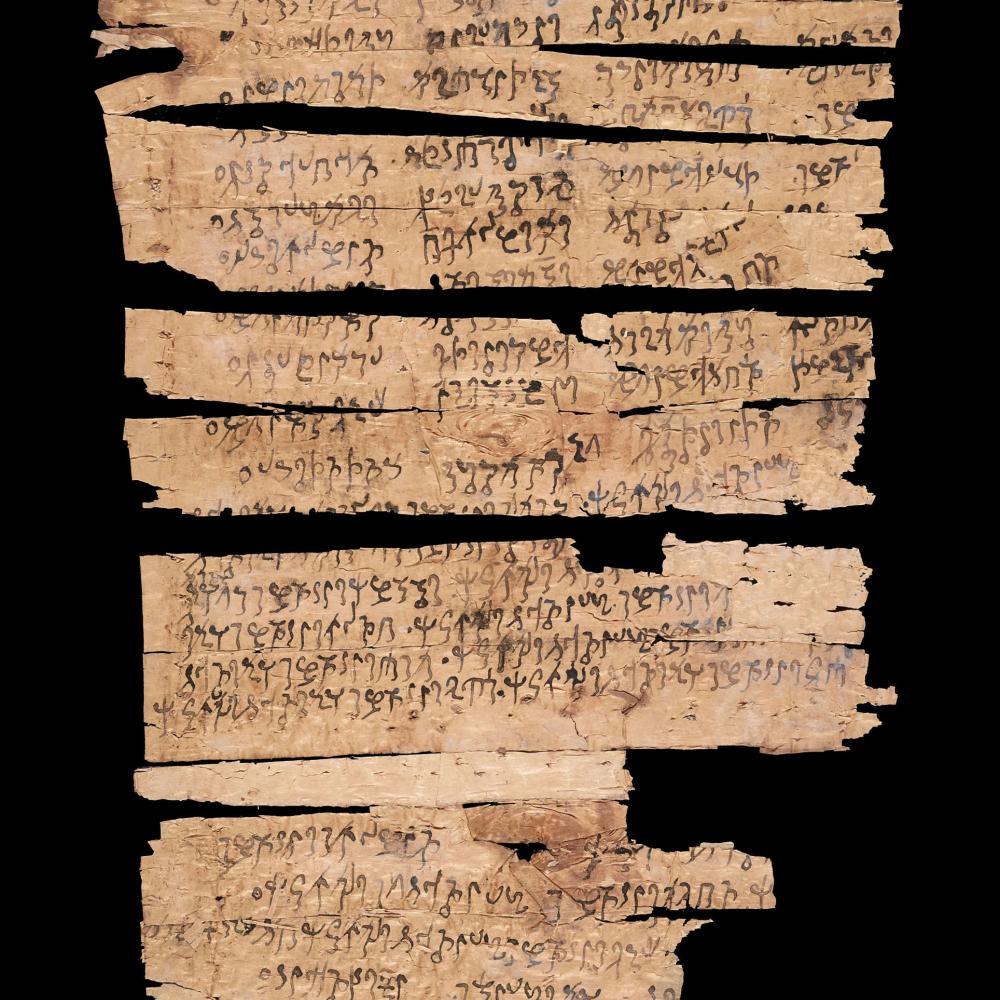 “Extremely fragile, do not open unless necessary” read the note that came with a two-thousand-year-old scroll acquired by the Library of Congress in 2003. Early this year, curators announced that they had at long last been able to unroll and digitize the fragile document known at the library as the Gandharan Scroll.

Making the Gandharan Scroll accessible through digitization has been worth the risk. It’s part of a far-flung group of scrolls and fragments that represents the oldest known Buddhist texts in the world. The British Library acquired several scrolls in 1994. Since then, another two hundred or so have surfaced in private collections in England, Norway, the United States, and elsewhere.

Created between the first century BCE and the third century CE in the ancient crossroads of Gandhara, now the northern borderlands of Afghanistan and Pakistan, these texts contain previously unknown examples of Buddhist literature as well as local iterations of familiar tales. They hold clues to the development and transmission of Buddhism as it spread from its Indian birthplace to Central Asia and China along the Silk Road, according to the NEH-supported Early Buddhist Manuscripts Project (EBMP).

The project is housed at the University of Washington, where its director, Richard G. Salomon, is an emeritus professor of Sanskrit. For more than 20 years, EBMP’s team of scholars and linguists has been systematically studying and publishing the texts as they have come to light. Digitization has given the work a major boost. Unrolling the scrolls is “a dangerous and difficult process,” Salomon says. “Ninety percent of the work is done from the digital images.”

Likely written by Buddhist monks—sometimes ritually buried with them—the Gandharan scrolls contain “a little bit of everything, and by ‘everything’ I meant the many different genres and types of Buddhist literature,” Salomon says. About half feature iterations of well-known texts like the Rhinoceros Sutra, which Salomon describes as “a short Buddhist poem on the ideal of being solitary and avoiding society, like the rhinoceros.”

The other half contain local or previously unknown examples of sacred Buddhist literature. For instance, some make use of regional situations and characters, including particular monks and nomadic rulers of Gandhara who invaded, took power, and embraced Buddhism. “That was a really exciting discovery, because that showed us the local conditions of Buddhism, and gave us a dating range for this material,” Salomon says. One text features a philosophical debate between a monk and a general about a central Buddhist concept: what it takes to be a good man.

The fragments offer clues to religious history as well. A dozen or so of the scrolls have helped confirm that Mahayana Buddhism—which Salomon calls a “radical reinterpretation” of Buddhism, roughly equivalent to the Protestant Reformation in Europe—likely developed in the first and second centuries CE. Such findings have set off conversations not only among scholars but among practicing Buddhists too, he says.

The scrolls contain linguistic treasures as well. They’re written in Gāndhārī, a vernacular derivative of Sanskrit; Kharoṣṭhī, the script used to actually set down the words on birch bark, derives from Aramaic, according to Salomon.

Evolving as it did in a fertile region of cultural interchanges, Gāndhārī “became a major literary language,” he says, “by being in the right place at the right time.” The writing style in the scrolls and fragments has the kinds of rough edges and idiosyncrasies that, as with Old English, signal a language in the process of evolving and flowering. “There’s no standardized spelling,” Salomon observes. “The same word can be spelled three or four different ways.”

“It’s a linguistic adventure,” he adds—one likely to take generations of careful scholarship to complete.

Since 1999, the Early Buddhist Manuscripts Projects has been supported by six NEH grants, totaling $1,163,000.

The text of this article is available for unedited republication, free of charge, using the following credit: “Originally published as “Early Buddhist Manuscripts” in the fall 2019 issue of Humanities magazine, a publication of the National Endowment for the Humanities.” Please notify us at @email if you are republishing it or have any questions.