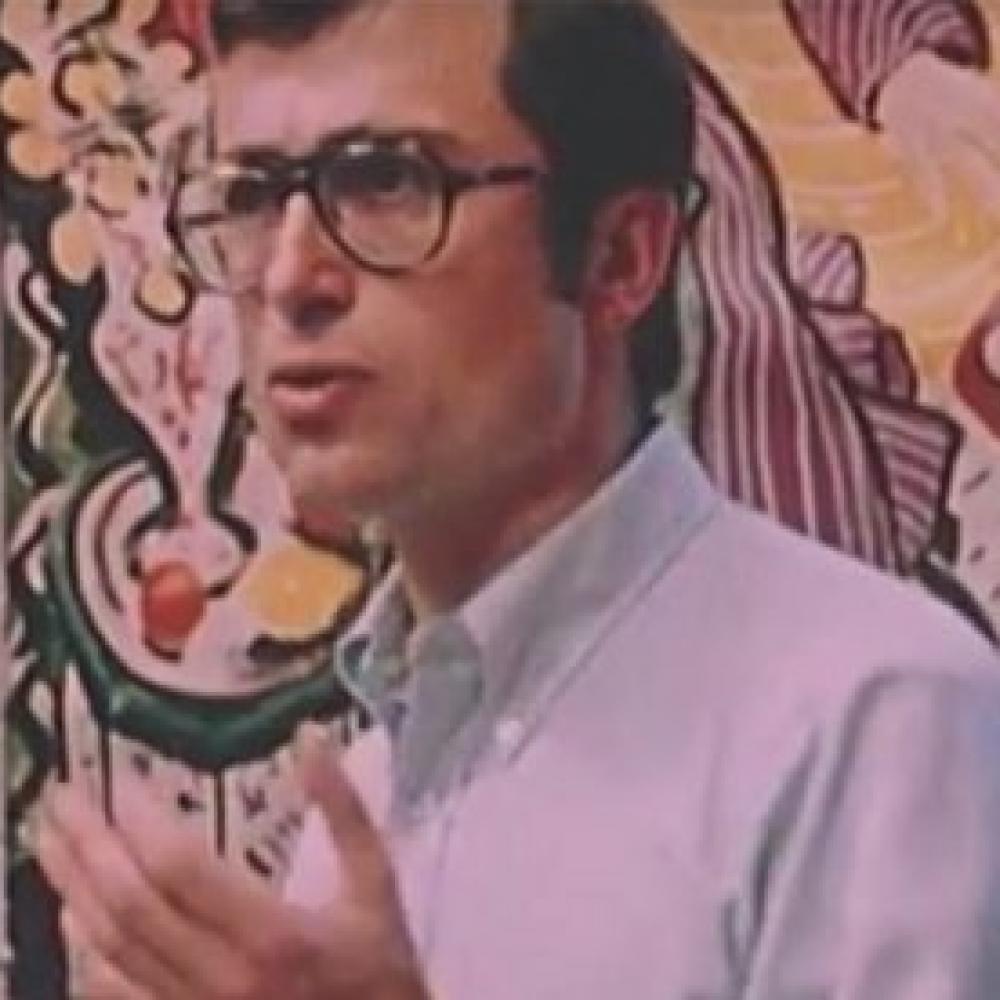 It is the mid 1970s and Andy van Dam is explaining to students at Brown University how hyperlinks will allow them to read a poem and learn background information about the text while also enabling them to trade comments with others.

Worried about the decline of literacy, an overworked English professor turns to technology to engage students daunted by complex literary texts. It could be a 2016 case study in humanities education. But that scenario played out more than 40 years ago at Brown University, when Robert Scholes, a professor of English, wanted to find a fresh approach to teaching English and American poetry to easily distracted, poetry-averse undergraduates. 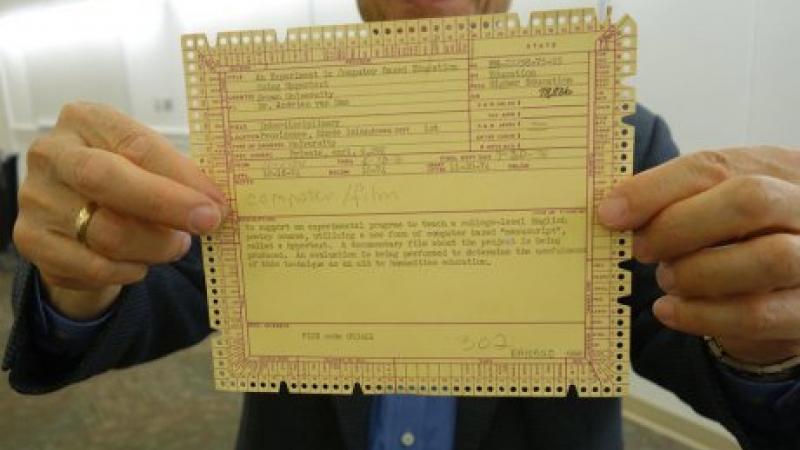 Andy van Dam flashes the McBee punch card recording details of the grant NEH awarded him for this experiment in computer-based education. 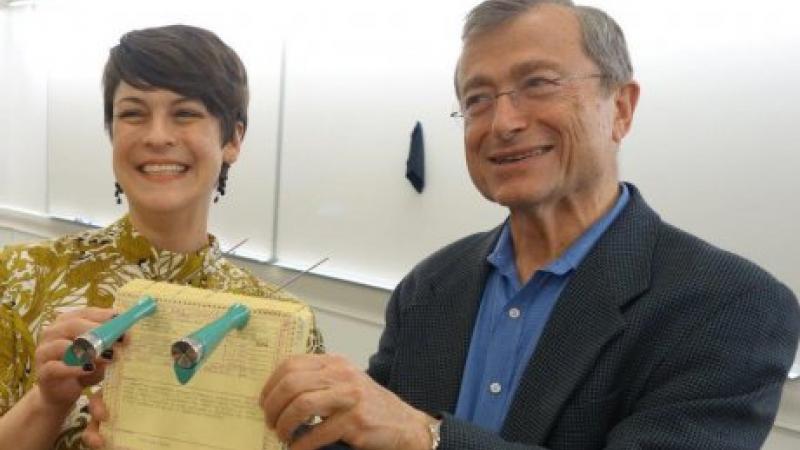 Ann Sneesby-Koch of NEH spent 18 months digitizing over 12,000 McBee punch cards containing details of NEH's earliest grants. She stands next to Andy van Dam, holding up the card for the grant he received in 1974 along with two of the separating tools used to sort records in this elaborate filing system.

Help arrived in the form of Andries (“Andy”) van Dam, a professor of computer science at Brown and a giant in the field of computer design. Students of van Dam’s went on to influential jobs, working with Steve Jobs at Apple and at Pixar Studios. Stories circulate that the character Andy in Toy Story is based on van Dam, and that Andy in the film has a copy of Computer Graphics: Principles and Practice, a classic coauthored by the Brown computer scientist, on his bookshelf.

Digital humanities projects have come into their own in recent years, their rise fueled in part by grants from NEH’s Office of Digital Humanities. But in the 1970s a computer scientist still seemed like an unlikely pedagogical ally for a humanities professor.

Van Dam, though, had been exploring how to use computing power for all kinds of research, defying administrators who believed that expensive mainframe time should be reserved for the hard sciences. Humanists, one told him, should write their papers on typewriters and leave computing to physicists and engineers.

Undeterred, van Dam secured a grant from the education division of the National Endowment for the Humanities to support what he called “an experiment in computer-based education using hypertext.” He and Scholes set out to test whether computers could engage students in deeper analysis of undergraduate-daunting poets like Wallace Stevens.

“An Experiment in Computer-Based Education Using Hypertext” was one of the earliest experiments in what’s now known as digital humanities, and one of the first grants NEH made to support such work. The experiment was also captured in a short 1976 film, made by the research team as part of documenting its work. Hypertext: An Educational Experiment in English and Computer Science at Brown University had a public screening this past April at the University of Maryland at College Park, hosted by the Maryland Institute for Technology in the Humanities, or MITH, with van Dam in attendance.

The humanities equivalent of an industrial film, the 15-minute-long documentary looks quaint at first. An offscreen narrator guides viewers through a vista of traditional library stacks—a nod to the limits of traditional methods of storing and retrieving information—then segues into the experiment itself.

Scene: Instructors sit around a table with scissors and bottles of glue, cutting and pasting selected passages of poetry to be entered into the system. Scene: A student with long, stick-straight 70s hair, hands and arms covered in rings and bracelets, pokes with a stylus at glowing green letters on a blocky computer monitor. Scene: An instructor with red pen in hand pores over sheaves of green-and-white-lined computer printouts, reading comments students have entered into the program.

The technology on display in the film looks its age. The early 1970s were still the era of high-rent, room-sized computers, with processing time rationed like gasoline in wartime. Steve Jobs wouldn’t debut the Macintosh personal computer for another decade. The terminals on which Scholes’s students worked look like boxy Victrolas compared with the sleek laptops of today. The film and grant that produced it were nearly forgotten for a long stretch of time, rediscovered only when NEH staff dug into the files and digitized more than 12,000 early grants recorded on so-called McBee KeySort punch cards, a kind of glorified sortable index-card system.

But as Matthew G. Kirschenbaum, an associate professor of English at UMD, said at the screening, the film offers “a glimpse into the prehistory of the glowing glass screens that fill our days.” Many of the ideas and strategies van Dam and Scholes pursued feel remarkably current, beginning with the pedagogical crisis the experiment hoped to address.

“We face a very simple problem: the decline of literacy, which anyone can see in the latest test scores,” Scholes says in the film. “Students are ill at ease with language or just plain scared of poetry.”

Instructors, then as now, felt they lacked the time and support to provide enough individual attention to students. “We’re short on resources and manpower,” Scholes said, a sentiment that almost anyone working at a college or university today will probably appreciate.

In Hypertext, a younger van Dam, sporting aviator glasses and a short-sleeved shirt, explains the goal of the experiment from a computer-science perspective. The team wanted students to be able to interact via computer with selections of poetry and supplemental materials, with professors, and with each other—very much like collaborative learning approaches in vogue now.

Students and instructors in 2016 tend to take networked, hyperlinked content for granted. To make it possible in 1974, van Dam and his team used FRESS, short for File Retrieval and Editing System, a hypertext system he had developed at Brown. FRESS was the successor to the first-ever such system, HES, or Hypertext Editing System, which van Dam had built with Theodor (Ted) Nelson, the man who coined the word “hypertext.”

Using hypertext in Scholes’s poetry course made it possible for students to click directly through to commentary and context about the poems on the syllabus, and to follow trails through an accumulation of sources and annotations. That’s what Vannevar Bush envisioned in his landmark 1945 essay “As We May Think,” an essay that continues to inform van Dam’s thinking.

The film features a scene in which van Dam invokes that central idea of Bush’s. A student “can blaze a new trail by looking at themes or at images in a set of poems and entering his thoughts into the hypertext for others,” the Brown computer scientist tells a roomful of listeners. “This kind of selective browsing and adding to the ‘creative graffiti,’ you might call it, we hope to use to develop a different kind of community, with professors and students working together to develop a true process of learning.”

Jump ahead 40 years and that “process of learning” has become a standard approach in many humanities courses, where students, teaching assistants, and professors trade ideas and interpretations via group blogs and shared online annotations. “What I’m most proud of is we built, in effect, the world’s first online scholarly community,” van Dam said in an interview. Using technology to create a community, scholarly or otherwise, depends on what he calls “this beautiful interaction between computers and the humanities.”

What began as a way to organize material in an engaging way for students turned into “a communications instrument of extraordinary richness and subtlety,” Scholes says in the film. Students who took part in the hypertext experiment, van Dam said at the University of Maryland screening, wrote substantially more than their counterparts who took the offline version of the course.

That sense of engagement appears to have surprised the students themselves. Some participants did not anticipate having a beautiful relationship with their machine teaching assistants. Several of those interviewed for the documentary talk about their surprise when they discovered that computers and poetry weren’t antithetical.

“I didn’t see how they could get a course that I thought was emotional and sensitive and combine it with a computer, which I thought was so cold,” one says. She goes on to talk about how much the hypertext approach enhanced her appreciation of poetry.

The interfaces of 2016 feel very different than those of 1974, and not just in design and size. The idea of computers as “cold” feels outdated in this era of ubiquitous computing, when people move through their daily routines with smartphones always in hand. Our devices feel like networked extensions of ourselves.

“We’re all comfortable with computers nowadays,” van Dam says. “We don’t treat them as alien. In fact, we’ve swung over to an extreme opposite end, where people are in love with their iPhones and can’t bear to be away from them.”

In the 1970s, though, handheld computers were still a Star Trek dream, and hypertext could still be dismissed as a novelty with limited potential. When van Dam applied for another grant in 1976, the endowment’s reviewers shot down the proposal. “There is little indication that this project will uncover anything new about the possible uses of hypertext or that hypertext is worth large-scale application,” NEH staff wrote, summarizing the panel’s conclusion.

Brett Bobley, director of the endowment’s digital-humanities office, got a laugh out of the audience at the recent screening of Hypertext when he read that judgment aloud. Without linked text systems, the Internet we spend so much time with today wouldn’t exist, at least not as we know it. “You could make a valid argument that there has never been an application with a larger scale than hypertext,” Bobley says.

The National Endowment for the Humanities along with the Maryland Institute for Technology in the Humanities (MITH) and the Human-Computer Interaction Lab, both at the University of Maryland, College Park, hosted a screening of Hypertext: An Educational Experiment in English and Computer Science at Brown University and discussion with Andy van Dam on April 25, 2016. Following was a panel discussion with van Dam, Ben Shneiderman (UMD Department of Computer Science), Kari Kraus (UMD iSchool and English Department), and Brett Bobley and Ann Sneesby-Koch (NEH Office of Digital Humanities). MITH’s associate director, Matthew Kirschenbaum, moderated the panel. Hypertext can be viewed online.