Election season in a city controlled by nativist hoodlums. 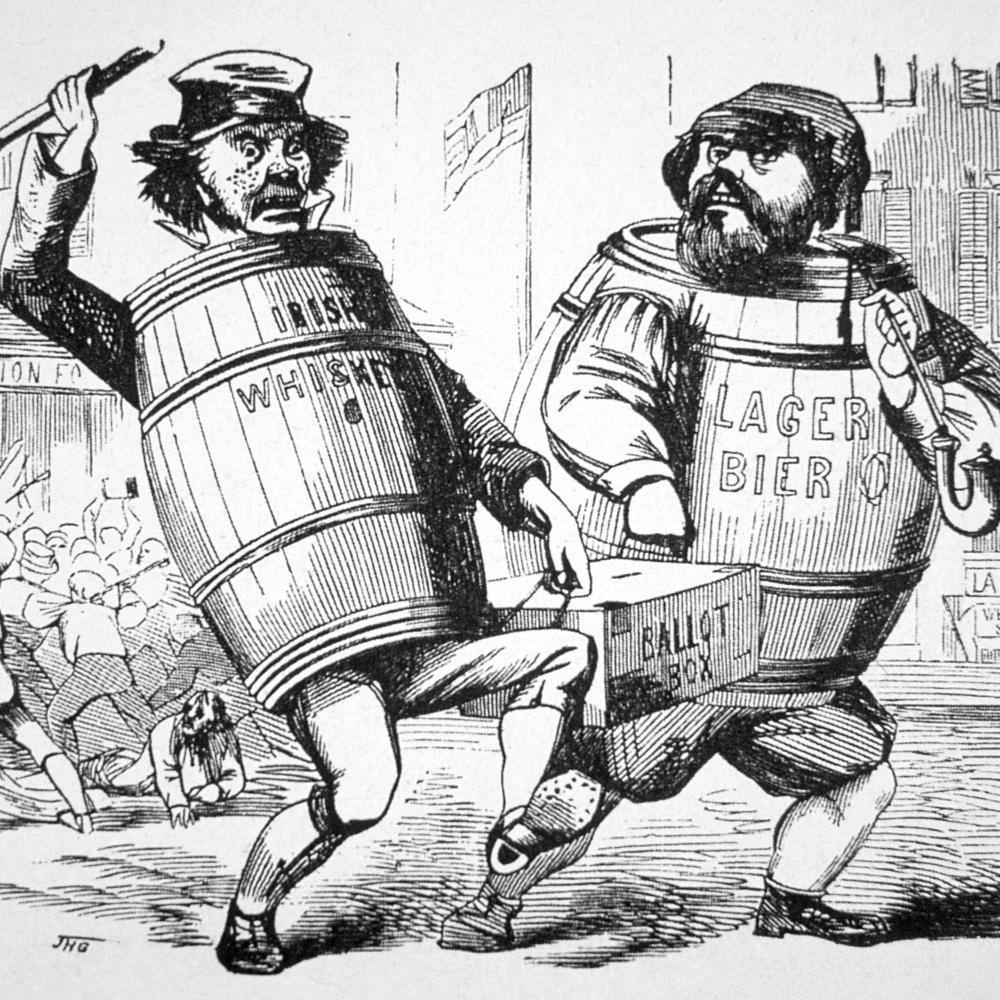 Political cartoon for the Know Nothing Party

The 2008 presidential election has generated unusual enthusiasm, but in the weeks following the vote, we can expect the usual complaints about how the political process has been corrupted by the influence of special interests, the superficiality of sound-bite media coverage, or the narrowness of the single-issue political action committees. Skeptics will say that the process has veered from a simpler past when “one man, one vote” prevailed and democracy worked. Yet even a cursory survey of political history shows that American elections have often been fraught with problems, from the graveyard voter and the backroom fixer to the fact that for much of our history most of the current electorate—men without property, women, and Blacks—could not vote.

Perhaps the electoral process was never worse than in the years leading up to the Civil War, and nowhere was it as horrid as in Baltimore, which earned the nickname Mobtown largely due to the intimidation, riots, and murder that accompanied elections. During the 1850s, political clubs with names like Plug Uglies, Rip Raps, American Rattlers, and Blood Tubs arose in cocked-fist reaction to an unprecedented influx of immigrants, staggering in from the docks of this port city. These were America's first urban immigrants, mostly Irish and Germans escaping famine and social unrest in Europe. Between 1830 and 1860, their numbers pushed Baltimore’s population from 80,000 to 212,000. Nearly 25 percent of the city had become foreign-born.

The newcomers were often desperately poor, cluttering the almshouses, orphanages, hospitals, and jails. Worse still, from a native perspective, many were Roman Catholic. The Irish, in particular, were seen as drunken, belligerent foot soldiers of a corrupt Pope who had political designs on North America, while many of the Germans were seen as disgruntled refugees, exiles from a higher civilization forced to settle in a lower one. These aliens became citizens within a few years, able to vote and hold office.

Jacksonian notions of enfranchising the common man and providing jobs in return for votes gained a foothold in America's expanding cities. Politics and patronage were unabashedly intertwined, and local bosses, especially among the Democrats, sought immigrant support through the promise of jobs and preferment. Native-born residents felt dispossessed and flocked to the newly emerging American party, also known as the Know Nothings because of their stock responses to questions about clandestine activities. Protestant Baltimoreans formed the backbone of the party. Their slogan—“America for the Americans”—voiced the goal to reduce the political influence of the immigrants.

Baltimore’s patchwork of neighborhoods provided the setting for confrontations between natives and newcomers. Most common were what contemporary observer Thomas Scharf dryly called “the ordinary acts of riot and intimidation”—the predictable brawls that followed baseball games, holiday parades, fishing trips, and tavern crawls, with one group of men squaring off against another. Yet, in offering opportunities for mayhem, the usual social round paled by comparison to election season. Municipal elections in September, city council polling in October, and the presidential vote in November crammed into the space of a few weeks mass meetings, campaign rallies, torchlight demonstrations, partisan parades, and the actual vote—all occasions for what Scharf describes as “raw heads and bloody bones.”

Election rallies were massive provocations, mixing theatrical spectacle with guerrilla warfare, Fourth of July pageantry with thuggery. The American clubs regularly held torchlight processions or grand illuminations featuring floats, fireworks, effigies, banners, speeches, and songs. Because the party that ruled the streets held sway at the polls, partisans regularly marched through opposing wards. They also infiltrated opposition rallies, where they threw the crowd into disarray by jabbing bystanders with the easily concealed shoemaker's awl, similar to a short ice pick. So beloved was the lowly awl that shortly before the presidential election in 1859, the American clubs engaged blacksmiths to forge them en masse, handed out flyers announcing their distribution, and incorporated the awl's image into club banners. A favorite featured “the figure of a man running, with another in pursuit, sticking him with an awl.” At the polling places, the Plug Uglies strapped awls to their knees, surrounded suspect voters and “awled” them into retreat. “Come up and vote; there is room for awl!” became one of many election-time chants intended to amuse and intimidate.

Casting a vote was not the private act that it is now. Baltimore was divided into twenty wards, each with one polling place, a dominant political club, ward boss, and favorite sons. Casting one's ballot meant having to wait in line before passing through a gauntlet of partisans to drop a distinctly marked ticket into a ballot box overseen by judges. Immigrants had to present their naturalization papers. Merely looking German in a Yankee ward or trying to cast a Democrat ticket at a Know Nothing polling place brought a sound beating or worse.

Not surprisingly, the disparity in votes among wards was stark. In the 1856 election, 1,013 Democratic votes were tallied in the immigrant 8th Ward, home of the Irish Bloody Eights, while only one Democratic vote was counted in the Plug Ugly’s 20th. Know Nothing candidate Millard Fillmore got 21 percent of the vote nationally, but 55 percent in Maryland, the only state he carried, largely due to the Baltimore vote.

Not content merely to subtract from the opposition vote, the nativist gangs also sought to multiply votes for their own candidates. A favorite strategy was “cooping.” For days before an election, Scharf writes, “honest gentlemen as well as unfortunate wretches,” many of them immigrants, would be abducted by the gangs and transported to cellars or sheds—“coops”—where they would be held under conditions described by one victim as “disgusting and horrible in the extreme.” Sometimes forced to drink large quantities of whiskey, the hapless captives were invariably robbed and beaten before being transported to the polls in small groups to vote, and vote again.

Peter Fitzpatrick testified that he was kept in Plug Ugly Raz Levy’s coop, where he recalled that a fellow captive, a German immigrant “had a large beard, and Crab Ashby took a candle and . . . burnt it off.” In 1858, John Justus Ritzius recounted being forced to vote sixteen times in several wards. Given that a single coop might hold as many as ninety captives, the potential for inflating the turnout was prodigious. That year, independent mayoral candidate Colonel Schutt ran against Know Nothing incumbent Thomas Swann. Observing that attempts to vote for him promised “loss of life and the general disorder of the city,” the civic-minded Schutt made what is perhaps the earliest concession speech in American history, bowing out of the race at noon on Election Day.

Described as “pitch battles” involving hundreds of fighters, Baltimore riots ranged far and wide, shifting from ward to ward. With picks and axes, combatants dislodged cobblestones and bricks for ammunition. After the fray, the streets were strewn with bricks and the air reeked of gunpowder. It was not the brickbats that made these battles especially lethal, it was guns-pistols, muskets, short rifles, and occasionally even cannons. Each election season between 1854 and 1858, a dozen or more were killed, with Scharf estimating 1856 casualties to number 30 dead and 350 wounded. By 1857, reformers claimed that the city's Democrats had been virtually disenfranchised. The Know Nothing party had captured the Governor's Office, the House, the Senate, as well as the congressional delegation. According to historian Jean Baker, Maryland became “the banner Know Nothing constituency,” largely due to the anti-immigrant rhetoric of the politicians and the brutal tactics of their supporters.

The Know Nothings enjoyed political victories in other states as well, but their ascendance was short-lived. They were never able to unite disparate regional interests under a nativist consensus, and on the eve of the Civil War, slavery and states' rights overshadowed immigration as a national issue. The violence and intimidation that characterized the rise of the Know Nothings mark a low point in American politics, an ugly reaction to immigration. America is once again experiencing a controversial wave of immigration, but the son of an African immigrant vies for our nation's highest office. Clearly, we have come a long way in 150 years.

Martin Ford, associate director at the Maryland Office for New Americans, is a member of the Maryland Humanities Council’s Speakers Bureau. More information about antebellum Baltimore’s gangs can be found in Thomas Scharf’s The Chronicles of Baltimore, 1874, or Tracy Melton’s Hanging Henry Gambrill: The Violent Career of Baltimore’s Plug Uglies, 1854-1860, 2005.