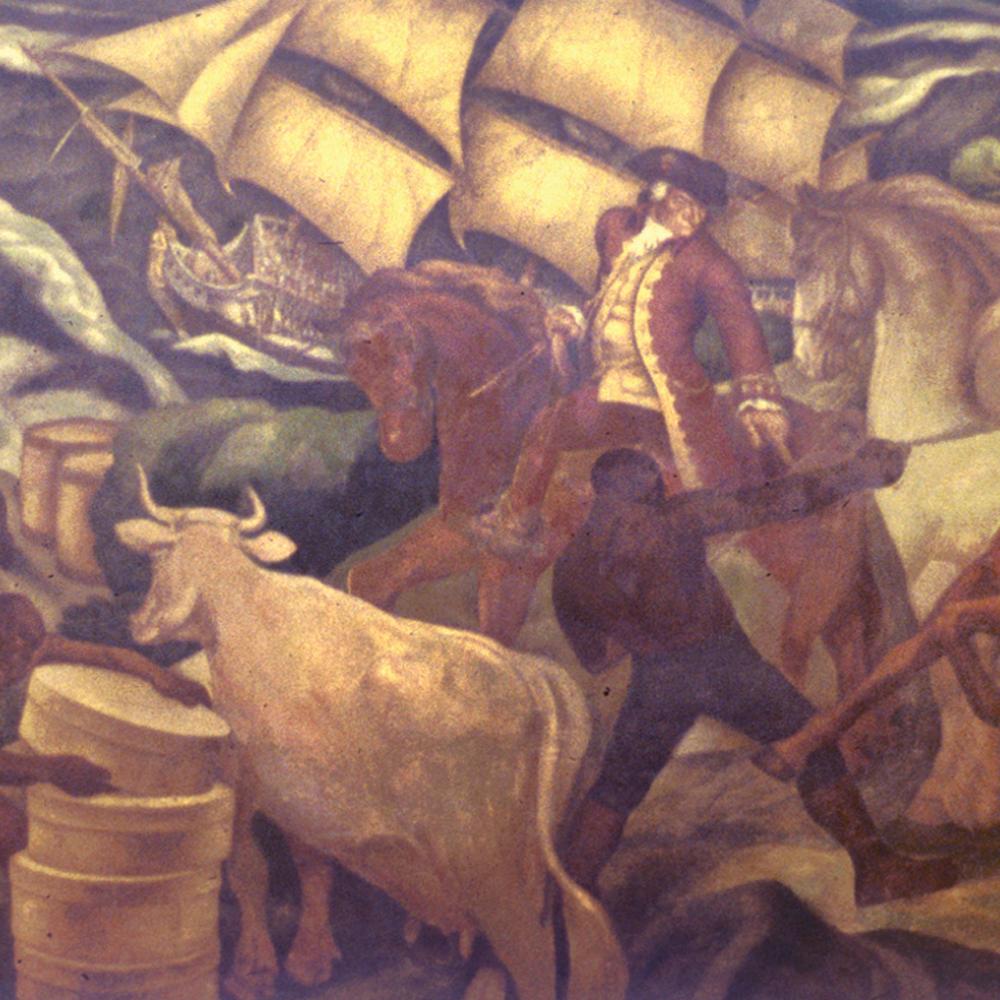 The Economic Activities of the Narragansett Planters, 1939, commissioned by the U.S. Treasury Department, is artist Ernest Hamlin Baker’s take on slavery as practiced in Rhode Island in the eighteenth century. Importing molasses, or smuggling it along the highly irregular coastline, and breeding horses such as the celebrated Narragansett Pacer, were among the more lucrative activities. This was accomplished, as the mural depicts, through slave labor.

Property of the U.S. Postal Service

Familiarly known as the “Ocean State,” Rhode Island’s full official name includes “and Providence Plantations,” words the state legislature has resolved to drop. Voters will have a chance to weigh in on November 2. In the meantime, the Pettaquamscutt Historical Society in Kingston has mounted an exhibit asking, “What’s in a Name?” Running through November, the exhibit contains maps, documents, panel displays, and paintings that provide context and historical explanations for the original political, economical, and geographical designation of the former colony.

“Rhode Island and Providence Plantations” appeared on the charter granted by Charles II in 1663. The settlements incorporated under the charter—Providence, Portsmouth, Newport, and Warwick—were based on agriculture, hence the seemingly full extent of the meaning of “plantation” used at the time by planters around Narragansett Bay. In mid-seventeenth-century New England, the present-day connotation of “plantation” as a Southern estate wholly supported by the labor of enslaved Africans did not exist. The word’s meaning was entwined with the idea of a settlement in a new region. Complicating matters, though, is the fact that black slaves were, indeed, present in Rhode Island by 1652, and by the end of the seventeenth century, they were used for both trade and labor. So, the entire official state name had been in place during times when black slaves did, in fact, contribute to Rhode Island’s economy.

The transfer, in 2003, of regional artist Ernest Hamlin Baker’s highly evocative 1939 The Economic Activities of the Narragansett Planters to the historical society was a watershed moment. Gracing the walls of the Wakefield post office for decades, the mural went underappreciated for its representation of Rhode Island history, but by the time the post office closed in 1999 and the mural found a new space at the historical society, it was seen in a different light. The New Deal arts program that commissioned Baker’s piece strove to represent the value of the common man’s diverse contributions to local cultures and economies. Baker chose to depict the considerable contributions of enslaved Africans to the colony’s wealth.

In one respect, at least, the vote is already in: A deeper appreciation of and respect for Rhode Island’s long complex history and all those who contributed to it has been registered.