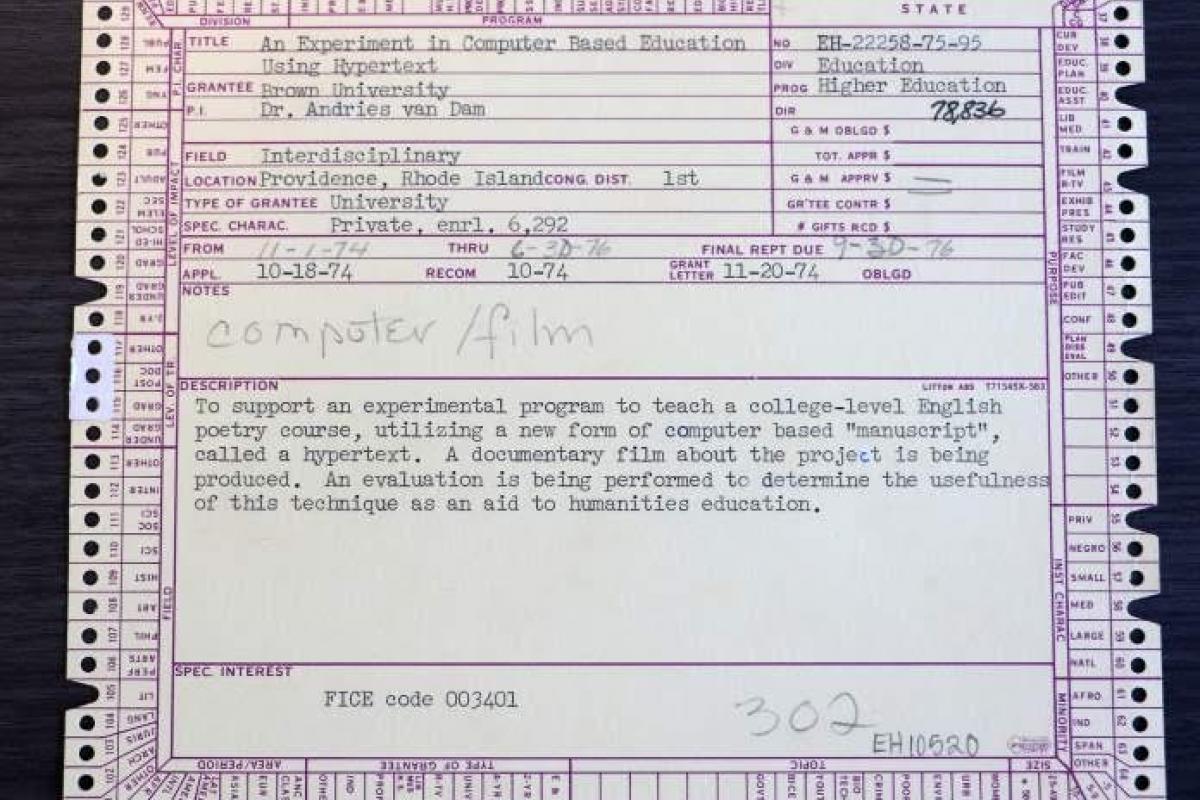 As featured in Time, the McBee edge-notched punchcard for a grant to support "An Experiment in Computer Based Education Using Hypertext."

On April 25, 2016 the NEH invites you to attend a film screening and panel talk at the University of Maryland to celebrate the work of Brown University professor and NEH grantee Andy van Dam. This free event will be the first public screening of the 1974 documentary Hypertext: An Educational Experiment in English and Computer Science at Brown University, and will be followed by a panel discussion with Professor van Dam, UMD professors, and representatives from the National Endowment for the Humanities. The event begins at 7:30PM at the University of Maryland in the auditorium at 0320 Tawes Hall (directions here).

This film has a remarkable history, emerging from a 1974 NEH grant that had been largely forgotten until we embarked on a project to go back and digitize over 12,000 NEH grant records and open them up to the public via our Funded Projects Query Form in September 2015.  An Education Program grant to fund  “An Experiment in Computer Based Education Using Hypertext” was awarded to Professor Andy van Dam of Brown University and supported “an experimental program to teach a college-level English poetry course, utilizing a new form of computer based ‘manuscript,’ called a hypertext.” Hypertext is, of course, why you’re able to read this, right now, right here. It is the underlying concept that organizes information on the web. In 1974, however, it was still largely theoretical and its uses in the humanities classroom unproven. The project proposed “an evaluation…to determine the usefulness of this technique as an aid to humanities education.” Since then, well over 40 years later, van Dam’s research has had a remarkable influence on how we now use the web and its resources in classroom settings.

Join Professor Andy van Dam on April 25, 2016 for Computer Science and the Humanities Then and Now, a film screening of a documentary of van Dam's early work with hypertext. A panel discussion with Professor van Dam, Ben Shneiderman, Kari Kraus, Bret Bobley, and Ann Sneesby-Koch will follow.

The grant also funded the making of a documentary film about this experimental project, showing collaborative work between humanities scholars and computer scientists and the intersection of humanities scholarship and technology. The film has not enjoyed public viewing since the 1970s, that is, until now. The National Endowment for the Humanities, the Maryland Institute of Technology in the Humanities (MITH) and the Human-Computer Interaction Lab, both at the University of Maryland, College Park, will be hosting a very special event, Computer Science and the Humanities Then and Now A Film Screening and Discussion with Andy van Dam. All are welcome to join us at 7:30pm on Monday, April 25, 2016 in the auditorium at 0320 Tawes Hall (located on the UMD campus) to watch the film and listen to commentary provided by Professor van Dam himself.

The film will be followed up by a panel discussion with Professor van Dam, Ben Shneiderman (UMD Department of Computer Science), Kari Kraus (UMD iSchool and English Department), and Brett Bobley and Ann Sneesby-Koch (both from the NEH Office of Digital Humanities). MITH’s Associate Director, Matthew Kirschenbaum, will moderate the panel.

On Tuesday, April 26, Professor van Dam will deliver Five Decades of Experiments with Hypermedia Systems for the Humanities as part of MITH’s Spring 2016 Digital Dialogues series. The presentation is free and open to the public. MITH also provides live-streaming and podcasts of the Digital Dialogues events, if you are unable to attend in person.

Many, many thanks to Matt Kirschenbaum, Stephanie Sapienza, and the entire team at MITH for hosting these terrific events. We hope to see you there!