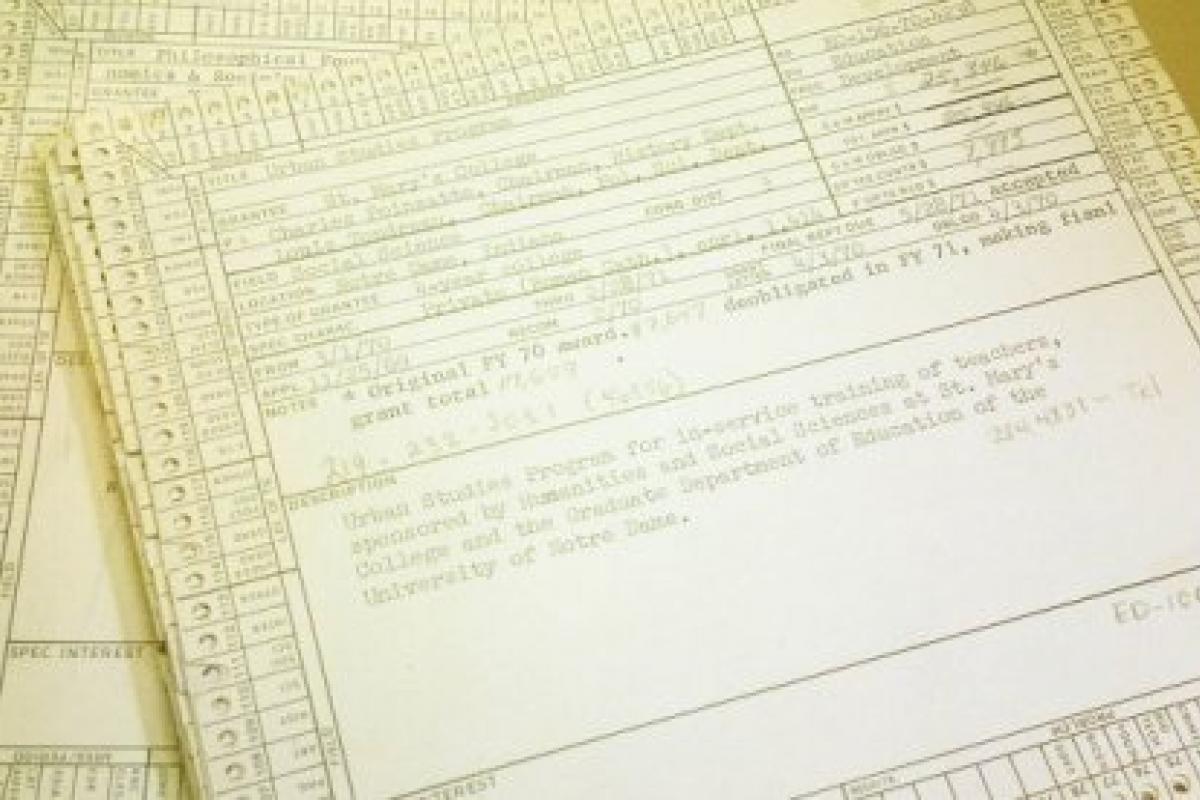 Before the “digital revolution” and “desktop computing” and the “internet,” there were McBee KeySort cards.

The McBee KeySort card is a file card of any convenient size with all four edges punched with a single or a double row of holes, each hole 1/8 of an inch in diameter, four holes to the inch.  One corner of the card is cut off to make it apparent, before the sorting operation is begun, if any card has been inverted…The data to be coded are entered by punching into the card from the outside edge, to form a slot where the hole was before.  A special punch costing about three dollars is available for slotting the card, but the task can be performed with a pair of scissors, though less quickly (Anderson 1953, 340).

The McBee KeySort cards pictured above, and a whole filing cabinet besides, served as a proto-database for the purpose of documenting the earliest NEH grants until 1980, when the agency switched to a computer-based grant management system.  While decidedly outmoded—teetering on quaint—the McBee KeyCard system wasn’t terribly unlike some of the whiz-bang systems we use now.  Like many internet search engines or database, the McBee system used keywords to find and bring back information.  Although searching by keyword using McBee cards was strictly limited to the predetermined and use-specific data “slotted” on the card, the cards could be searched and sorted by inserting the sorting needle or needles through holes in a stack of aligned cards.  Then by lifting the needle(s), all the cards which hadn’t been notched for a particular term or combination of terms stayed on the needle, and—voila!--those that match the keyword combination dropped out.

The number of cards which can be sorted with one operation is theoretically limited only by the length of the sorter…the amount of data that can be sorted can be increased by a number of sorting needles operating simultaneously.  The McBee company manufactures a manually operated sorter, briefcase size, which holds a number of needles (Anderson 1953, 340).

The emphasized bit stuck me as a particularly delightful precursory nod to personal computing, a sort of proto-laptop in terms of portability and complexity.  The future is NOW!

The goal of my project, which forthwith I call Digitizing Early Grant Records (or, DEGR, for the acronymically inclined), is to transfer the data from the NEH’s back catalog of McBee cards into our modern Grant Management System (GMS).   Sadly, this involves very little in the way of combined needle searches.  What the project lacks in cutting-edge needle technology, it more than makes up in the virtual treasure hunt that comes from transcribing the project descriptions and abstracts painstakingly typed on each card, as well as ferreting out information about the women and men who served as Project Directors on these early NEH-funded endeavors.

In the months to come, I’ll highlight projects of particular significance or interest or fun.  I’ve only just finished inputting the grants from Fiscal Year 1968 and have started in on the 1969 stack.  Within these granting periods I have discovered a Douglass House Foundation-supported literature, theater, and film program, an ancillary to the Watts Writers Workshop, which was initiated by Budd Schulberg as a creative response to the 1965 Watts Riots.  The formation and artistic output stimulated by the program makes for fascinating social and arts history, the least of which is the fact that Schulberg was the Academy-award winning screenwriter of On the Waterfront.  A 1969 Education Programs grant funded “The Black Man in America Music” project, which was developed and administered by Altona T. Johns, Virginia State College professor of music, who was married to Vernon Johns, and Undine S. Moore, a Julliard graduate and known as the “Dean of Black Women Composers."

Early on, Humanities Computing projects received funding from the NEH, which forged the way for the innovative work that the ODH supports today.  In 1968 “A Comparative Study of Early Cultural-Technological Human Advance” at M.I.T. was awarded a Research grant, as well as MLA’s “Ordered Computer Collation of Unprepared Literary Texts” and the “Musical Computer Research Project” at the University of Pennsylvania.

At the end of the DEGR project, this archive of institutional history will be made public and searchable via the NEH’s “Funded Projects Query Form.”  And so the humble and technologically-surmounted McBee KeySort card takes precedence as the data source feeding this particular project and everything old becomes new again.

Homage to the McBee KeySort card, “One Dead Media”

(*with apologies to Kris Kristofferson)