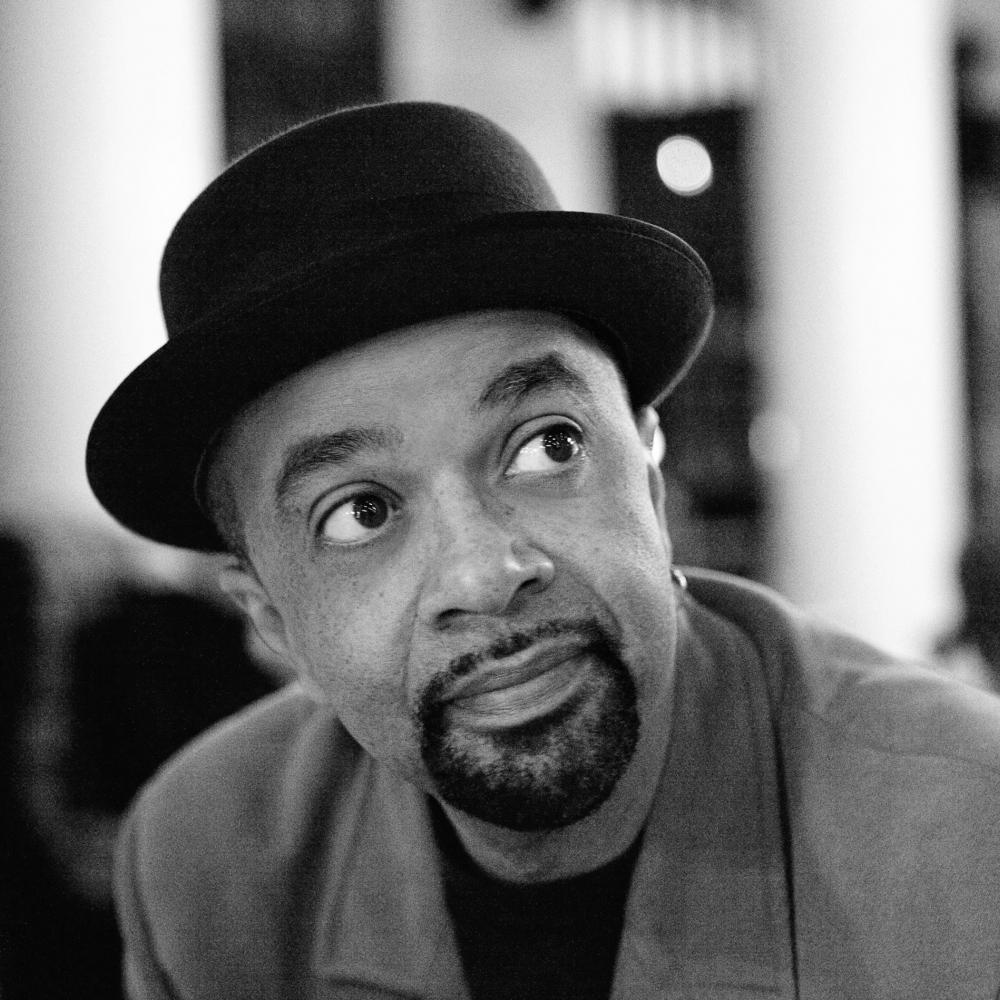 James McBride’s writing career began when he was a first-year student at Oberlin College in Ohio, studying jazz with Wendell Logan, the school’s only jazz expert in those days, and getting a liberal arts education at the same time. His spotty academic record had placed McBride in a course for students who were not quite ready for undergraduate work.

For a writing assignment, he typed up a story about a man who goes to the bathroom, has a heart attack, and dies. “It was a horrible story,” he says, laughing, and then guffawing, at the memory. But there was something to the writing. “You have a touch for this,” Tom Taylor, his teacher, said.

A troubled student in high school, McBride found his way in college as a communications major. “When I went to Oberlin it really changed my perspective on the world. Because I became more socially and politically conscious.”

Today McBride is known as the author of several distinguished books, foremost among them The Color of Water, “an instant classic,” in the words of a New York Times reviewer, that has sold more than 2.5 million copies and been translated into 16 languages. His best-selling novel about four Buffalo Soldiers separated from their unit and hiding in an Italian village during World War II, Miracle at St. Anna, became a movie directed by Spike Lee, for whom he later wrote Red Hook Summer.

McBride is also the author of The Good Lord Bird, a picaresque rendering of John Brown’s raid on Harpers Ferry as witnessed by a man who, in his youth, lived incognito as a girl, an unlikely concoction that won the National Book Award for fiction in 2013. Linguistically inventive, Good Lord Bird draws, with great brio, on colorful vernacular that McBride knew from people in his own life, from slave narratives, from jazz history, and from the linguistic investigations of Lorenzo Dow Turner.

This year McBride published Kill ‘Em and Leave, a book about James Brown that took him into a fever swamp of unreliable sources and the dustup surrounding a contested financial legacy. As much about the music business and the African-American experience as about Brown, the story provides a canvas for McBride’s rich and illuminating investigations.

McBride’s own story has several storylines. From Oberlin he went to Columbia Journalism School. His reporting career began at Wilmington’s News Journal, where he started as an intern before becoming a full-time reporter in the Newark, Delaware, bureau and winning an award for his writing. With his journalistic career shaping up, McBride quit the news business and went to Africa for a few months, seeking his roots in a mash-up of Alex Haley-type-searching and saxophone-playing adventure.

Returning to the United States, he came back to journalism, working for the Boston Globe and then People magazine, covering Michael Jackson’s 1984 Victory Tour nonstop for several months. He also wrote for Us Weekly, Rolling Stone, and the Washington Post. Then he quit journalism again, to work as a full-time musician for about nine years. He played with Little Jimmy Scott, wrote music for Grover Washington Jr., Anita Baker, and Barney the purple dinosaur, but not, he says, the well-known “I Love You” song, though he wishes he had. He also began working on his memoir, The Color of Water: A Black Man’s Tribute to His White Mother.

The chapters alternate between McBride’s memories of growing up poor in a family of 12 children in Brooklyn and Queens and an oral history he took from his mother, Ruth, whose Jewish family came to the United States in the 1920s to escape persecution in Poland. An unhappy child living in segregated Suffolk, Virginia, under the watchful eye of a cruel father, Ruth ran away, married a black man, converted to Christianity, became a widow, married another black man, and became a widow once more. In the struggle to feed her family she left her older children in charge as she worked nights as a typist and in the morning bused her kids all over the city to the best public schools she could find. Amazingly, she found a way to send them all to college.

As a boy, McBride was always curious about his mother’s much paler skin color, the object of many odd looks and some offensive remarks the family endured as they went about in public. Ruth put off his questions, insisting that the only things he needed to worry about were school and church. One day he asked a different question: What color is God? Her answer became the title of his book.

“We have more in common than we are different as human beings,” says McBride. It was something he learned from his mother. “My work always pushes toward the commonality of man or slash woman.”

Academic Prose: Human/Ties Conference Looks at Gap Between the Academy and Popular Culture