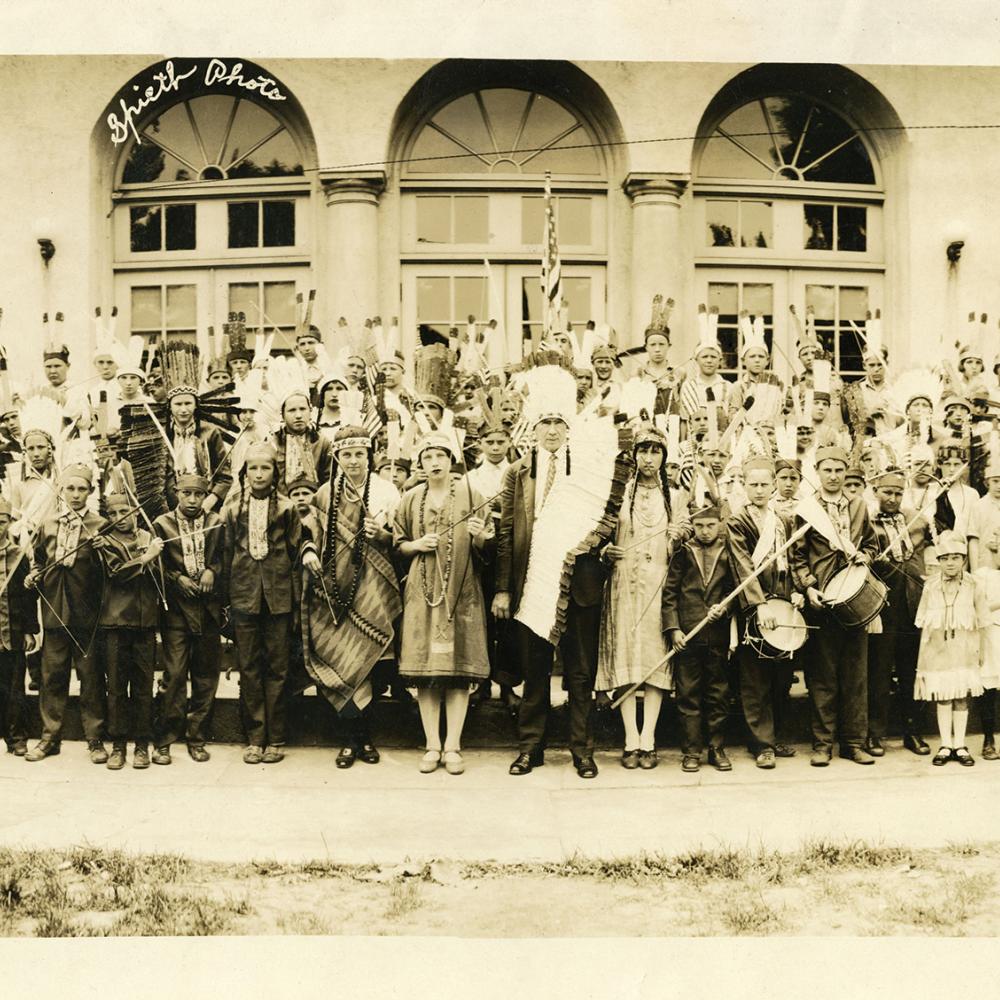 The McCain Library and Archives, the University of Southern Mississippi

More than fifty-two years ago in a small, woodsy southern Mississippi town, a Midwestern woman nicknamed Happy lived in a residence known as the Doll’s House on a stretch of land called Friendship Farm. For anyone meeting her for the first time in those later years of her life, Happy’s invalid condition may have been deceptive.They may not have realized this former newspaper editor and children’s author was an internationally lauded philanthropist. Happy—known as Emilie Blackmore Stapp—helped raise thousands of dollars for European orphans of World War I through her charitable organization, the Go-Hawks Happy Tribe. During World War II, she raised nearly $3 million (approximately $42 million today) in war bonds through the use of her avian literary creation, Isabella the Goose.

“Her work has been lost to time in a sense,” says Daisha Walker, an instructor at the Mississippi Gulf Coast Community College and the lead researcher for the 2013 project of the Friends of the Stone County Libraries funded by the Mississippi Humanities Council.

Walker explains that while many older residents of Wiggins remember Emilie and her sister Marie, their legacy has faded in part because the Stapps’ home, the Doll’s House, was demolished. Fortunately, Happy herself documented much of her community and charitable work. In addition, the sisters’ stories “have come back to the forefront,” Walker says, thanks in part to the oral history project Telling Trees, which “promotes the remembering and honoring of Stone County’s story to the younger generations,” Walker says.

Emilie Stapp was born in Madison, Indiana, in 1876. She later moved to Des Moines, Iowa, where she worked as the literary editor for the Des Moines Capital. In 1908, she published the children’s novel The Trail of the Go-Hawks, which inspired a club called the Go-Hawks Tribe. The popularity of the book and the club enabled Stapp to have her own “Happy Page” in the newspaper, where she could write news of tribe members and their charitable deeds. Both adults and children joined the tribe and membership grew to over 80,000—with members including James Whitcomb Riley and Rudyard Kipling, the “Big Chiefs” for the United States and England, respectively.

Following World War I, children belonging to the Go-Hawks raised funds for children orphaned in Europe by the war. Penny by penny, members collected $38,000—a feat that led to Stapp’s recognition by the king of Belgium and the French government.

Stapp eventually left Iowa for Boston to be an editor at Houghton Mifflin, and then moved to Wiggins in 1925. Here, she continued writing children’s literature and contributing to philanthropic causes. In addition to larger-scale efforts, such as the war-bonds drive, Stapp and her sister donated land and books to help open the area’s first lending library.

The University of Southern Mississippi’s de Grummond Children’s Literature Collection in Hattiesburg houses many of Stapp’s scrapbooks and papers and played an important role in the research conducted by Walker. Ellen Ruffin, curator of the de Grummond collection, finds Stapp’s story and local connection a fascinating tale in the cultural history of Mississippi.

A 1914 pin that came with a poem of encouragement to a new Go-Hawk member.

The McCain Library and Archives, the University of Southern Mississippi

“I would think the idea of a woman’s selling war bonds from a little cottage in Wiggins, Mississippi, and the fact of her selling over $3 million worth of those bonds would interest the community,” Ruffin says. “I also find the marketing Emilie Blackmore Stapp did rivals our contemporary uses of social media.”

Stapp’s literary legacy, however, has a wrinkle. Kay Harris, an associate professor of English at the University of Southern Mississippi working with Stapp’s texts, finds her novels misguided in their stereotyping of Native Americans.

In The Trail of the Go-Hawks, a group of white children pretend they’re a “mighty” and “bloodthirsty tribe” of “warriors.” Their adventures include “raid[s] on unprotected pantries,” cutting girls’ curls, and nearly scalping and burning two dolls. This is before they decide to become “missionaries” and collect donations for a poor African-American boy.

“The importance of [Stapp’s Go-Hawk books] to me is their rather uncritical absorption of and engagement with important social, cultural, and political issues that shaped the early twentieth century, not least of which was the popular and commercial appeal of Indianness,” Harris says. “Even though the Go-Hawks series contains no character that represents American Indians, each of the books is dependent on their existence for constructing its questionable position regarding its recommendation for the practice of benevolence.”

Of course, benevolence has its defenders. Stapp and the Go-Hawk Happy Tribe wanted to “make the world a better place,” according to their motto. Certainly for the town of Wiggins, recovering and remembering Stapp’s work contributes to a better understanding of its history.

Paige Gray is a freelance writer and a doctoral candidate in English, specializing in children's literature