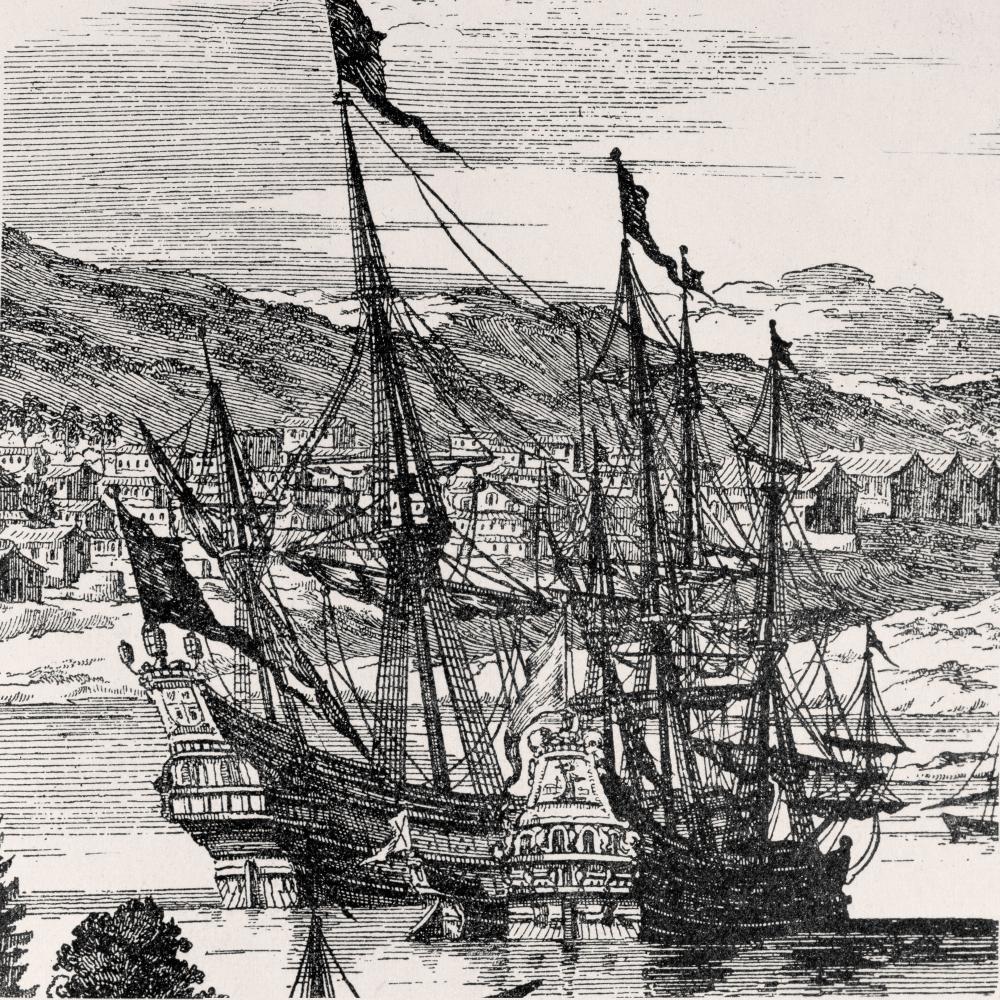 Spanish vessels off the coast of Florida, sixteenth century.

Resting on a shallow sandbar not far from from where the Bayou Texar drains into Pensacola Bay, are two of Florida’s oldest shipwrecks. Archaeologists refer to them, for the site of their discovery, as Emanuel Point 1 and 2. The first is something big—a store ship or galleon measuring eighty to one hundred feet in length. The second is about half that size, its class unknown. Both, the evidence suggests, were part of an eleven-ship fleet commanded by Tristán de Luna y Arellano, a wealthy and well-regarded hidalgo, or member of the Spanish gentry, charged by King Philip II with colonizing the territory then known as La Florida. And both ships, it seems, were forced violently aground on the same night in 1559, victims of a hurricane that, despite the protective cover of the bay, scuttled eight of Luna’s ships and, with them, any chance of his mission’s success.

“There came up from the north a fierce tempest,” the would-be conqueror wrote to his king shortly after the disaster, “which, blowing for twenty-four hours from all directions until the same hour as it began, without stopping but increasing continuously, did irreparable damage to the ships of the fleet.” The expedition lost colonists to the storm and the supplies meant to sustain them while they settled in on the coast. A history compiled years later by a Dominican friar added that the winds (or, rather, its author claimed, the demons behind them) were so powerful that they drove one of the vessels the distance of an arquebus shot—around two hundred yards—inland, where it was found, miraculously, entirely intact, “not a pin missing.”

Of course, today, not a pin of Luna’s supposed miracle ship survives. Instead, archaeologists have only archival records and the worn, worm-eaten rubble at Emanuel Point to satisfy their curiosity. The first site “looks like a mud flat with a pile of rocks,” says Della Scott-Ireton, an underwater archaeologist with the Florida Public Archaeology Network. “It’s dark and it’s muddy—not the kind of place you would want to go fun diving. But, archaeologically, it’s absolutely fascinating.”

Scott-Ireton, who will give a Florida Humanities Council-hosted talk on the wrecks in Sarasota on May 16, was a member of the state survey team that, in 1992, discovered the larger of the two ships (the smaller one, which is still being excavated, was found almost fifteen years later by two University of West Florida students). “I remember that day,” she says. “We ran over something, and the mag”—that is, the magnetometer, essentially, an underwater metal detector—“went off the scale, it defaulted, we’d run over something so big on the bottom.”

The team started diving at the site a few weeks later, doing circle searches and, once they had identified the location of the ship’s stone ballast load, digging carefully through the sediment with induction dredges and hand tools. “There were a lot of ceramics,” she says of their findings, “a lot of storage jars that they would have carried everything from wine to water to foodstuffs in; and the remains of foodstuffs, butchered-cow bones, and pig and chicken bones. On the second ship, they’ve found part of a cat skull—probably the ship’s cat. We’ve also found evidence of ‘stowaways’: black rats and cockroaches. Their pests came along with them,” she laughs.

Spain’s fourth attempt to establish a permanent settlement in Florida—and the only one from which any shipwrecks have been discovered—the Luna project had three goals: convert the natives to Catholicism, create a safe harbor for vessels sailing from New Spain, and, perhaps most important, secure the crown’s latest land acquisition against French incursions. Toward those ends, five hundred and forty soldiers and more than one thousand civilians, women and children among them, brought “all of the materials and equipment that you would need to build a Spanish town at what was then very much the edge of the empire,” says Scott-Ireton. “It was one of the best-funded, best-supplied, best-equipped, best-planned expeditions of the time.”

Prepared as they were, the colonists couldn’t recover from the loss of their ships and supplies. Luna and a dwindling number of survivors struggled on for a year and a half, searching for a reliable source of food inland while getting by on whatever meager provisions the colonial government in New Spain could scrape together and ship. But the project had to be abandoned. Luna left La Florida early in 1561, returning first to Spain, to explain the debacle to Philip, and then to New Spain as the governor of Yucatán, where he died ten years later, a failed, if not wholly discredited, conquistador.

For Scott-Ireton, however, the artifacts at the bottom of Pensacola Bay speak more to the colonists’ hopes for their journey than the catastrophe or petering denouement that, it turned out, actually befell them. “I like to think about what inspires people to pack up everything they have,” she says, “their kids and their dog and their clothes and their cooking utensils, and sail away to a completely unknown part of the world to start their lives again.”