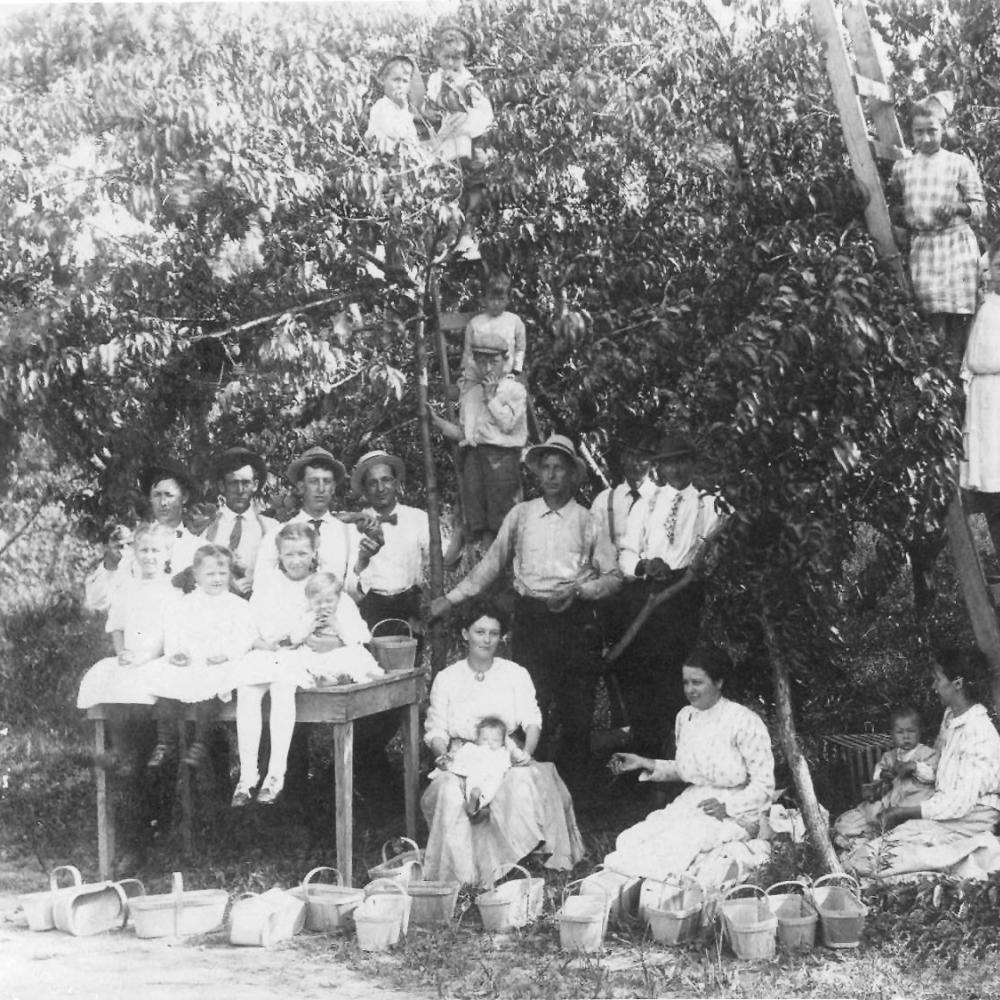 Shawnee was first settled by Belgian and German immigrants, such as the Rieke family pictured here in 1908.

When visitors to the Parsons Public Library get their initial look at the traveling exhibition “Kansans Tell Their Stories” this spring, most will focus on the one panel in nine that captures their own town’s role in Kansas history. That’s only natural: People always look first for themselves in any family portrait.

But exhibition organizers hope that further examination of this collection of oral histories and historic photographs will help exhibit-goers see just how varied the Kansas family is, and how similar their experiences are across the first 150 years of statehood.

The exhibition highlights a handful of the nearly forty oral histories collected since 2004, when the Kansas Humanities Council used NEH funding to develop a project called “Better Together,” which underscored the diversity of the state’s immigrant history by gathering “the stories that hadn’t been told before,” says Julie Mulvihill, executive director of KHC. That morphed into “Kansans Tell Their Stories,” which expanded the focus to include any one-of-a-kind story.

“Kansans Tell Their Stories” visited nine communities last year and will hit seven this year. The core exhibition stays the same from town to town, but the host community creates their own exhibition on local history. “So it becomes, ‘Here are stories from other parts of Kansas, now what is yours?’” Mulvihill says. “The idea is maybe you begin to notice those things that bind us together, that shared human experience.”

The Parsons’ contribution tells what is for many an archetypal Kansas story: small family farmers weathering the Dust Bowl and the Great Depression. The hard-luck tales and gritty black-and-white photographs gathered by the Southeast Kansas Farm History Center ring familiar to anyone with even a passing familiarity with the era. Yet the unique experience of Labette County—where productive farms became a source of strength and sustenance for local towns in the darkest days of the Depression—counters the predominant historical images of breadlines and soup kitchens.

The power of these local stories comes from their juxtaposition with the other oral histories in the exhibition. There are tales of Vietnam-War refugees in Garden City, a historic Mexican barrio in Wichita, and the African-American community in pre-Civil- Rights-era Fort Scott. One panel chronicles the truck-farming origins of a now predominantly suburban section of Johnson County settled by Belgian immigrants in the 1920s, but today is home to a half-million immigrants from Sudan, Somalia, and Kenya.

“You put those two experiences together and it raises some interesting questions about what is the immigrant story, past and present,” Mulvihill says. “When you show various projects together, regardless of boundaries of geography or time or ethnicity or cultural background, you do begin to notice those things that make us unique and those that make us the same.”

Since 2008, the project has included films. Those completed so far include a biopic of Clyde Cessna, who designed the small plane that helped launch the state’s thriving aerospace industry, and Mariachi Estrella: Ad Astra Per Aspera, which portrays one of the nation’s first all-female mariachi bands. A discussion series, FLIKS, screens the films for communities, and most are also posted to YouTube. KHC also opened up the oral history project to encourage Kansans to submit their stories via the council’s website.

“It’s really important that these stories are preserved,” Mulvihill says. “But we also realized that some of these stories that were being preserved also needed to be shared. With the exhibitions, the short films, and the grants, what we’re really trying to do is get the community members together to talk about ideas. The dialog is critical. It’s not about providing programs, it’s about providing an opportunity for discussion.”

During 2011, Kansas will observe its sesquicentennial. Commemorating the last 150 years, Mulvihill notes, is a way of preparing for the next 150 years. The council’s hope is that the “Kansans Tell Their Stories” exhibition and films can add something to the discussion of what it means to be a Kansan over time and across generations.

“The further you get from these stories of our past, the harder it is to recapture them,” Mulvihill says. “We think there is something about this perspective, this lens of the past, that allows us to make more informed decisions in our everyday life and hopefully use these same things to think about what we want to leave for our future.”