Maps and Sketches of Early Virginia 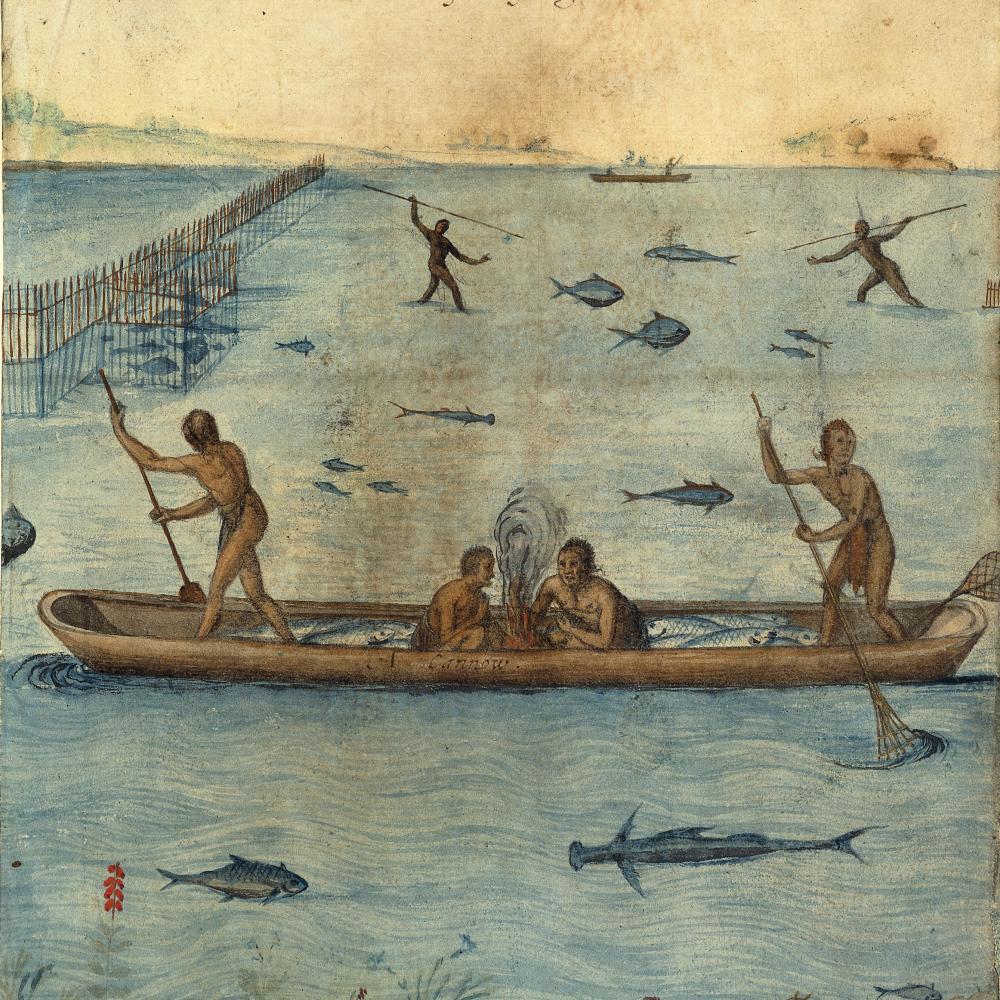 An Indian fishing party sets forth with spears and traps.

There is but one entrance by sea . . . at the mouth of a very goodly bay . . . Within is a country that may have the prerogative over the most pleasant places known, for large and pleasant navigable rivers, heaven and earth never agreed better to frame a place for man's habitation. —Captain John Smith, 1612

In the summer of 1608, Captain John Smith and fourteen fellow Jamestown settlers left the struggling colony to explore the Chesapeake Bay and its tributaries. Aboard a twenty-eight-foot shallop, the crew sailed and rowed more than three thousand miles searching for badly-needed food supplies as well as gold, silver, and the entrance to the fabled Northwest Passage.

Throughout the expedition, Smith mapped the Virginia wilderness, recording lush landscapes, strange wildlife, and encounters with Native peoples, including the great chief Powhatan and his daughter Pocahontas. Smith never found riches or a cross-continental passage, but he left a valuable record of life in America's first permanent settlement. "Along with his writings, Smith's enormously rich and detailed maps are remarkably accurate and influenced exploration and settlement for nearly a century," says Crandall Shifflet.

Four hundred years later, visitors to the Virtual Jamestown Web site at www.virtualjamestown.org can read Smith's firsthand accounts while retracing his expeditions on an interactive map.

Working with the Virginia Center for Digital History at the University of Virginia, Shifflett merged historical documents with electronic technology to develop a Web site that is the cyber equivalent of a rare book room. Using Smith's maps and records as a guide, Shifflett's staff created an interactive Flash map, overlaying the map of Smith's 1608 expeditions with a modern map of Virginia. Visitors to the site can view Smith's daily journeys, learn where seventeenth-century Indian villages once stood, and see the names John Smith gave to waterways and towns.

"It's exciting," say Shifflett, a history professor at Virginia Polytechnic Institute and State University and project director of Virtual Jamestown. "Virtual Jamestown gives anyone with a computer a way to learn about Smith's voyages in a new way—a way of seeing the past that can't be done solely with printed materials."

The Web site follows the digital archive model of providing access to historical documents, but not decoding them, says Shifflett. "Virtual Jamestown does not interpret history. Rather, we created a site that's all about discovery."

A hunter wears fringed deerskin, bluish-black pearls, and markings of various colors for what artist John White calls "Solemne Feasts." White was sent by Sir Walter Raleigh in 1585 to record the Roanoke colony and give Europeans a realistic glimpse of the new world.

For instance, instead of dispelling the myths that surround Pocahontas and her relationship with John Smith and John Rolfe, visitors can read John Rolfe's letter to the governor of Virginia stating why he wanted to marry Pocahontas. "This way, visitors can make up their own minds about why John Rolfe married Pocahontas," says Shifflett.

In addition to maps and firsthand accounts, the site includes census information with names and occupations of the first settlers, the Virginia Company registers, and records of Christ's Hospital, a London school that educated orphans then apprenticed them to captains, merchants, and planters around England's empire. With a click of the mouse, visitors can search databases tracing individuals and the events in their lives.

Another important part of the Jamestown story is the arrival of African slaves in the early seventeenth century. Visitors can study early slavery laws and read newspaper advertisements about runaway slaves and indentured servants. Created in collaboration with the Virginia Runaways Project, the digital database provides full transcriptions and images of runaway ads placed in Virginia newspapers from 1736 through 1790. The database will be expanded to include court records, slaveholder correspondence, and literature about slavery and indentured servitude.

Shifflett says adding these features are important because the Jamestown story is best told through the lives of ordinary people. "We made a strong effort to add all the stories that make up Jamestown. Because we have little information on the Africans and Natives, they are often forgotten. We will continue to add their stories and deliver materials to teachers and the general public."

With its wealth of primary source materials and interactive features, Virtual Jamestown has been used by primary and secondary school teachers. Teachers can browse a comprehensive list of lesson plans for new ways to capture their students' attention and spark interest in Jamestown, and many of the lesson plans are tied to the National History Standards and the Virginia Standards of Learning. Students also can study three-dimensional, rotating views of Jamestown artifacts that have been provided by the Jamestown Rediscovery archaeological project.

"During workshops, teachers tell me that their students really respond to images that move on their computer screens," says Shifflett. "The interactive nature of the site is making history exciting for students by encouraging them to use their natural, detective instincts."

Currently, visitors can take virtual reality tours of James Fort and an Algonquin village. Shifflett hopes to add more interactive features to the site this year. He wants users to be able to click on different points in a map of John Smith's journey and have boxes appear that give historical information about the chosen points, and eventually Shifflet wants to add The Complete Works of Captain John Smith, 1580-1631, compiled and annotated by Philip L. Barbour.

Using records from the Virginia Department of Historic Resources, Virtual Jamestown staffers are constructing a three-dimensional recreation of the Paspahegh Indian village, which was located just eight miles above James Fort. The village, a member of the Powhatan Confederation, is now located under the eighteenth hole of a golf course. "Fortunately, we have artifacts and archaeological drawings that were done in a survey of the area years ago," says Shifflett.

Also planned are three-dimensional recreations of the Jamestown Statehouse and Meetinghouse.

Before Jamestown was settled, the coastal areas around the Chesapeake Bay had been visited by many European explorers hoping to make a claim in the New World. In 1585, Sir Walter Raleigh sent an expedition to the Outer Banks of North Carolina to settle "Virginia." Artist and cartographer John White accompanied the voyage. White's mission was to paint an accurate picture of the New World for his sponsors back in England. Although the earlier venture to settle Virginia failed, White returned to England with more than seventy illustrations of indigenous people, plants, and wildlife he made during his thirteen-month stay.

Despite their significance, the watercolors were not published until 1964 by the University of North Carolina Press. "Here are these images that provide access to the earliest, and what many say, are the most authentic representations of these early 'Americans' and they were not published since White produced them in 1585," says Shifflett.

"Because they are the same language group and similar to the Indian groups around the Chesapeake, this is the closest we will ever get to real images of Indians, landscapes, plants, and animals at the time of the Jamestown voyage."

Under a licensing agreement with the British Museum, Virtual Jamestown has made a selection of White's watercolors available for the first time on the Internet.

Astronomer and mathematician Thomas Hariot was a member of the 1585 voyage. When Hariot returned to England, he wrote an account of his journey, A Briefe and True Report of the New Found Land of Virginia. It is one of the earliest known surveys of the New World. Visitors to Virtual Jamestown can view Hariot's report along with other pre-Jamestown documents.

In 1590, engraver Theodor de Bry made copperplate engravings from White's drawings to be printed in Hariot's report. In his engravings, de Bry embellished White's images for his English audience. "The faces are more Europeanized and some engravings have a completely different look than the original images. So we have these views of early Americans through two sets of English eyes, with different purposes in mind," says Shifflett.

To show the contrast, Shifflett has placed the White and de Bry images side by side on the Web site so visitors can compare the original work with the engraving. Additionally, linked to the images are the detailed annotations by Paul Hulton and David Beers Quinn from The American Drawings of John White 1577-1590, courtesy of the University of North Carolina Press.

Shifflett says that the Virtual Jamestown has combined history, archaeology, and technology in a way that provides new ways of learning. In addition, the project has opened doors to collaboration with other scholarly institutions. "We will continue to be an inclusive site. After all, diversity is what Jamestown is all about."