The Sage of Baltimore Reporting from the Hustings 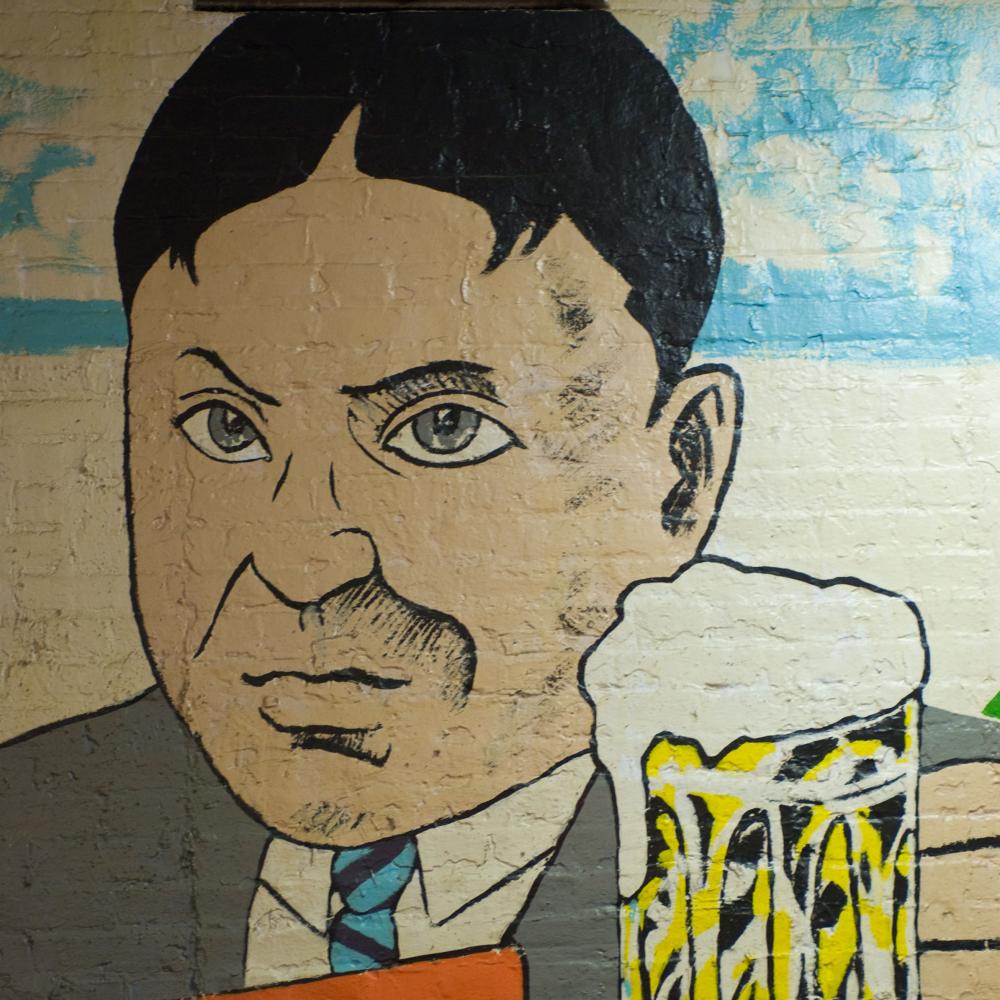 The shouty, smoky, flesh-pressing atmosphere of an old-fashioned political convention was like a day at the beach for this confirmed newspaperman.

On June 20, 1948, a round and no doubt rumpled correspondent for the Baltimore Sun looked into the galleries of a Philadelphia convention hall and spotted the future.

His name was Henry Louis Mencken, and he didn’t like what he saw. It was the day before the Republican National Convention, and in a rehearsal of the proceedings technicians had turned on huge lights to accommodate television, a new presence at political conventions. In the dramatically increased glare, Mencken  could see what these quadrennial political gatherings would become, and what they’ll be this summer, as another season of political conventions arrives in America: a pageant of images, in which what candidates say or do is perhaps less memorable than how they look.

“It passed off well enough, all things considered, and no one was actually fried to death,” Mencken said of the high-wattage illumination introduced that year in Philadelphia. “But I doubt if any politician, however leathery his hide, survives that unprecedented glare of light without a considerable singeing.”

Mencken was, perhaps, mourning something else: the diminishing influence of print reporters in a political culture that would increasingly be dominated by pictures rather than words. He had, after all, evolved as the rollicking poet laureate of political conventions since covering the GOP presidential nomination of Theodore Roosevelt in 1904, emerging as arguably the first American writer to cultivate convention coverage into a form of literature.

Truth be told, Mencken’s fledgling dispatches from TR’s political coronation in Chicago weren’t that memorable. As Mencken biographer Marion Elizabeth Rodgers points out, he was only 24 back then, and his legendary prose style had yet to develop. But develop it did—so much so that 60 years after his passing, Mencken’s convention commentaries are still read and enjoyed in the anthologies A Carnival of Buncombe and The Impossible H. L. Mencken.

Mencken (1880–1956) was many things. In addition to his political reportage, he launched the American Mercury magazine, tirelessly advanced a great flowering of American letters in the 1920s, coined the term “Bible Belt" to describe the religiously conservative South, and authored The American Language, a mammoth philological study. Despite his vast national influence and varied career, Mencken remained, at heart, a hometown newspaper man, filing acerbic columns for the Sun papers in his native Baltimore.

And for Mencken there was nothing more fun than covering a political convention. After his 1904 debut, “a convention was to him the arrival of a circus to a country lad,” recalled his friend and colleague, Alistair Cooke. “Once every four years, he went to work on them with his self-confessed ‘impartiality,’ which is to say the Hippocratical zeal of a surgeon who picks the same scalpel to excise the appendix of a Boy Scout or a dope peddler.”

Although he was a legend by the time he covered the 1948 conventions, Mencken seemed happiest hanging out with the lowliest of the ink-stained wretches. “He never condescended to anyone, certainly not to professional newspapermen,” noted Cooke, who attended the gatherings with Mencken. “He sat simply as an old reporter among equals.” His wardrobe, Cooke mentioned, was often just as unpretentious. “On ceremonial occasions,” Cooke wrote, “he dressed like a plumber got up for church.”

Sitting next to Mencken in the press gallery, Cooke got a close look at the Sage of Baltimore’s work habits: “He typed out his stuff in triple space, on a ribbon that might well have been installed at the 1904 convention. But however faint and grey was the typescript, the sharp prose was no one’s but his.”

Mencken had also done stints as a theater reviewer, and he brought that sensibility to his convention coverage. Even before the TV cameras arrived, he was keen to the idea of conventions as carefully staged dramas, if not inadvertent comedies. The 1920 Democratic convention in San Francisco was his favorite, prompting praise that would sound right at home if lavished on a Broadway production:

The hall itself is small, but very well arranged and even beautiful. Behind the speaker’s platform is a large pipe organ and to either side of it there is a gallery, one for the band and the other for a choir. Overhead hangs a gigantic canopy, so huge that it conceals the whole roof. The seats are roomy. The attendants are polite. Outside, in the convention building, there is a clean lunchroom. The acoustics are perfect.

Although he loved the gaudy pageantry of political conventions, Mencken was wary of what they produced, as in this 1924 lament:

The convention system, at bottom, is certainly not a bad one. It gives the people of all parts of the country their chance to be heard; it provides for free debate; it insures voting in the open; it is fundamentally fair and honest. But in practice it has become so horribly enmeshed in formulae that two-thirds of the ends that it was designed to achieve are defeated. The delegates spend nearly all their time and energies not in considering the business before them but at the hollow maneuvers of trained animals.

Like anyone who watches conventions, Mencken craved surprise—a commodity that, then as now, was in short supply. In 1924 the Republican nomination of “Silent Cal” Coolidge, a man not known for charisma, was inevitable, prompting Mencken to yawn:

[T]he man who could be a Coolidge fanatic could also be a fanatic for double-entry bookkeeping. Even the sworn friends of the President … carry on their business with the air of grocery clerks wrapping up packages of ginger snaps. As for the common run of delegates, they are simply standing in line waiting. A whoop for Coolidge would be almost as startling as a whoop for parallel longitude.

An equal-opportunity critic, Mencken could be just as hard on Democratic candidates. During the 1932 convention season, he had this to say about Franklin Delano Roosevelt, who had rebounded from polio to become one of the most influential political figures of the twentieth century. Although FDR loomed like a lion that year, Mencken managed to draw him in human scale:

Governor Roosevelt begins to look a little tired. The whispering about his legs, of course, has come to nothing; he gets about on them very nimbly, and it will be many a day before they give out. But even a centipede would be somewhat frazzled by what he has been through during the past two months. … He has been bombarded by bands and rowelled by handshakers. All the worst bores in America have had free access to him. He has breathed and eaten tons of train dust. … So it is no wonder that his eyes look a bit fishy, that his forehead has some new wrinkles, and that there is a shade more grey in his hair than there was last July. His scalp, in fact, begins to show through plainly, like a photograph coming up in the developer. By 1936 he will be bald.

Mencken loved political conventions, but he didn’t take them too seriously. He had a low opinion of the intelligence of the average voter, which made him skeptical of democracy.  During convention season in 1920, the prospect of a president who truly reflected the electorate chilled him:

As democracy is perfected, the office represents, more and more closely, the inner soul of the people. We move toward a lofty ideal. On some great and glorious day the plain folks of the land will reach their heart’s desire at last, and the White House will be adorned by a downright moron.

Readers can wrangle about whether Mencken’s prophecy has—or will—come true, and that’s the great thing about him. His observations, coined decades ago, can still seem as fresh as the morning headlines. Generations after he left the popular scene, Mencken continues to spark arguments.

The 1948 convention season was the last one that he would write about. Mencken suffered a debilitating stroke later that year that sidelined him until his death in 1956. He remains one of America’s most memorable writers about politics, but he never ran for office himself. “I am strongly in favor of common sense, common honesty, and common decency,” he said. “This makes me forever ineligible to any public office of trust or profit in the Republic.”

NEH has provided support to Marion Elizabeth Rodgers to edit Mencken: The Days Trilogy, Expanded Edition, which was published by Library of America. Rodgers also has received two NEH grants, totaling $29,155, to work on Mencken: The American Iconoclast. The Smart Set, which was coedited by Mencken and George Jean Nathan, is being digitally archived by the Modernist Journals Project with NEH support.