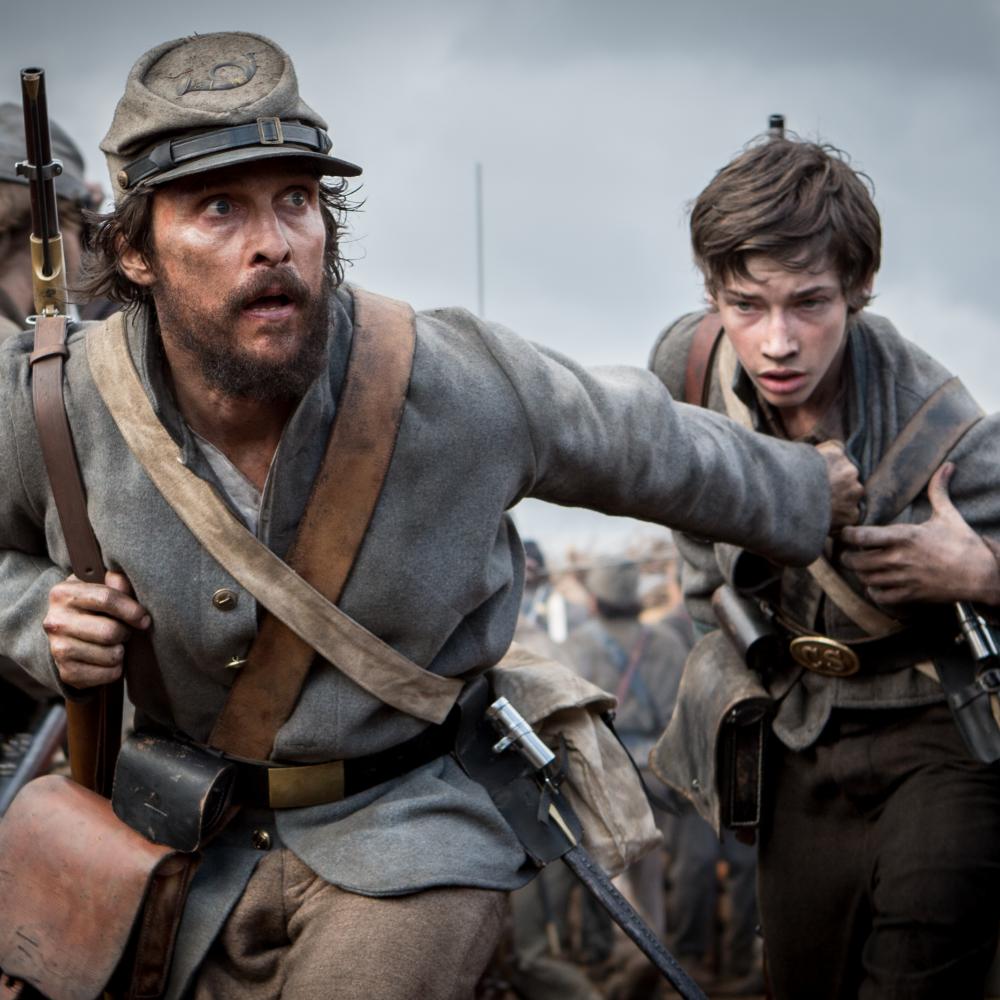 The movie starts with a bang—and with a battle.

The time is October 1862; the place, Corinth, Mississippi. Row upon row of marching Confederate soldiers—their expressions weary, their beards scraggly—approach a line of Union soldiers. Bullets spray and bodies fall. An army medic helps a fallen soldier to a tent to receive care. A sympathetic-looking nurse stands over an amputee while reading verses from the Bible.

In time, the medic—a farmer who resides in Jones County, Mississippi—decides that he no longer wishes to fight a “rich man’s war.” Not an owner of slaves himself, he forsakes the Confederate army and is made the leader of a group of more than one hundred deserters, who battle back the Confederacy in Jones County.

These images are from the movie Free State of Jones, which opened in theaters the weekend of June 24. The medic and later captain of the deserters is Newton Knight, played by Matthew McConaughey.

And that sympathetic-looking nurse? She is Victoria E. Bynum, Distinguished Professor Emeritus of History at Texas State University in San Marcos, whose 2001 book published by the University of North Carolina Press, The Free State of Jones: Mississippi’s Longest Civil War, helped inspire the movie.

Writer-director Gary Ross—whose previous films include Pleasantville (1998) and Seabiscuit (2003)—saw the story as an opportunity to present core truths about the Civil War. One thing that bothered him in other Civil War films was the tendency to sanitize the event. “It was almost like a chess game between white guys,” Ross says. “It was about the battles of Lee and Grant,” but divorced from the broader themes of “freedom and race and class.”

For three days in March 2015, Bynum and her husband were visitors to the Covington, Louisiana, set of Free State of Jones, which is when she filmed her cameo appearance. “My husband is in there, too, but his scene got cut,” says Bynum, whose book on this curious historical episode was supported by an NEH research fellowship. “We loved watching the takes; we loved watching Matthew McConaughey. And, of course, we loved being in it, even though it was exhausting to be out on a set.”

When Bynum first dove into the history of Newton Knight (1837–1922) and the anti-Confederate movement in Jones County, however, movie sets and the stars who inhabit them were far from her mind. As an undergraduate at California State University–Chico, she stumbled upon a fleeting reference in a textbook to a pro-Union faction of fighters in Jones County—of which Bynum’s father was a native. “I noticed a footnote, and it said that Jones County, Mississippi, was famous for the legend that it had seceded from the Confederacy,” Bynum says. “It just stuck in my mind because my dad was from there: Oh, that’s interesting and kind of bizarre.”

After finishing a dissertation on women in the antebellum South, Bynum set out to learn more. “It’s a story that I was drawn to because of my interest now in the Civil War home front,” she says, “and because I had a family connection to it.” Her work proceeded in fits and starts. In order to conduct research at the Mississippi Department of Archives and History in Jackson, the National Archives in Washington, D.C., as well as at institutions in Alabama, Georgia, and Texas, Bynum took advantage of a pair of one-semester developmental leaves, seven years apart, and three summer research grants. “I would go and do my research in the summer,” she says, “then I would come back and teach generally three classes a semester for two semesters, and try to squeeze in as much writing as I could.”

Knight had willingly signed up for the Confederate army, but an aversion to slavery was present in his family going back a generation. “Even though his grandfather was one of the wealthiest slaveholders in the county, his father chose not to own slaves,” Bynum says. “Newt carries that on; he never owns slaves.” After the Battle of Corinth and the adoption of a law that permitted members of families who owned a minimum of 20 slaves to duck military service, Knight was at a crossroads.

“He always attributed his decision to desert, in part at least, to Jasper Collins, who said that passage of the Twenty Negro Law made this a rich man’s war and a poor man’s fight,” Bynum says, referring to a fellow deserter. “Newt Knight, in a 1921 interview, quoted Jasper Collins as saying that to him, and said, ‘And I pretty much decided that Jasper was right, and I deserted.’”

Knight deserted the Confederate army, but his skill as a soldier did not desert him. “He just simply took it to the other side,” Bynum says. “He took it to the woods, he formed a military band, and he was quickly elected the captain of that band by the men.” For approximately two months in 1864, Bynum says, the Knight company “had taken over Ellisville,” a city in Jones County. Subsequent Confederate raids diminished the company, but Knight and his closest allies kept on fighting.

Bynum had intended to write a book focusing on this episode, but the story was bigger than she had realized. “It was on my first trip to Mississippi,” Bynum recalls, “that I discovered that Newt Knight had entered into an interracial relationship with a former slave of his grandfather’s, and that she had been his accomplice—the accomplice of the whole deserter band during the war—and that after the war, she and her children had gone on to live with him and that she and Newt Knight had had children together, too.” Knight’s marriage to Serena—a white woman with whom he had nine children—remained intact; five children are thought to have been born to Knight and Rachel, the former slave.

Discovering an organized rebellion within a rebellion was interesting on its own. Add to this the surprise of finding a polygamous, interracial, abolitionist, freedom-fighting clan at the heart of it all.

“He openly lived with Rachel and with his white wife,” Bynum says. “He saw to it that Rachel and all of the children inherited property, he never denied them publicly, and I think that tells us a lot about Newt Knight, too.”

As the book approached the finish line, Bynum received her NEH fellowship. It gave her another year that she could devote entirely to The Free State of Jones. “I rewrote every single chapter,” she says, “revised them, changed things around, and wrote an entirely new chapter.” And four years after the book was published, Hollywood came calling.

In the afterword to a movie tie-in edition of book, Bynum writes that “the image of a movie did briefly flash before my eyes.” What she had in mind, she says today, was a multipart documentary, perhaps akin to Ken Burns’s The Civil War. “Only, let’s do it about Southern Unionists and let’s focus on Free State of Jones and maybe some of the other communities,” she says. “I honestly didn’t picture it being Hollywood.”

To her surprise, however, producers T. G. Herrington and Bruce J. Nachbar optioned The Free State of Jones in 2005, with the intention to make a feature film based on the book. “I still remember the first communication I got from the contracts manager there, Victoria Wells,” Bynum says. “She said, ‘You know, most options, they just come and go. . . . But I really have a different feeling about this one.’” The following year, writer-director Ross—who had already purchased a treatment concerning Newton Knight from writer Leonard Hartman—got involved. (Hartman receives a story credit with Ross in the finished film.)

In the end, the film Free State of Jones was not based on the book The Free State of Jones, but the book was used as a major resource, with Bynum credited as a consultant. For a period, however, it seemed that Ross’s research—which involved reading 40 to 50 books, he says—would not result in a film. The project stalled as the 2000s drew to a close and Ross worked on other projects.

“I’d seen indications that even though Gary Ross was off doing Hunger Games [2012], that he wasn’t going to do the sequel because he had another pet project he wanted to pursue,” Bynum says. “And I thought, 'Could it be?’ That’s exactly what it was.” Universal Pictures was the original studio; STX Entertainment eventually made the movie.

For a history professor, the journey from academic publication to Hollywood dealmaking was surprising. “It was a big shock,” Bynum says, “and I think it was a shock for the press, too.” The author confesses that she was not even a devoted moviegoer. As a young person, Bynum was disheartened to learn that the 1971 film Mary Queen of Scots would feature the titular character interacting with Elizabeth I—even though, as she notes, “they never had met in real life.” At that point, she says, “It was over for me. I didn’t want to see it.”

As Free State of Jones made its way to the big screen, Bynum says she became less concerned with whether or not the film—or any film on a historical subject—adhered to the absolute facts or the precise narrative. “When I previewed the movie, what I was satisfied with was that it is a true story of an insurrection that really did happen,” she says, while other events depicted in the film “might have happened.” She adds: “Some of it is probable; some of it might be just possible.” As an example of “the probable,” Bynum offers the Knight Company’s encounters with escaped slaves, which make for some of the film’s most powerful scenes.

Examining history and making movies are profoundly different tasks, but, as Bynum sees it, “if that moviemaker can still come out with the larger truth intact, and I think he’s done that, then we’ve really got a real synergistic project here between historians and moviemakers.”

Victoria E. Bynum received a research fellowship in 2000 to support her research on the Civil War in Mississippi and the Free State of Jones. John Stauffer received a summer stipend in 1999 for research that led to his 2002 book The Black Hearts of Men: Radical Abolitionists and the Transformation of Race. In 1983, Eric Foner of Columbia University received a research fellowship to support work on his classic study of the postwar period, Reconstruction: America’s Unfinished Revolution, 1863-1877. Foner was yet another scholar consulted by Gary Ross in the development of Free State of Jones.