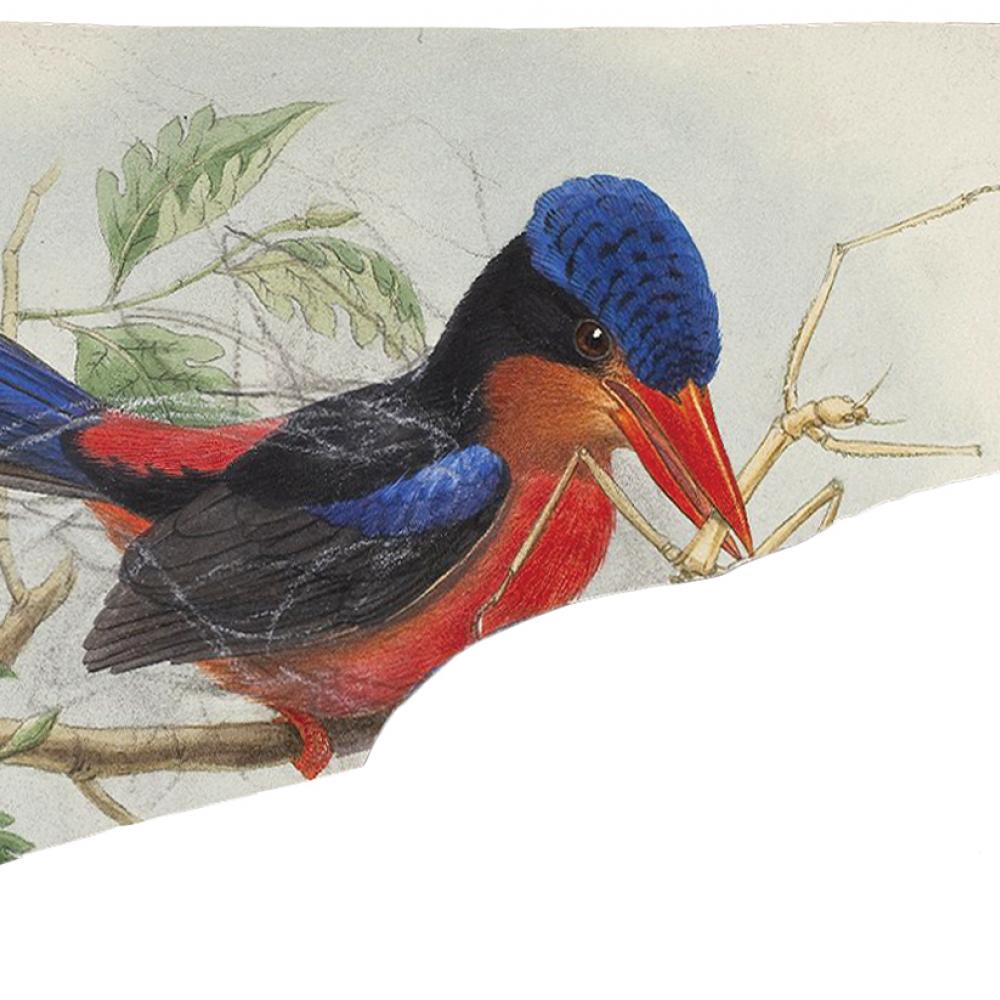 Bird artist John Gould captured the essence of his avian subjects with quick, bold lines, but his great success was due to more than a good drawing hand. Just as important was his manner of production, which yielded an incredible fifty oversized volumes between 1830 and 1881. First, Gould would make a rough sketch, jotting notes on the manuscript as to how to fill out the picture and which colors to add, then pass the image on to other artists and colorists, including his wife, Elizabeth, and Edward Lear, who provided the finishing touches. His beautiful drawings assured his popularity among a wealthy clientele, while the reliable scientific information in his tomes made for a wider commercial success.

Born in Dorset in 1804, Gould became adept as a child at egg-blowing and taxidermy. He would collect natural specimens and bird eggs and sell the treasures to boys at Eton. By the time he was twenty, Gould was capitalizing on the booming trade and interest in taxidermy, which soon led to an appointment as curator and preserver to the Zoological Society of London’s museum. The job came with a salary of one hundred pounds, a hefty income for a young man at the time.

In 1829, Gould married Elizabeth Coxen, a well-bred governess. She had a solid grounding in music, art, and languages. As the Goulds began raising a family, Elizabeth helped her husband with drawings of birds.

The first work Gould and Elizabeth collaborated on was the massive A Century of Birds fromthe Himalaya Mountains, which was issued in parts between 1830 and 1833. Gould’s albums were in imperial folio format (22 inches by 15 inches). The couple’s diligent toil was also a learning experience, one in which Elizabeth acquired, through Lear, the techniques needed for drawing birds on stone printing plates. The Goulds voyaged to Australia from 1838 to 1840 and worked on their last joint book, The Birds of Australia. The next year, Elizabeth died of puerperal fever following childbirth, leaving six children.

The Victorians’ appetite for books and for collecting specimens from the natural world fed the frenetic activity in what has been called the Gould factory. More than an artist, Gould was a consummate entrepreneur.

But Gould was a man of his age as well. By the end of the hummingbird craze, which started in England in 1851 at the Crystal Palace in London during the Great Exhibition, he had well over five thousand hummingbird skins in his personal collection. It’s no wonder the bird-loving English were enchanted: The country had no native hummingbirds. Gould wrote about them with admiration after having seen some for the first time in America: “With what delight did I examine its tiny body and feast my eyes on its glittering plumage.”

Gould made solid contributions to science as well. He helped identify species in the collection of four hundred fifty birds that Charles Darwin presented to the museum of the Zoological Society in 1837. This identification played a significant role in developing the theory of evolution. With Gould’s help, Darwin was able to demonstrate that species of birds on the Galápagos Islands were similar to those specimens collected in South America, which led to the concept of divergent evolution, whereby isolated populations can become new species. In addition to aiding Darwin, Gould wrote more than three hundred scientific articles.

A digitization project at the University of Kansas has been making the Gould collection available online. The unlikely series of coincidences that led to Gould’s manuscripts winding up in Lawrence, Kansas, has the makings of a poignant yet cautionary modern fairy tale.

A young, sickly boy born in 1908 to a wealthy Long Island family became fascinated with natural history, and by age twelve he was collecting birds’ eggs and nests. He moved with his mother to Berkeley, California, in the early 1920s, and there some zoologists guided him in his interests on field trips. After another bout of illness ended his fieldwork, he nurtured, as an adult, an obsessive desire to collect books on birds. According to special collections librarian Karen Cook, the man, Ralph Nicholson Ellis Jr., already in financial straits due to his furious pace of book buying, traveled to England when he heard that the Gould collection was up for sale. There, in 1936 and 1937, he racked up bills for books he bought from the collection to the tune of $63,000. InA GentleMadness, Nicholas Basbanes describes Ellis’s collecting as a case of “galloping bibliomania,” which by 1940 had gotten so out of hand his mother had him committed briefly to a sanitarium lest his purchases wipe out the family fortune.

Some inheritance money allowed Ellis to buy even more books he could ill afford. While moving cross country from California in 1945, the 65,000-item collection made the trip in two railway freight cars. Ellis, who was in New York awaiting the collection, diverted it to Kansas when a friend, the head of the Museum of Natural History in Lawrence, offered him storage space, an office, and the opportunity to catalog his collection. Ellis recognized this as a chance for a new start and accepted but died six months later of pneumonia. To the University of Kansas, he bequeathed the collection, which after some years found its permanent roost in the Kenneth Spencer Research Library.

In 2011, the University of Kansas received an NEH grant totaling $71,000 to catalog and digitize more than six thousand of Gould’s drawings, watercolors, lithographic proofs, color trials, and published prints, which will be made available online.