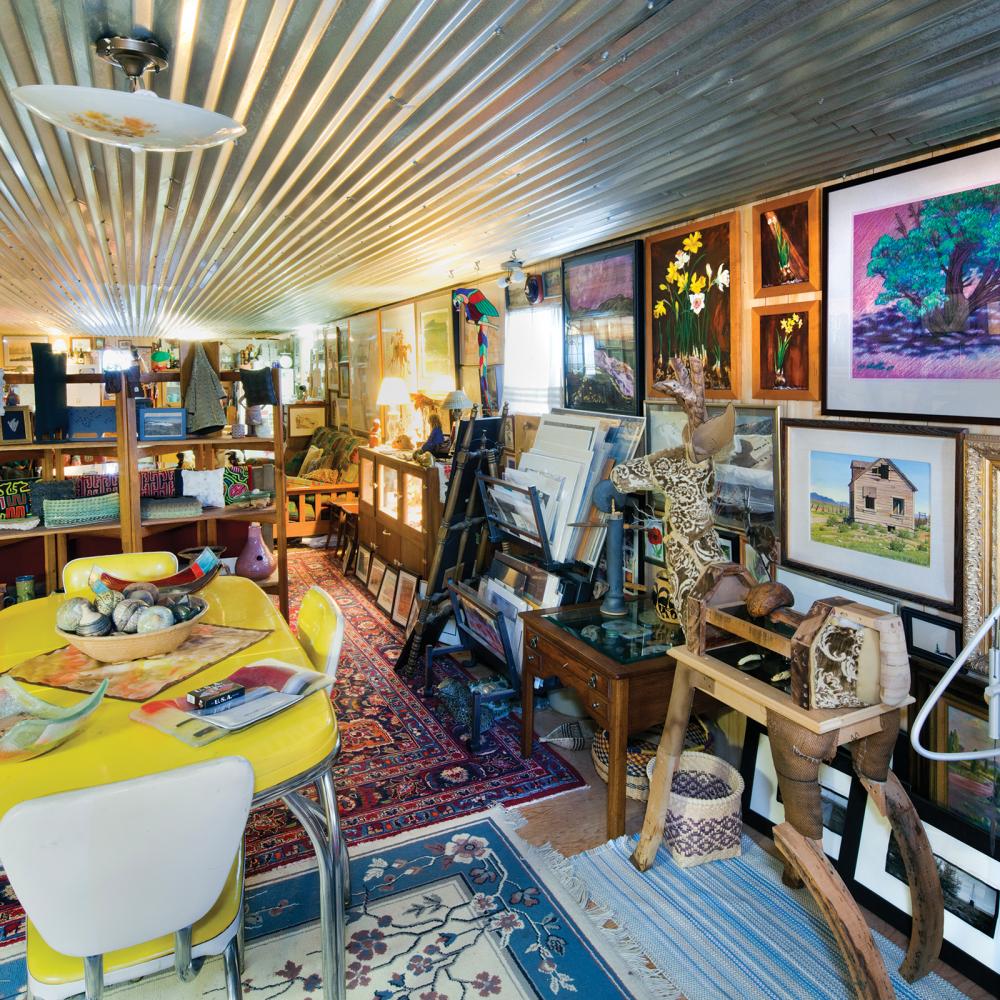 They call it “the loneliest road in America.” Stretching east to west across the brutal, Nevada desert, Highway 50 is a route to be traveled with care. It’s also the path to one of the most unusual and noteworthy art collections in the Silver State.

About halfway between the California and Utah borders, in the remote town of Eureka, lives Wally Cuchine, a jovial sixty-six-year-old who openly admits that he “loves publicity.” And why not? As the former director of the Eureka Opera House, Cuchine helped his tiny city (the seat of a county known for ghost towns) become a cultural attraction. He also amassed a private art collection containing approximately two thousand pieces.

A true count isn’t available, as Cuchine hasn’t finished cataloging his works, which he displays in two mobile homes. One of the trailers, with art hanging in every available inch, is his main residence. The other has been gutted and turned into a gallery, but there’s still not enough space.

“I added sixty pieces to the collection last year, but it’s got to come to a stop because I don’t have any room,” Cuchine says. “It’s my addiction.”

Jim McCormick, professor emeritus in the art department at the University of Nevada, Reno, has known Cuchine for decades, and he agrees with his friend’s diagnosis.

“It’s clearly an addiction,” McCormick says. “But you know what? Nobody gets hurt.”

Cuchine is generous with his collection, and an exhibit featuring thirty-five pieces is traveling around his state through 2015. “Wally’s World: The Loneliest Art Collection in Nevada” is funded in part by Nevada Humanities and organized by the Nevada Arts Council. As part of the Nevada Touring Initiative to bring arts to isolated communities, it will be seen in tiny towns, including Austin and Ely, as well as the more cosmopolitan Reno.

Narrowing a two-thousand-work collection to less than forty pieces was difficult, Cuchine says, but he started with a short list. Then he collaborated with McCormick, the exhibit’s curator.

The works include a large 1960s watercolor of a wild mustang by Craig Sheppard. There’s also a 2004 Ron Arthaud oil painting of a Eureka street and a 1993 pastel of Pyramid Lake by Jack Malotte. Cuchine says his goal was to create “a reasonable representation of the entire collection.”

McCormick says they were also shooting for a variety of media that could offer a historical perspective on Nevada art. That means everything from a 1940 James Lawrence lithograph depicting a Washoe Valley landscape to a quirky 2010 ceramic chicken by Wally Wallace. Collectively, the pieces give viewers a taste of life in Nevada, particularly the state’s remote areas.

Cuchine says he started collecting in the late 1960s, and he got serious in 1983. In the early years, he bought mostly modest pieces, but his taste and expenditures increased as his collection grew. Cuchine says that, before his retirement, he spent as much as half of his salary on art. In fact, he would regularly deal directly with artists, making purchases on installment plans.

“I’d see a piece that I wanted that was a couple of thousand bucks,” he says. “I’d pay for it at a hundred bucks a month, and I was making as much as $800 a month in payments.”

Cuchine is pleased that his collection is making the rounds in Nevada, and he says his next big job is making sure all the records are properly archived. Although he’s got a lot of work in front of him, he says he enjoys the process because it reconnects him with every piece.

One of the unusual things about Cuchine’s collection is that many pieces were created by rural artists that few people know. “Nobody ever collected all those people,” McCormick says. “It’s a picture of a particular point in time and a particular geography.”

Forrest Hartman is an arts and entertainment journalist and teaches journalism at California State University, Chico.

From the imagination of a business-savvy Polish rabbi