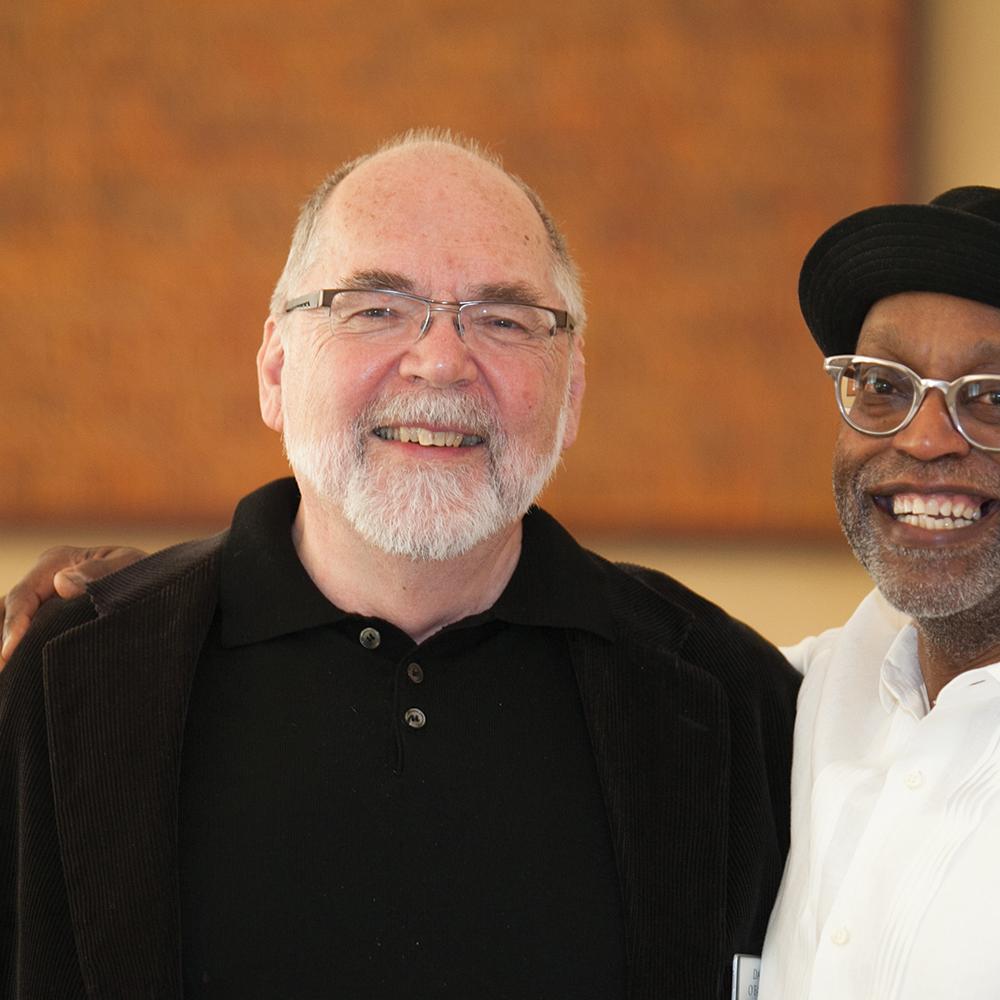 David O’Fallon, left, and artist Seitu Jones at "An Evening with Seitu Jones," an event sponsored last year by the Minnesota Humanities Center.

Growing up in Litchfield, Minnesota, three broad notions defined David O’Fallon’s outlook: a belief in education; a sense that the arts and humanities could be agents of change; and an understanding of the power of community.

“I never had a plan, but I had those three themes,” O’Fallon said recently—many decades older, wiser, and still committed to those principles as president of the Minnesota Humanities Center. His life path has taken him from theater in the streets of Minneapolis to the National Endowment for the Arts to Minnesota institutions of education and the arts.

“David has a crystal clear understanding that community participation in the arts and humanities is essential to civilization, and he can articulate that better than anyone I have ever known,” said Hazen Graves, a Minneapolis attorney who was board chairman at MacPhail Center for Music when O’Fallon was president there from 2002 to 2009.

O’Fallon, who has a PhD in theater and community, was on staff at the University of Minnesota in 1973 when he founded Powderhorn Puppet Theatre in a section of south Minneapolis known for its progressive history. “I had one foot in academia and the other in the street,” says O’Fallon, who with a partner conceived of the solemn procession of large puppets on the scale seen in European public theater as a means of protest against the Vietnam War and to test his premise that a theater could belong to a community.

“What I saw was his belief that everyone is an artist,” said Sandy Spieler, who got interested in the puppet theater, and, forty years later, remains the artistic director of what is now known as In the Heart of the Beast Puppet and Mask Theater. “David showed us that art builds creativity [and] problem solving and brings people together. He looked deeply into what the world needed right now and said, ‘Let’s do this.’ And the company formed out of that.”

O’Fallon would move his grassroots agenda to the national stage, directing a national task force at the John F. Kennedy Center for the Performing Arts that put the arts into the country’s education goals, and serving as director of education at the National Endowment for the Arts in Washington, D.C. He remembers the tensions at NEA were such in the early 1990s that guards had to be brought in to protect council meetings.

“The Right felt NEA was immoral, the Left felt it was selling out the soul of America,” O’Fallon said. “It hurt NEA in terms of funding but more importantly in how the agency articulated what it wanted to be, what its issues were.”

He returned home in 1995 to run the Perpich Center for Arts Education in suburban Minneapolis: “I felt there were more authentic connections to be made at the state level.” He doubled the center’s budget and expanded programming. At MacPhail, he led a venerable music center from its crumbling old building into a $25 million state-of-the-art center on the Mississippi River. More significantly, student enrollment skyrocketed and community partnerships increased.

“This is what he excels at,” said Neal Cuthbert, a longtime friend and vice president at the McKnight Foundation. “Rather than thinking of MacPhail as a building, he saw it as wheels and spokes that radiated spheres of influence. Not everyone had to come downtown to the main campus. He conceived of MacPhail as a dynamic center with satellite locations.”

At the Minnesota Humanities Center since 2010, O’Fallon has spearheaded initiatives to surface what he calls “absent narratives.” This has led him and the center to publish literature, stage events, and bring attention to communities often defined by stereotypes. He saw that very little had been written about second- and third- generation Hmong or about Somali immigrants to Minnesota. This resulted in two books based on those cultural traditions. With the Dakota and Ojibwe Nations, the center also supported the traveling exhibition “Why Treaties Matter.”

“Whose stories are being left out?” he asks. “How can students see themselves in education?”

Lately, he has been involved with veterans, who are too often pigeonholed as heroes or psychotics. The humanities center helped push legislation to establish October as Veterans’ Voices Month in Minnesota. “The goal is to form common bonds and understanding between veterans and those who were not,” says O’Fallon. The center will be home base for developing new educational resources and links to organizations statewide.

Ensconced in the comfortable, paneled board room at the Humanities Center, O’Fallon smiles at a question. Does he ever wish he was back on the street, running an arts organization?

Graydon Royce writes about theater and the arts for the Minneapolis Star Tribune.