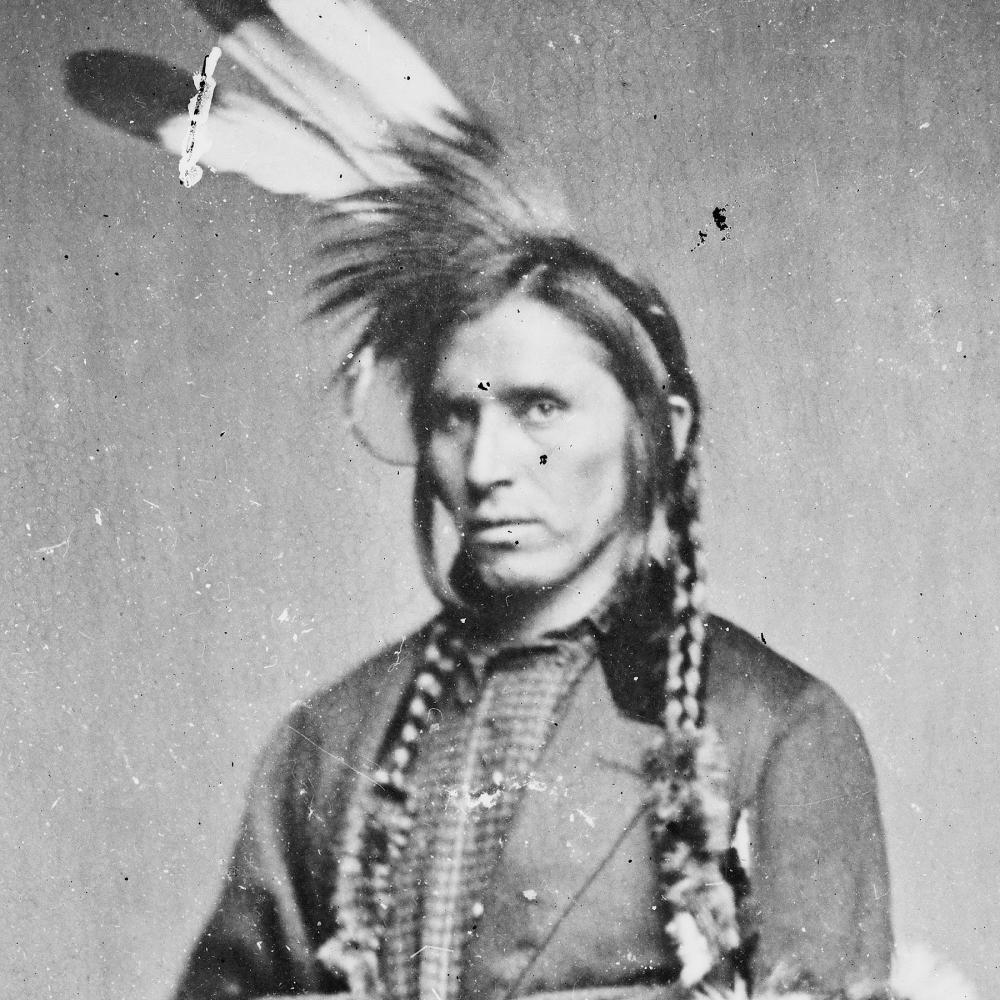 Attacked while on his way from his home to the Indian agency, Chief Hole in the Day (Bagone-giizhig) was assassinated in Minnesota in 1868. By that time, he had become increasingly powerful and distrusted by the members of the many bands he had come to represent. He often wore European clothes, had a lawyer in St. Paul, and had a solid enough command of English to be highly regarded as a public speaker. During negotiations, moreover, the U.S. Government found him to be a staunch defender of his people’s interests. “He was the smartest Indian chief the Chippewa . . . ever had,” wrote a trader shortly after Hole in the Day’s death.

Among the important events for protestors in the U.S. in the watershed year of 1968 was the founding of the American Indian Movement in Minneapolis. The cofounders were Dennis Banks and Clyde Bellecourt, both of Minnesota Ojibwe (oh-JEEB-way) tribes. Ojibwe participated in the takeover of the federal prison on Alcatraz Island in 1969 and were involved in protests at the Bureau of Indian Affairs in Washington, D.C., in 1972 and at the Wounded Knee Trading Post in 1973. Today, though, the tribe’s most widely recognized member is award-winning novelist Louise Erdrich, who also owns and operates Birchbark Books in Minneapolis.

Alluding to an Ojibwe prophecy, Anton Treuer writes in the NEH-funded book Ojibwe in Minnesota (Minnesota Historical Society Press, 2010), the people who emerged as a distinct subgroup fifteen hundred years ago, who were once known as the Chippewa, and who began migrating westward in the eighteenth century had to move to “the land where food grows on water.” “This clear reference to wild rice,” writes Treuer, “was one of the major incentives that brought the Ojibwe from the ancestral homes on the Atlantic Coast to Minnesota.” Today the Ojibwe are a diverse group, with much French, German, and Irish blood running through their veins as well, but they maintain ties to their rice-growing past, ceremonial drum culture, and the Ojibwe language, which has an immersion school on the Leech Lake Reservation and programs at Bemidji State University and two other institutions to train future generations of Ojibwe teachers. Efforts such as these may keep alive the language that has given us many place names in the Midwest and Ojibwe words such as “toboggan,” “papoose,” “chickadee,” “wigwam,” “moccasin,” and, a name well known to many an angler, “muskellunge.”