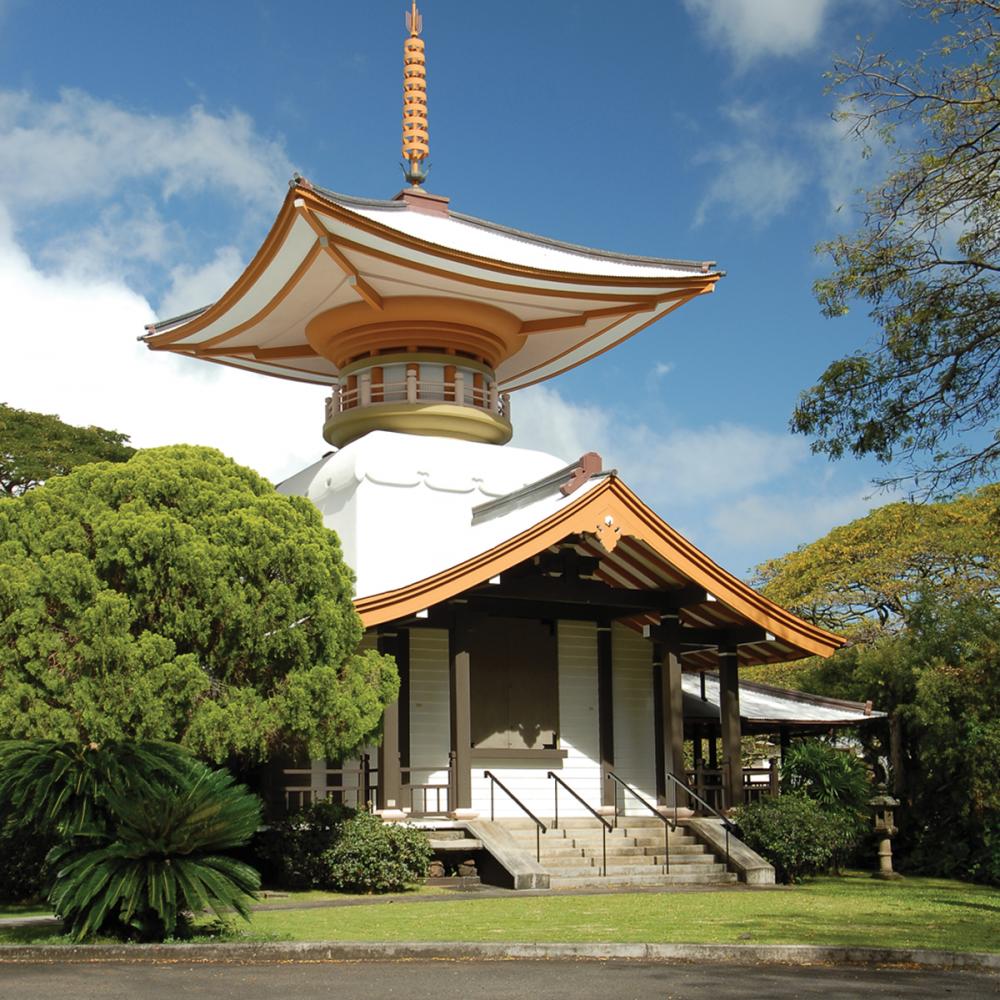 With a Japanese-inspired flared gable roof, concrete blocks resembling clapboard, a wide verandah with a railing, and a large pagoda rising from the rear, Honolulu Myohoji blends Eastern and Western elements in Robert Toshio Katsuyoshi’s 1967 temple. The architect was born in Hawaii, went to live with his family in Japan at age one and returned to the Islands as an adolescent. After working in other firms as a draftsman before and after the war, Katsuyoshi later obtained his architectural license and opened his own firm in the 1960s, when he designed private residences and Buddhist temples that combined Indian as well as Asian and Western influences.

The architectural style most of us associate with Hawaii’s built environment—hipped roofs, moon gates, and pagodas—began to make its appearance in Honolulu in the 1920s and ’30s. Mirroring Hawaii’s gentle climate and diverse natural life, it was shaped by island culture and Japanese, Chinese, and Korean influences. In the 1980s and ’90s, however, when the number of tourists visiting the Islands hit six million a year, there was a boom in modern hotel construction. locals soon joked that the new state bird was the construction crane. The old look was neglected but kept on life support by a small group of talented architects who found ways to add thoughtful and thought-provoking motifs to some high-rises and public buildings.

But before there even was a Hawaiian look to neglect, there was a period when Western styles, especially Beaux-Arts, Queen Anne, and Italianate, prevailed. During the early twentieth century, powerful companies acting as agents for the sugar industry—known as the Big Five—started to dominate the Hawaiian economy. Reflecting the tastes of the powerful elite, some builders’ “unrestrained zeal,” as Don Hibbard calls it in his NEH-funded book Buildings of Hawaii, led to the construction of many iron- and-steel-frame buildings in downtown Honolulu long since demolished.

The features that ultimately came to characterize Hawaiian-style building—which also included breezy lanais, generous overhanging eaves, and textured exterior surfaces—came about as the hold of the Big Five weakened. The Pan-Pacific movement was gaining sway and the polyglot population began finding its many voices and architectural idioms. Churches responded to the “one Blood” sentiment of many of their parishioners by constructing verandah-like lanais on either side of the naves that symbolically welcomed all believers. Architects of the time in general often blended Eastern and Western styles, ushering in a pagoda, for example, to sit in for a bell tower in the task of calling the congregation to service. Hawaiian-style building for a long time seemed to have little to do with the architectural tastes the Islands’ original settlers brought with them from the Marquesas Islands more than eight hundred years ago. The highly specialized skill needed, for example, to tightly weave the thatch that made their structures waterproof began disappearing in the eighteenth century, when the population declined by 90 percent, the result of diseases imported from Europeans. Evolving innovations such as hipped roofs and airy lanais had begun to make their appearance in eighteenth-century Hawaii just as the traditions that made them possible were being obliterated. It took longer than a century for some of the most fundamental aspects of Hawaiian architecture to find their way home again.