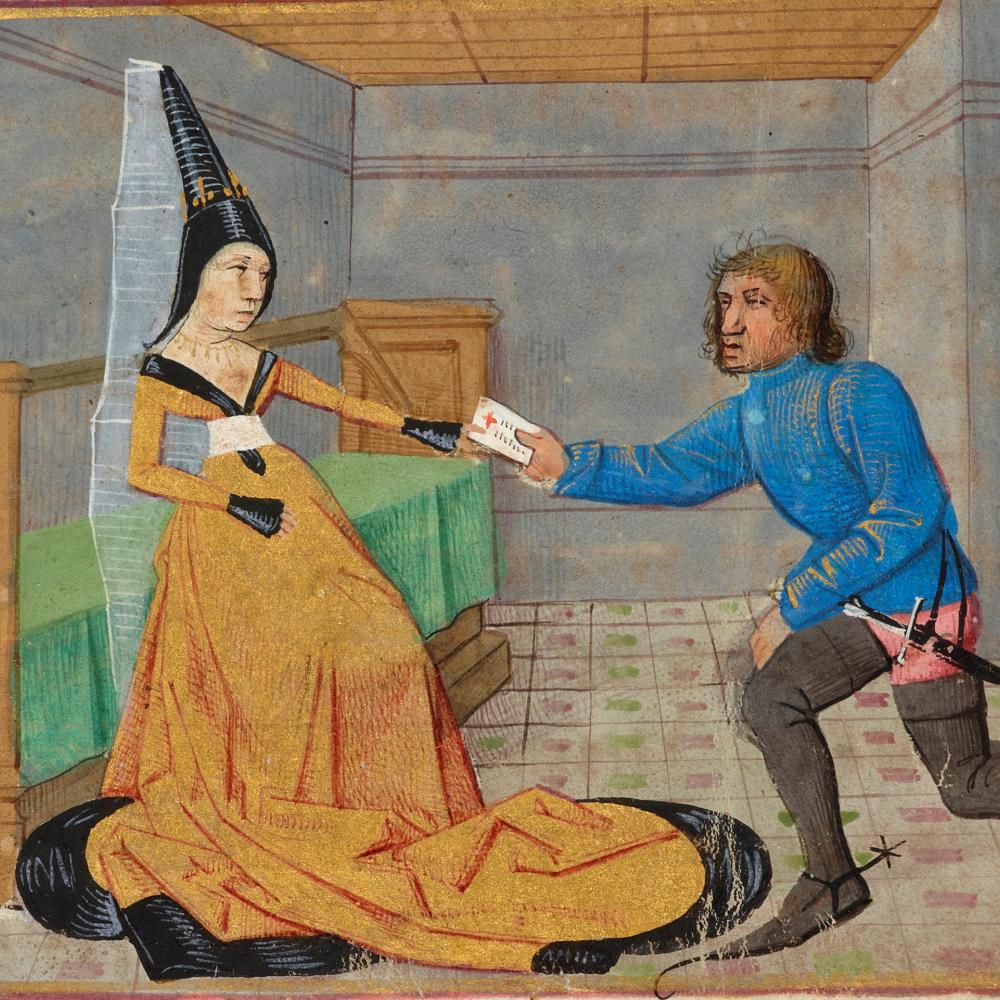 Genevieve Receiving King Mark’s Letter by the Master of the Vienna Mamerot, a detail from Romance of Tristan, France, 1468.

Pierpont Morgan Library, MS M.41, f. 24v. All images are from the Morgan Library & Museum’s 2011 exhibition “Illuminating Fashion: Dress in the Art of Medieval France and the Netherlands.”

Illuminating Fashion: Dress in the Art of Medieval France and the Netherlands, 1325–1515 is like many medieval storybooks. It has knights and ladies, kings and castles, fantastic and fearsome beasts, pageantry and romance. It tells a story of two hundred years, drawing the reader into an exciting world that is both familiar and foreign. But the story is not one of heroic deeds or epic romances. Actually, it’s about clothes. And behind its sartorial history is another story, a fairy tale nearly thirty years in the making, about perseverance, heroic dedication, and the triumph of love.

Once upon a time, Anne van Buren, a scholar of medieval art, received a grant “to support the completion of a book on costume dating in late medieval art, primarily French and Flemish, focusing on illuminated manuscripts, painted panels, and incunabula.” Using only art that was firmly dated or datable to within five years, she aimed to use the fashion portrayed in these artworks to create a timeline that could be used by scholars to date undated art. The project focused on a tiny niche of the historical spectrum, but van Buren’s meticulous work had the potential to clarify a period that is quite muddy, creating a precise timeline to guide scholars in several disciplines. From this apparently modest seed her project grew like Jack’s beanstalk, resulting in a book, an exhibition, a prestigious lecture series, and an enormous contribution to fashion history and art history.

Van Buren was born in 1927 in New York City. Her early interests were far from the obscure reaches of medieval art history. She focused on mathematics and science, two fields requiring objective and precise work, perhaps influencing her later research methodology. It wasn’t until the early 1960s that her interests took a more artistic bent. In 1964, she received her master's from the University of Texas, after writing a thesis about portraits of Paul Cézanne’s wife. While working toward her doctorate at Bryn Mawr College, van Buren met L.M.J. Delaissé, a scholar of Belgian manuscripts, and became fascinated with medieval manuscripts.

She became a professor at Tufts in 1975, and in the early 1980s and began the enormous work that later became Illuminating Fashion. Her first step was simply to locate medieval imagery either firmly dated or datable within a five-year period. With the help of her research assistant—a young scholar named Roger Wieck who was beginning to make a name for himself in the world of illuminated manuscripts—she pored through every resource she could find, looking at books, catalogs, and traveling the world to visit archives. Before even completing this inventory, they began to edit the collection. Van Buren and Wieck were seeking the very best representations of contemporary medieval fashion. With this selection, a timeline began to form, yielding not only a chronology but an illustration of how the evolution of medieval fashion mirrored the evolution of medieval society.

Wieck left the project in 1985, while van Buren continued to work on her own, her database growing ever larger. In 1986, she received a second grant, but even after those funds ran out, she kept working on the project. As the years went by, scholars in the field of medieval manuscripts continued to hear about the proposed book. Always extremely active in her field, van Buren would attend conferences and lectures and question the dates of the manuscripts presented, saying they were wrong because of the clothing and adding, “You’ll read all about it in my book!” But the book did not materialize. “It took so long to do it, people began to doubt it actually existed,” remembers Wieck.

In the 1990s, an old friend rode in to help the book finally come to fruition. Wieck, now working at the Morgan Library & Museum, wanted to bring this research out of its tower and share it with the world. It would take a king’s ransom to fund publication, but money came from the Franklin Jasper Walls Lecture Fund, a prestigious grant established in the late 1940s to promote lectures representing the highest scholarship and their publication in book form. This never-ending research project, it seemed, might finally take its place among the best scholarship of medieval history, but there was still more work to be done.

Van Buren was always questioning. Famous among historians for her book reviews, she once traveled all the way to Vienna to study the actual manuscripts used in the catalog she was assessing. Even in casual conversation, remembers Wieck, “she always wanted to know how you reached a certain opinion, why you thought what you thought.” Naturally, her research methods were extremely thorough as well. So, it wasn’t until 2006 that van Buren turned in a final manuscript for editing. It was one thousand pages long.

Editing this work was a large project in its own right, as van Buren’s arthritis had led to many typing errors. Wieck edited the introduction and all the commentary on the images, making sure the descriptions were crystal clear. “If I didn’t know who she was talking about, nobody would,” he said.

In 2008, it was suggested that although the publication of the book and the opening of its accompanying exhibit were scheduled for further down the line, van Buren should give her Jasper Walls lectures sooner. In May, she gave three lectures, entitled “The Role of Dress in Society,” “Do They Wear What We See?” and “The Function of Dress in Art.” Then, unexpectedly, in the fall she passed away. But the work on her magnum opus continued, and in May of 2011, nearly thirty years after the project began, Illuminating Fashion was finally published as a beautiful book and curated as an exhibit at the Morgan.

Now that Illuminating Fashion is published, it’s clear that van Buren’s years of hard work have paid off in a way that is nothing short of extraordinary. Many people think that fashion as a concept didn’t begin until the sixteenth or the eighteenth centuries. And that the medieval world was filled with relatively static and simple styles: men in tights and women in pointy hats. Van Buren’s book proves that fashion was alive and well in the Middle Ages. It grew and changed in response to politics, social change, and cultural influences. It reflected status and character.

The first two plates show a radical shift. Plate 1, with images from 1324–26, shows the bulky and basic cut of garments, made in a T shape with the sleeves and body of the same piece. Plate 2, with images from 1330–ca. 1335, shows that even in such a short span of time fashion was already on the move: The basic T-shaped cotes and surcots transform into the shorter cote hardy, a garment that utilized the set-in sleeve. Images from 1415–17, shown in Plate 33, depict how fashion stopped for a brief moment after the French defeat at Agincourt. Fashion also depicts character traits. For example, exoticism is expressed in wide, jewel-trimmed borders on garments and turbans. Sinfulness is expressed through high fashion, while older styles adorn the virtuous. By meticulously observing the tiniest details, van Buren decoded each image, discovering the subtle shifts in fashion from year to year and how small nuances can express character and themes.

Illuminating Fashion was also the name of the exhibit that opened in the summer of 2011 at the Morgan Library & Museum. Curated by Wieck, the exhibit showed the same attention to detail and passion for the subject as the book did. Wieck pored through the Morgan’s manuscripts, looking for, as he put it, “the zaniest images.” Although many manuscripts didn’t have firm dating information, Wieck was able to assign dates for some using van Buren’s research. Fifty-five manuscripts were displayed, showing the beautiful images from the book in their original contexts. Although the manuscripts were safely tucked in glass cases, the viewer could imagine how the images would come alive for a medieval reader, the gold leaf decorating many of the pages shimmering in the candlelight.

Along with the manuscripts, four elegantly dressed medieval lords and ladies reside in the center of the room. Wieck wanted visitors to get a sense of the reality of medieval clothing, its weight, bulk, and elegance. He wanted people to be able to see how “that small little picture actually reflects clothing that people wore.”

The recreations were made by Corinne Roes of Atelier Mette Maelwael in the Netherlands. The only machine finishing was the embroidery on a blue silk velvet houpeland. Wieck loved the example of embroidery, but turned to the Audax Textielmuseum Tilburg to machine-embroider it as “there are not enough blind nuns left in the Netherlands.” The most familiar of the recreations is the tall, cone-shaped hat, called a turret, worn by a lady from the Romance of Tristan from 1468.

“A lady in a gown with a turret is what everybody thinks of when they think of a costume from the Middle Ages,” says Wieck. But through this broader array of recreations, people could see beyond the pointy hats to elegant lords and ladies, to individuals, each with a unique and elaborate style of their own.

With Illuminating Fashion, van Buren has contributed a concise and detailed history of fashion from the fourteenth through the sixteenth century, a resource that will aid fashion historians and art historians the world over. “To me, she totally achieved the goal that she set for herself,” says Wieck. “She did write a firm history of costume for this period using only firmly dated or datable material. You will be able to use costume now as a means for dating undated art, which was one of the things she was very keen and interested in.” And it is not only scholars who will benefit. Van Buren’s work is that rare gem that can be enjoyed and understood by anyone, whether they have dedicated their lives to medieval studies or simply have a passing interest, having perhaps been intrigued by the knights and castles of childhood tales.

Once upon a time, a brilliant scholar began a journey. It took her almost thirty years to complete. But she was helped by assistants, and though time was her enemy not even death could stop her from attaining her goal. In the end, love won the day, a love that kept the scholar working over endless years. A love that is written into every sentence of her book. A love that is reflected in the dedication of her friends and colleagues to see her dream realized. And they all lived happily ever after. The end.

Katy Werlin has a BA in dramatic arts from the University of North Carolina at Chapel Hill, and is currently working toward her MA in visual culture: costume studies at New York University. She writes and maintains a blog called The Fashion Historian.

The late Tufts University professor Anne van Buren received two research grants—the first for $69,000 in 1983, the second for $40,000 in 1986—from the National Endowment for the Humanities for work contributing to her catalog of datable clothing in in medieval art.