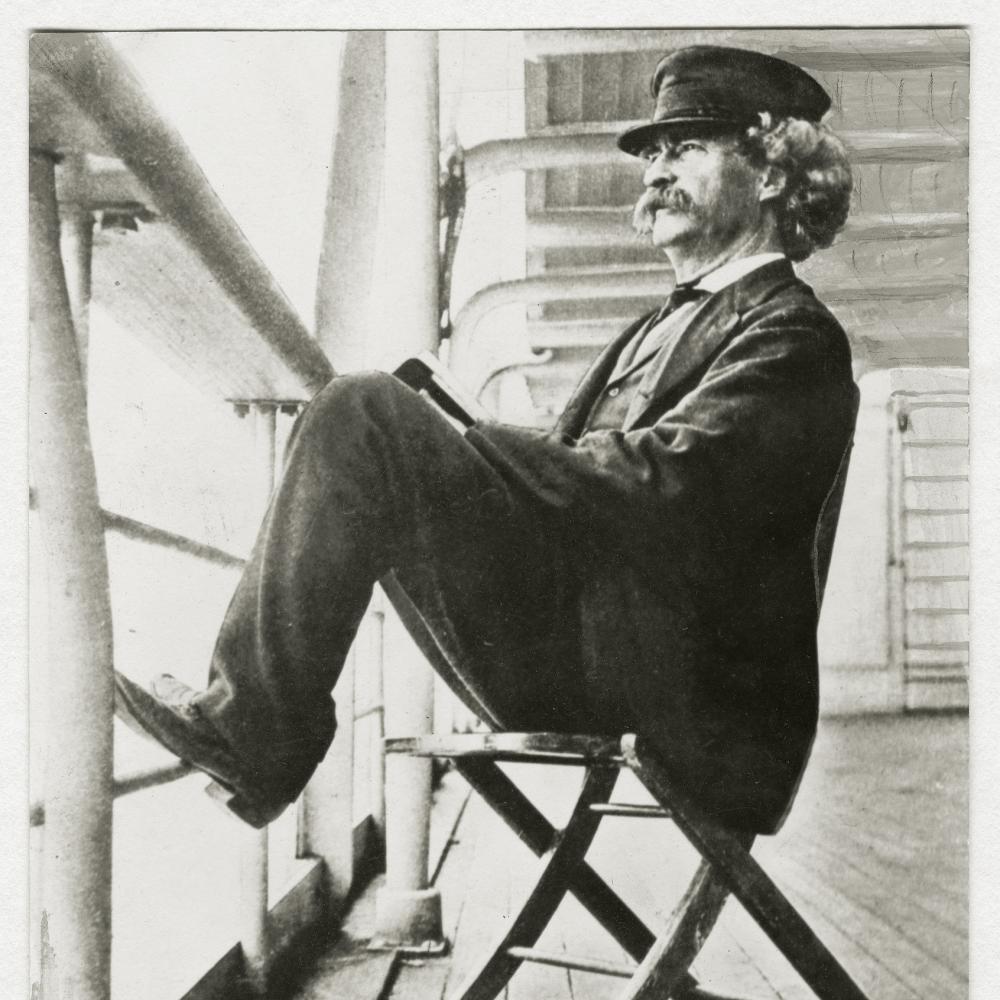 “Be good and you will be Lonesome” wrote Mark Twain on this photo from his trip around the world, which opened his book Following the Equator, 1897. The quote is also the chorus of a Jimmy Buffett song.

Mark Twain came in and went out with Halley’s Comet. 2010 is his 175th birthday and also the 100th anniversary of his death, the magic year when Twain’s memoirs are being released from their century of silence.

Also being released this year is a new CD from the Mark Twain Boyhood Home & Museum in Hannibal, MO, that tells the story of Twain through narration, quotation, and song. The museum’s director, Cindy Lovell, has gathered some of the best musical talent around to finally bring together her two long-standing passions—bluegrass and Mark Twain.

Lovell grew up in rural Pennsylvania. Her family’s main hobby was listening to bluegrass music, traveling up and down the East Coast to hear their favorite bands. Along the way, she met a fourteen-year-old banjo phenom named Carl Jackson playing with Jim and Jesse and the Virginia Boys (Lovell was only twelve and developed quite a crush on the older boy). They kept up a friendship through letters until Jackson signed on with Glen Campbell and his career took off. They lost touch.

Fast-forward a few decades to 2003, when Lovell found herself listening to Jackson’s Grammy-winning CD, Livin’, Lovin’, Losin’: Songs of the Louvin Brothers—a tribute to Ira and Charlie Louvin that contains some archival audio and new arrangements of their songs. “It felt like a story,” she remembers. Lovell wondered, Could something similar be done to tell about Mark Twain’s life? Would Jackson be interested in the project? Would he remember her?

Not only did Jackson remember Lovell, he still had her letters. And he believed in the project. He brought in other top country musicians he’d worked with over the years—Brad Paisley, Vince Gill, Emmylou Harris, Alison Krauss—to contribute their talent to Mark Twain: Words & Music, which will be released in Hannibal on November 30, Twain’s birthday. Because the CD is mostly biographical, the comet and the Mississippi River figure prominently, as do Twain’s travels overseas, and family life.

Lovell believes that Mark Twain is “as relevant now as he ever was.” The narrative part of the CD, twenty-five minutes in all, broken into thirteen segments, is read by Garrison Keillor. TK is the voice of Twain, whose quotes from his autobiography and other writings deliver gems about his life and times: “When I was a boy,” Twain explains, “there was but one permanent ambition among my comrades in our village on the west bank of the Mississippi River. That was, to be a steamboatman. We had transient ambitions of other sorts, but they were only transient. When a circus came and went, it left us all burning to become clowns; the first negro minstrel show that came to our section left us all suffering to try that kind of life; now and then we had a hope that, if we lived and were good, God would permit us to be pirates. These ambitions faded out, each in its turn; but the ambition to be a steamboatman always remained.”

That quote introduces a new song written just for the CD by Priscilla Houliston and Carl Jackson, called “Run Mississippi” and performed by Rhonda Vincent. Seven of the thirteen songs are new, including “Safe Water,” which recounts Twain’s travels abroad and sneaking out of his quarantined boat to see the Acropolis by moonlight. “Huck Finn Blues” was composed by two fellow teachers on a late-night drive after attending a teacher workshop on Twain at the museum, sponsored by the Missouri Humanities Council. It offers further proof, beyond Jimmy Buffett lyrics, of the musical inspiration to be found in Twain’s words. “All of us contain Music & Truth, but most of us can’t get it out,” he once commented.

“It’s really music disguised as history,” says Lovell, who was first introduced to the writings of Mark Twain by her enthusiastic fourth-grade teacher. A love affair with Twain continued through her varied careers and family life; in fact, Lovell spoke about him so much, her children “grew up thinking Mark Twain was an old family relative.” Lovell’s daughter even chose for her wedding ceremony a quote from Twain’s letter to his future bride, Olivia Langdon, about their upcoming nuptials. It is a Lovell family favorite and is included on the CD:

…it makes of two fractional lives a whole; it gives to two purposeless lives a work, & doubles the strength of each whereby to perform it; it gives to two questioning natures a reason for living, & something to live for; it will give a new gladness to the sunshine, a new fragrance to the flowers, a new beauty to the earth, a new mystery to life; & Livy, it will give a new revelation to love, a new depth to sorrow, a new impulse to worship. In that day the scales will fall from our eyes & we shall look upon a new world. Speed it!