While vacationing in Queens, Cooper suffers a fever and writes the violent twelfth chapter of The Last of the Mohicans. 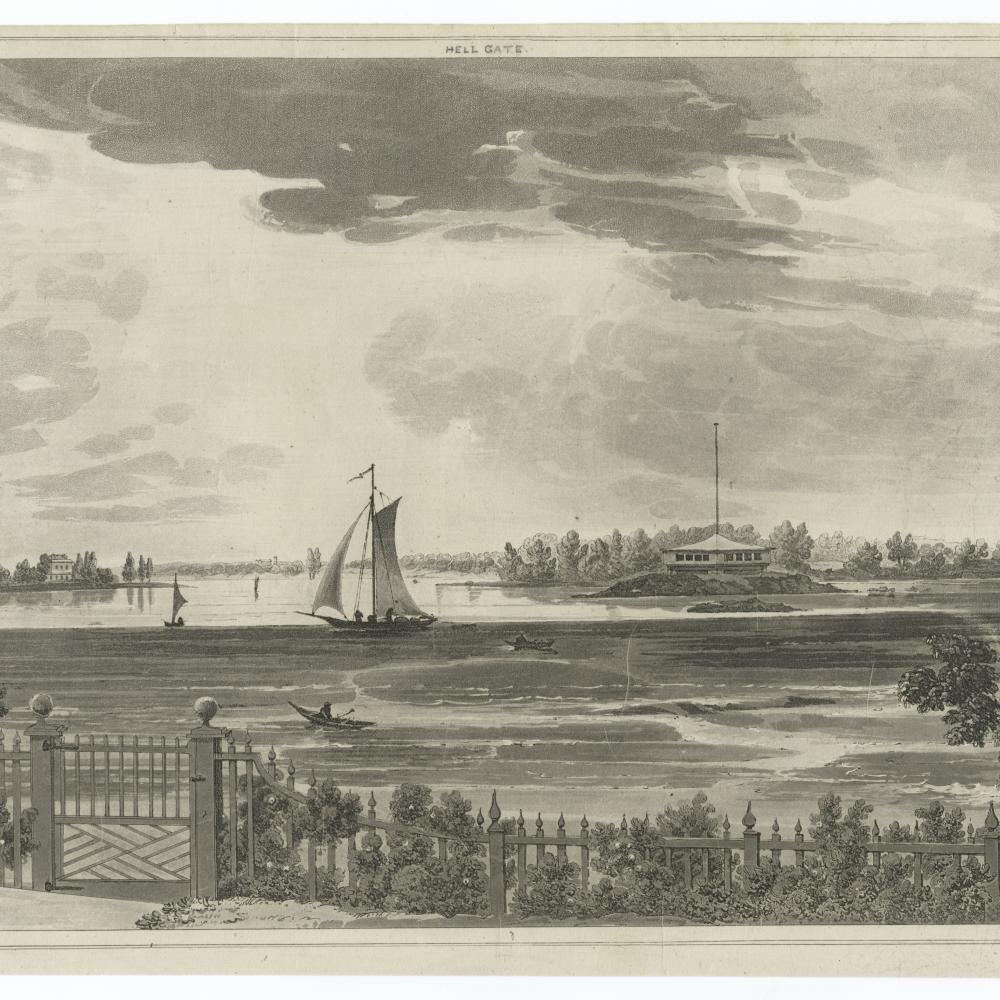 As spring advanced in 1825 and James Fenimore Cooper was immersed in the grim forest of The Last of the Mohicans, his family made plans to leave New York City for more pleasant quarters. After successfully weathering the usual “bustle and confusion” such shifts entailed, they crossed the East River to Queens to take up residence in an old farm cottage, which belonged to a wealthy New York friend, Colonel George Gibbs.

The Coopers had the run of Gibbs’s magnificent farm. With its own wharf on the shore below the stretch of turbulent waters called Hell Gate, the estate catered to the novelist’s favorite pleasures. Sitting on the green bank out front, Cooper was delighted by the busy nautical show laboring through the narrow passage between the shore and Blackwell’s Island. In the evenings, his eldest daughter recalled, he would instruct the children in the lexicon of the sea: the parts of a sailing vessel’s rigging, the names of the different kinds of craft, and even such exotica as how to distinguish “periaguas and chebacco boats.”

Cooper soon had a little vessel of his own tied up at the wharf, a twenty-ton, broad-bowed sloop christened the Van Tromp after the legendary Dutch admiral. In it, he would run over to New York, often taking his daughter Susan with him. On Wall Street, he would conduct business with his publisher Charles Wiley and then wait at the bookstore for the tide to change. Chapter by chapter, The Last of the Mohicans was being delivered to Wiley and passed onto the printer.

When the water and the Van Tromp did not beckon, the Coopers could turn and go inland. Cooper had a farm wagon with a pair of black horses; in this plain vehicle he would drive his four daughters and little Paul, fifteen months old in May, around the estate and back amid the fields and orchards. Or he would carry all of them south of the cottage to the beach, shady and shell-strewn, where they could loiter and bathe as if nothing were wrong—as if Cooper himself were as healthy and rich as Colonel Gibbs.

It was amid these wishful diversions that, within a month of the family’s move, the novelist reported that he had had a touch of his “old fever.” In late May, his novel began to suffer. Illness stopped his pen, but so strong was the grip of the suspended book that its action kept playing over in his mind throughout the siege. One afternoon, no longer able to restrain himself, but in a nearly delirious state, he suddenly demanded pen and paper so that he could resume the book. His will overshot his strength. He was so weak that he still could not even hold the pen; only with his fearful wife acting as amanuensis was he able to dictate a single page of seemingly jumbled notes that sketched out the key action of a fresh chapter, the book’s violent twelfth.

The first eleven chapters had introduced the main characters—the Munro party, Natty Bumppo, Chingachgook, and Uncas—brought them together, temporarily dispersed them, then brought them together again for the tale’s first serious battle at “Glenn’s.” That battle, a foretaste of the massacre near Fort William Henry later in the novel, resulted in the capture of the Munros, Gamut, and Heyward, as well as the flight of Natty, Chingachgook, and Uncas.

When he returned to work, Cooper continued directly from the eleventh chapter into the twelfth: “The Hurons stood aghast at this sudden visitation of death on one of their band,” the first sentence reads. But it was not a simple continuity of plot. During his fever, according to Susan, Cooper’s “mind was filled with images.” All he uttered seemed like “the wild incoherent fancies of delirium.” But, after he recovered, it was clear that he had envisioned the next episode of the book with uncanny power.

This chapter proved to be one of the most violent and disturbing episodes in all of Cooper’s works. In the wake of a deadly battle pitting a Huron war party against Natty Bumppo and his Mohican companions, the reader’s attention is suddenly riveted by the hand-to-hand struggle between the noble Chingachgook and the wily Magua. “Twisted together, like twining serpents,” the two warriors tumble about on the forest floor, raising such a cloud of dust that Chingachgook’s son, Uncas, is powerless to intervene. Good and evil mix in the whirlwind of battle until, at the moment when Chingachgook seems about to claim victory, Magua rolls away over a nearby cliff and escapes. “In vain did Uncas dart around,” Cooper wrote, “with a wish to strike his knife into the heart of his father’s foe. . . . Covered, as they were, with dust and blood, . . . the combatants seemed to incorporate their bodies into one.”

Cooper used intensely figurative language. He was also fascinated with the imagery of Native American culture: for instance, with “those oriental images” that he, like others of his era, thought suggested a link between the Indians and cultures of Asia. Cooper’s Indian speakers employ poetic, highly expressive images that state complex, at times abstract, propositions in terms of sensible facts. In one of his more moving utterances, Chingachgook expresses his spiritual decline in accessible physical terms: “I am on a hill-top, and must go down into the valley; and when Uncas follows in my footsteps, there will no longer be any of the blood of the Sagamores, for my boy is the last of the Mohicans.” In Cooper’s 1831 preface to the novel, he wrote: “The imagery of the Indian, both in his poetry and in his oratory, is Oriental. . . . He draws his metaphors from the clouds, the seasons, the birds, the beasts and the vegetable world.”

The natural world, the source of Indian imagery in Cooper’s view, also provides much of the author’s own imagery. In Natty’s night-shrouded description of the falls in Chapter 6, the river is roaring down the rocky chasm on either side of the Munro party as the scout endeavors to “place” them in the invisible landscape. The water constantly mimics the things of this world, and suggests a host of moods: “sometimes it leaps, sometimes it tumbles; there, it skips; here, it shoots.” All of the river’s fascination for Natty and Cooper is summed up when Natty turns toward one of the Munros: “Ay, lady, the fine cobweb-looking cloth you wear at your throat, is coarse, and like a fish-net, [compared] to little spots I can show you, where the river fabricates all sort of images, as if, having broke loose from order, it would try its hand at everything.” The wild river in some of its moods can outdo the finest production of human art, the most delicate of lace. Nature overwhelms Cooper’s characters with its protean, shape-mimicking power.

In Cooper’s prose is the first and best demonstration of what he had learned from Indian culture: that art, like all else that is human, is an effect of nature, an expression of it, rather than its externally imposed frame that shapes and contains the world.

Wayne Franklin is a professor of English and director of American studies at the University of Connecticut. He received an NEH fellowship to support his research on James Fenimore Cooper.