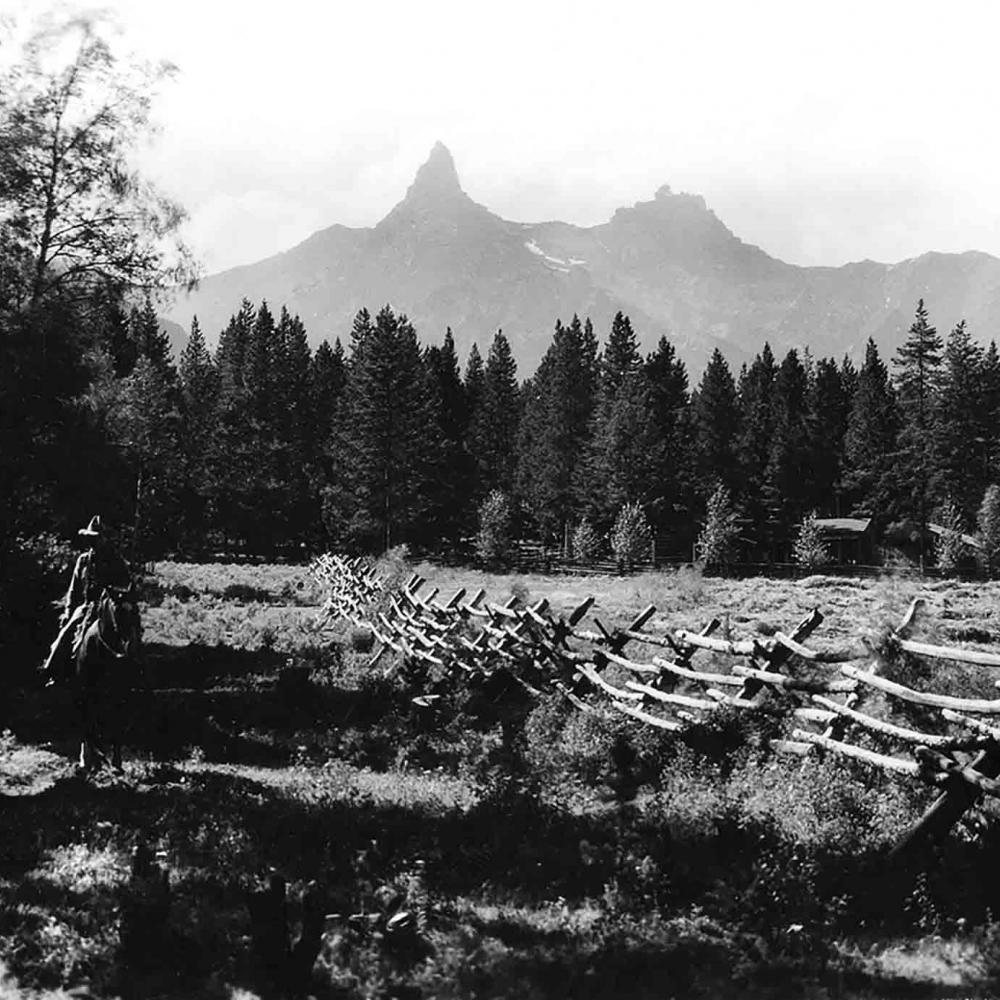 A view of Pilot Peak from the L-Bar-T Ranch, where Hemingway spent many summers in the 1930s.

When Ernest Hemingway was in Wyoming, he finished writing A Farewell to Arms and wrote parts of Death in the Afternoon, To Have and Have Not, Garden of Eden, and Across the River and Into the Trees.

While in Wyoming, Hemingway stayed at the Folly and Spear-O-Wigwam ranches in the Bighorn Mountains above Sheridan. In the summer of 1928, he wrote 600 pages, and he and his second wife, Pauline Pfeiffer, a journalist, caught 600 trout.

While in Wyoming, Hemingway stayed at the L-Bar-T Ranch north of Cody. The Cody Enterprise reported that he “was brought to Cody on Tuesday evening to receive surgical attention” after “a horse (a bay named Goofy) bolted with him, carrying him through some heavy brush and tearing his face in such a manner as to require several stitches to patch up the wounds.”

The article went on to note the subsequent exchange. Hemingway said, “I want to buy that horse.” The outfitter said, “Gosh Mr. Hemingway, there are much better horses in the string than that one.” To which Hemingway replied, “I don’t want him for riding, I want to shoot the SOB!”

While in Wyoming, Hemingway and his soon-to-be third wife, Martha Gellhorn, a war correspondent, stepped off a train to get married in the Union Pacific Depot in Cheyenne. Years later, he almost lost his fourth wife, Mary Welsh, also a war correspondent, due to complications from an ectopic pregnancy in Casper.

While in Wyoming, Hemingway served his friends a lunch of bear steaks: “The meat was rank and stringy, cooked middling rare, and eaten in the form of sandwiches made from sourdough pancakes spread with orange marmalade. But Ernest consumed his portion with evident gusto, chewing long and appreciatively, his black beard glossy with bear fat,” said a friend.

Walking from their tent at Spear Ranch in the Wolf Mountains, north of Sheridan, are Hemingway and his second wife, Pauline Pfeiffer Hemingway, 1928.

From the 1910s to the 1960s, Hemingway was an award-winning novelist, short-story writer, sportsman, and journalist. He was known for his spare laconic style, a vestige of his early journalism career at the Kansas City Star. Many subsequent writers—Norman Mailer, for one—acknowledged Hemingway as an influence, in that he made it cool for masculine men to write. A serial husband, he was also pathologically accident-prone.

Hem, as he was dubbed by his friends, was drawn to Wyoming while recuperating from shrapnel wounds in Italy during World War I. At age 18, he was “a tall, handsome, muscular, broad-shouldered, brown-eyed, rosy-cheeked, square-jawed, soft-voiced young man,” as described by his biographer Jeffrey Meyers. Hemingway had tried to join the U.S. Army and the Marines earlier that year but was turned down due to poor eyesight. Instead, he volunteered for the Red Cross as an ambulance driver.

On July 8, two weeks before his birthday, Hemingway was seriously wounded by mortar fire while bringing chocolate and cigarettes to the troops by bicycle. In the next room was fellow ambulance driver and future U.S. Ambassador Henry Villard, who suffered from jaundice. Villard described in rapturous terms a ranch in northern Wyoming where he had spent the previous summer. Villard said, “I am going to live out there, Hem,” to which Hemingway replied, “Hell, I’m going out there myself someday.”

If you love Ernest Hemingway, there’s no substitute for standing where he stood, the green expanse of the rolling plains stretching out before you, the blue toothy peaks with their white caps looming in the distance, the melodic whistling dee-dee-dadi-didle-ip of the meadowlarks sounding all around you, the air fresh with the recent rain, the sun warm on your shoulders, anticipating an afternoon’s fishing, a hearty dinner, and your friends at the bar.

Now you can experience Hemingway’s Wyoming for yourself, thanks to Explore Hemingway, a yearlong celebration of the writer’s life and work developed by Sheridan College, Wyoming Humanities, the Ucross Foundation, and the Wyoming Institute for Humanities. An especially interesting aspect of the project is Hemingway Highways, an audio auto tour, with photos and a map narrated by Hemingway’s granddaughter Mariel. The tour in north-central Wyoming stretches 40 miles along a good but winding highway from Sheridan to Big Horn to Buffalo. The tour can take a mere two hours but is best savored for a full day.

You don’t need to be connected to 4G or Wi-Fi to hear the wide-ranging shorts, which are triggered by location, because the content is downloaded when you first access it. Stories reference historic haunts such as Buffalo Bill Cody’s Sheridan Inn, the Mint Bar, the Occidental Hotel, and the Last Chance Saloon, as well as iconic figures such as the outlaw Butch Cassidy and the author of the Longmire book series, Craig Johnson. Hemingway stayed at the Sheridan Inn and Occidental Hotel before retiring to the Folly and then Spear-O-Wigwam ranches high in the Bighorns, and he caroused at the Mint Bar and the Last Chance Saloon.

There are optional detours along the way. One to the Ucross Foundation takes you to this artists’ retreat and sponsor of the project. Another, on steep red-grade switchbacks up the side of the Bighorn Mountains to the Folly and Spear-O-Wigwam ranches, is feasible only for the intrepid driver and is impassible earlier than June or July due to snow. Be warned—this detour is not for the faint of heart. Another far-flung detour is to the town of Shell, where Hemingway and Pauline visited an aging Owen Wister, author of The Virginian, also set in Wyoming.

Hemingway and Frances “Bunny” Thorne as guests at the Folly Ranch, west of Sheridan, in August 1928. Thorne later married Hemingway’s friend Bill Horne, whom she met at the ranch that summer.

Hemingway Highways is a chapter of the app TravelStorys, both of which are free to download. A future chapter will chronicle Hemingway’s time in western Wyoming from Cody to just south of Cooke City, Montana.

The road tour is just one element of the Explore Hemingway project. This year’s One Book Wyoming, a statewide discussion series administered by the Wyoming State Library and Wyoming Humanities, chose Hemingway’s short-story collection In Our Time. Explore Hemingway includes Hemingway-focused writers’ symposiums and workshops, community forums hosted by the University of Wyoming’s Saturday U, and performing arts and musical performances. The project will culminate in a pilgrimage of Hemingway enthusiasts from around the world to Sheridan College from July 19 to 23, 2020—coinciding with Hemingway’s 120th birthday on July 21—for the International Biennial Hemingway Society Conference.

The text of this article is available for unedited republication, free of charge, using the following credit: “Originally published as “Walking in Hemingway’s West” in the Summer 2019 issue of Humanities magazine, a publication of the National Endowment for the Humanities.” Please notify us at @email if you are republishing it or have any questions. 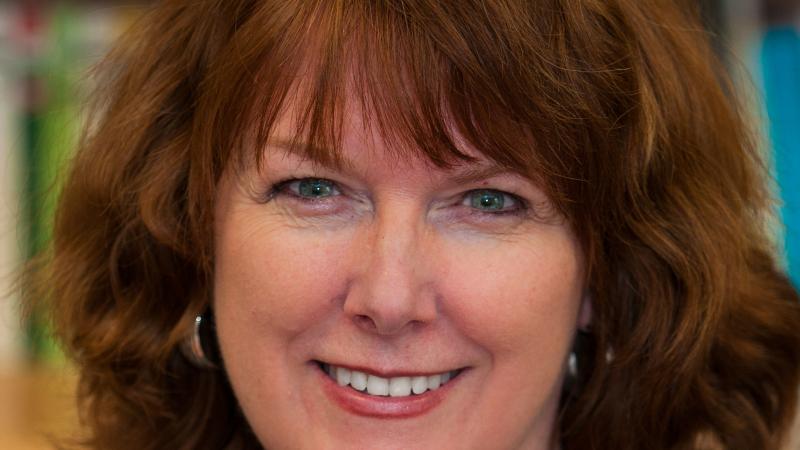