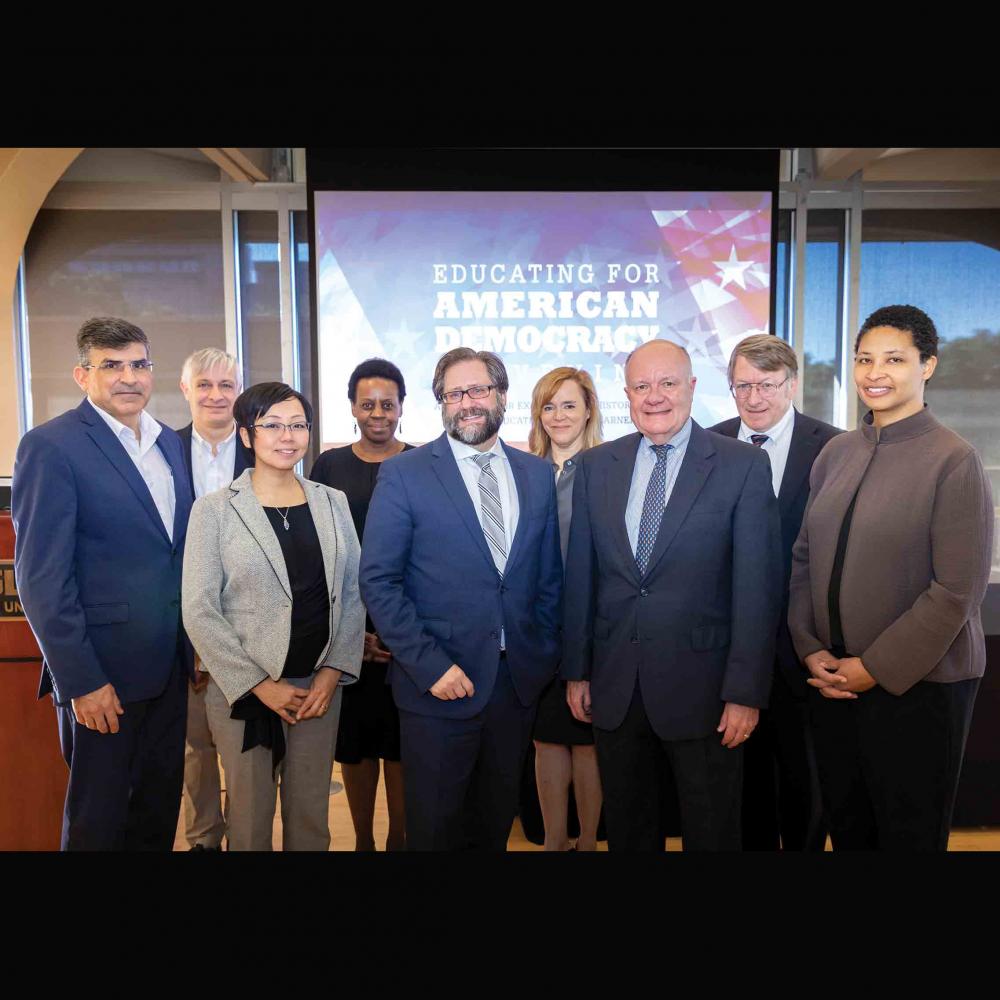 The National Endowment for the Humanities awarded a $350,000 supplement to a cooperative agreement with iCivics for the dissemination of Educating for American Democracy: A Roadmap for Excellence in History and Civics Education for All Learners.

“Educating for American Democracy is an effort to provide guidance for integrating history and civics so that today’s learners form a strong connection to our constitutional democracy—and take ownership of it,” said Louise Dubé, executive director of iCivics. The project, originally funded by an interagency agreement between NEH and the Department of Education, includes partnerships with the Edmond J. Safra Center for Ethics at Harvard University, the School of Civic and Economic Thought and Leadership at Arizona State University, Tufts University Center for Information & Research on Civic Learning and Engagement, Jonathan M. Tisch College of Civic Life, and more than a hundred prominent scholars and educators. The Roadmap will be released in early 2021, and the supplement will fund the production of a website and other materials to help educators integrate the project’s findings into the classroom and beyond.

In July, NEH announced $30 million in grants for 238 humanities projects. This round of funding, NEH’s last for fiscal year 2020, supports vital research, education, preservation, and public programs in the humanities. Fifty million dollars in annual operating support was also provided to the national network of state and jurisdictional humanities councils.

“These challenging times underscore how important the humanities are to making American culture and world history relatable across generations,” said NEH Chairman Jon Parrish Peede. “NEH is proud to award hundreds of grants to keep our nation’s scholars, students, teachers, and citizens moving forward in pursuit of new knowledge and understanding.”

Grants will help many projects continue work, such as the editing of the collected papers of presidents George Washington, John Adams, John Quincy Adams, and James Monroe, as well as the papers of Mark Twain, Thomas Edison, and Jane Addams, and the multivolume Freedom: A Documentary History of Emancipation, 1861–1867. Additional funding will support the ongoing digitization of newspapers published from 1690 onward in Alaska, Alabama, Colorado, Maine, Maryland, and New Jersey for inclusion in Chronicling America, the online database of historic American newspapers housed at the Library of Congress.

NEH grants will also help protect the Amistad Research Center’s holdings on the history of African Americans from the 1780s to the present and preserve more than 600,000 historic objects, records, and artworks at the Autry Museum of the American West. Additional preservation grants will safeguard film footage documenting the history of Appalachia at Kentucky’s Appalshop; preserve archives related to the 1986 Challenger Space Shuttle disaster at the McAuliffe-Shepard Discovery Center in New Hampshire; upgrade storage conditions for heritage materials on the Miami people at the Myaamia Heritage Museum & Archive in Oklahoma; and protect important jazz history recordings, photographs, and memorabilia at Preservation Hall in Louisiana.

A colored engraving from 1840 shows the death of Captain Ferrer during the slave rebellion aboard the Amistad. The Amistad Research Center in New Orleans takes its name from the ship, made famous by the subsequent legal triumph of its passengers.

NEH supports cutting-edge humanities research such as an interdisciplinary study of the origins of writing in Mesoamerica and an investigation using computational linguistics to see if unattributed editorials in the Brooklyn Daily Times were written by Walt Whitman. Research teams will use new NEH grants to create an online historical atlas of the communities connected to the copper-mining industry in Michigan’s Upper Peninsula between 1880 and 1950 and to uncover long-hidden contents of a medieval book of chants through multispectral imaging.

Twenty-five new NEH Public Scholars will produce accessible works, including a new biography of poet Robert Frost, for a wide swath of readers. Many grants support other projects for the general public, including a documentary on the Rosenwald Schools, which educated black youth in the Jim Crow era, and a traveling exhibition on American craft since 1940 from Arkansas’s Crystal Bridges Museum of American Art.

Forty-six grants will provide summer professional enrichment and research opportunities for K–12 teachers and college faculty on topics ranging from the Federal Writers’ Project and the history of Santa Fe, New Mexico’s pueblos to the Chinese-American experience in California and the life and writing of Zora Neale Hurston.

The traveling exhibition on American craft will include Tigris T-1, 2018, by Anne Lemanski, made of copper rod, archival print, artificial sinew, epoxy, and plastic.

NEH’s A More Perfect Union looks forward to the nation’s semiquincentennial in 2026 and supports projects that contribute to a deeper understanding of U.S. history and culture. With NEH support, the Newberry Library in Chicago will hold a series of community programs examining the influence of the American Revolution on similar struggles for independence in Latin America. In Connecticut, the Noah Webster House & West Hartford Historical Society will digitize materials in its collection of Revolutionary-era records for use in classrooms. Other grants will help preserve artifacts and archival materials at Plimoth Plantation, underwrite new interpretive tours at Old Sturbridge Village, and enable production of five television episodes for PBS’s Poetry in America.

Next year, for the twentieth anniversary of 9/11, the National September 11 Memorial and Museum at New York’s World Trade Center will send a traveling exhibition and public programs to twenty libraries across the country.

This article is available for unedited republication, free of charge, using the following credit: “Originally published as “Recent NEH Grants” in the Fall 2020 issue of Humanities magazine, a publication of the National Endowment for the Humanities.” Please notify us at @email if you are republishing it or have any questions.