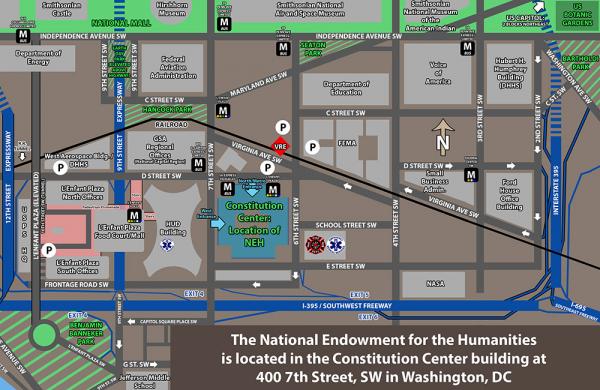 Map of the NEH's location at Constitution Center, which is at 400 7th Street

Tips for travel to NEH

METRO NEH is conveniently located in the Constitution Center at 400 7th St. SW  in Washington D.C. atop the L’Enfant Plaza Metrorail station, which is a stop on the Blue, Yellow, Orange, Green lines. Once in the L’Enfant Plaza station, follow signs for the 7th & D St. exit. Access to the Red line at Gallery Place is two stops away on the Yellow and Green lines, and Metro Center is three stops away on the Blue and Orange lines. A map of the Metro system is available here.

TRAINS Amtrak trains stop at Union Station, which is also a stop for Red line Metrorail trains; follow the Metro directions above to reach NEH.

The Virginia Railway Express (VRE), a commuter railroad in Virginia with two lines (one to Manassas and one to Fredericksburg) also offers nearby access to NEH.  Constitution Center is located adjacent to the L’Enfant VRE Station at 7th and C Streets, SW.

WALKING Constitution Center takes up an entire city block surrounded by D , 7th, E, and 6th Streets, SW.  It is located two blocks south of the National Mall.  The closest museums are the National Air and Space Museum, and the Hirshhorn Museum and Sculpture Garden

The main entrance is at 400 7th Street, SW. There is also an entrance from the L’Enfant Plaza Metrorail stop.

ACCESS TO THE NEH OFFICES NEH offices are located on the Constitution Center’s second and fourth floors.  Visitors should enter the building, proceed to the nearest guard’s desk, and the guard will call a member of the NEH staff to  come  and escort you to the correct offices.