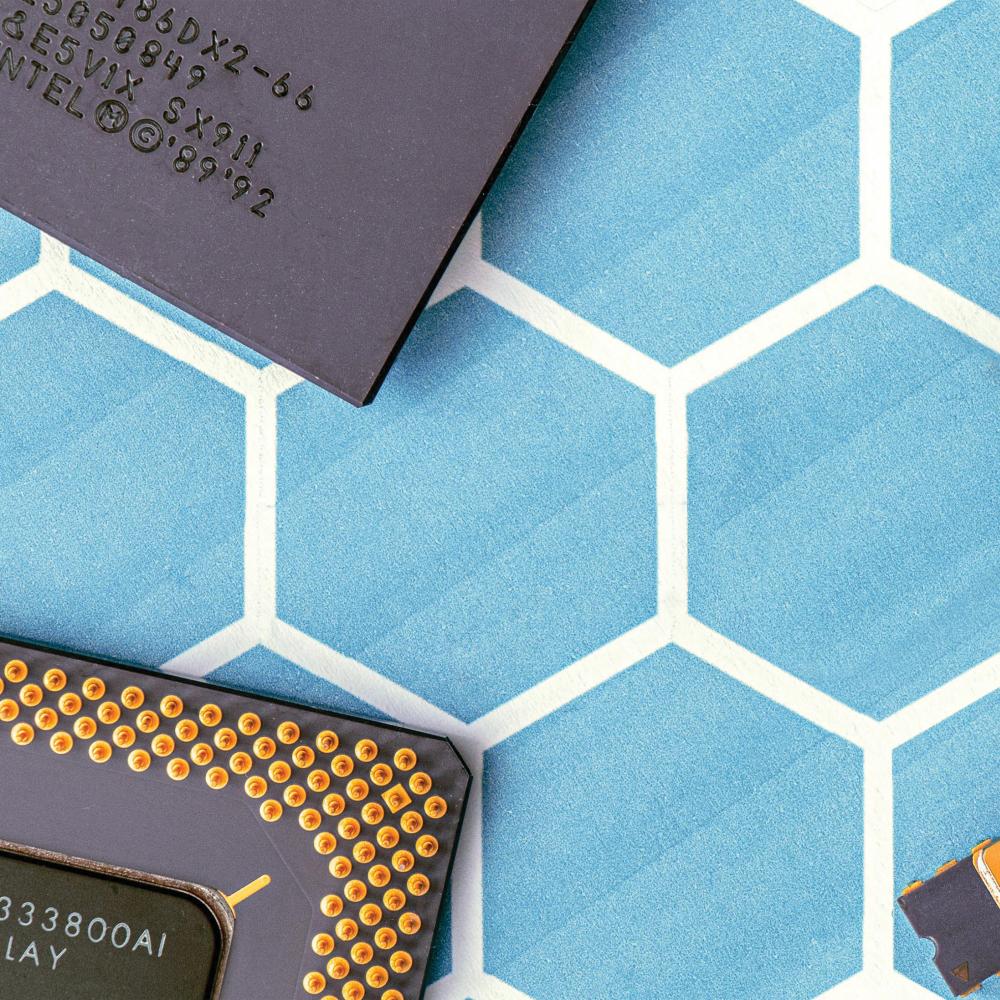 Funding projects that use computers to conduct humanities research was part of the NEH mission from the very beginning. Fifty years ago, NEH grants supported scholars using punch cards and statistical methods to create compendiums and answer literary questions. But another 40 years would pass before the Endowment created an office devoted to fostering the marriage between technology and the humanities. All it took was the Internet.

As the World Wide Web went from a curiosity to a network delivering information to homes and classrooms, humanities scholars began to see opportunities. Documents, data, text, images, and audio previously available only in person or on floppy disks or tapes could now be posted online, presenting new avenues for teaching and research. As the field known as “digital humanities” began to take shape, so did concerns about how to sustain it in the face of rapidly evolving technology.

NEH kept watch on these developments, while funding a wide range of digital humanities projects, even as some of its grant categories became less welcoming. Our Cultural Commonwealth, a 2006 report by the American Council on Learned Societies, provided a road map for the field’s growth. Written by digital humanities pioneers, the report recommended that funders such as NEH invest in technology infrastructure for the humanities, fund projects that foster open access, encourage digital scholarship, and support the creation of digital collections.

That same year, NEH hosted a mini-conference with leading scholars to brainstorm approaches. Along with endorsing the ideas articulated by the ACLS report, the discussions revealed the importance of NEH’s support for digital projects, particularly for younger scholars. Digital humanists regularly encountered skepticism about the value of their work. There was also a need to support experimentation, especially for projects in early development.

In 2008, NEH Chairman Bruce Cole gave the go-ahead to create the Office of Digital Humanities (ODH), with Brett Bobley serving as its director. Bobley, who had studied philosophy as an undergraduate, was the agency’s chief information officer (CIO). He had been advocating for the agency to concentrate its support for the digital humanities for a number of years. It might seem odd for the CIO to be spearheading a grant program, but, for Bobley, it made perfect sense. As CIO, his job is to help the agency think strategically about how technology supports NEH’s mission of bringing the humanities to the American people where they are. What better way than via the Internet and evolving digital technologies?

“The opening of the Office of Digital Humanities was a turning point for scholarship,” says Ed Ayers, a digital humanities pioneer and Tucker-Boatwright Professor of the Humanities at the University of Richmond. “By recognizing that digital work demanded different skills, contexts, and funding, the NEH accelerated creative work across a broad range of topics.” Ayers also notes that NEH’s recognition of the field and its imprimatur helped scholars signal to their institutions, donors, and tenure and promotion committees the significance of their work.

Taking a page from Silicon Valley, ODH bolstered the existing Start-Up Grant program, which was launched in 2006 as a test run for funding digital humanities projects. Awards, which now topped out at $50,000, supported basic research and encouraged cutting-edge approaches. “It was high risk, high reward,” says Bobley. “The risk was that an experimental project might not succeed, but the reward was that if it did succeed it could have a positive impact on the field.” The grants gave scholars the room they needed to experiment with new methods and to make tools tailored to humanities problems.

“So much of the funding and design impetus for digital tools comes from commercial interests—we see this very clearly in the swift evolution of the Web towards a purely commercial platform,” says Julia Flanders, director of the Digital Scholarship Group in the Northeastern University Library. “By deciding to fund digital humanities, the NEH established an important push in a different direction. It enabled academic digital projects to develop tools, methods, platforms, and working practices that are shaped by goals like information-sharing, longevity, respect for complexity, and social justice.”

Access and collaboration are fundamental to NEH-supported digital humanities projects. For example, Open Context, maintained by the Alexandria Archive Institute, serves as an open-access repository for primary field research in archaeological data. Making the data easy to access helps advance research and teaching, while also encouraging scholars to work across institutions and national boundaries. Mukurtu, an open-source platform, was built with indigenous communities to manage and share their digital cultural heritage in a way that respects their traditions.

The Digital Public Library of America provides a front porch to the digital collections of libraries across the country. By using its search box or one of its discovery tools, users can simultaneously search more than 20 million images, texts, audio, and video files held by hundreds of libraries and archives. The Humanities Open Book Program, a joint program with the Andrew W. Mellon Foundation, has spurred the digitization of 1,965 out-of-print humanities books and made them available to the public as free e-books.

California artist Jo Mora created murals and this 1930s menu for The Fable, a restaurant at the Hotel Drake-Wiltshire in San Francisco, California.

ODH support has also been key to developing digital crowdsourcing tools that let archives and libraries enlist assistance from “citizen scholars.” New York Public Library’spioneering What’s On the Menu? uses crowdsourcing to improve access to its collection of 45,000 menus. The typography and design of the menus make it difficult for scanning alone to create texts that can be searched. But when you enlist the help of foodies with a love of history and a willingness to do transcriptions, the collection becomes searchable down to the most exotic appetizer. Colored Conventions is using a similar strategy to illuminate a previously understudied aspect of nineteenth-century African-American political history. The project uses crowdsourcing to review and improve transcriptions of the minutes of meetings held by a network of prominent black businesses, churches, and labor leaders.

Audio files have always been tricky for archives and researchers. Even as formats evolved from reel-to-reel to cassette to digital, searching the files almost always required transcripts, which are labor-intensive to produce. With NEH support, Pop-Up Archivedeveloped a way to organize and archive audio files to make them searchable, discoverable, and reusable. Given the ubiquity of podcasts, it’s not surprising that Apple took notice and acquired the company. The open-source code, however, remains available on GitHub for any organization that wants to adapt it.

Scholars are also using spectral imaging to recover—and uncover—lost manuscript texts. The previously unreadable diary kept by David Livingstone while stranded in Africa’s interior became visible under spectral blue light, giving historians new insights into nineteenth-century British imperialism and the Arab slave trade. The technique developed by the Livingstone project has been replicated around the world, providing scholars with a new tool to unlock the secrets of hard-to-read manuscripts.

The digital humanities aren’t possible without technical knowledge. NEH-supported institutes give scholars a chance to learn digital humanities methods, both at beginner and advanced levels. They have helped create what Flanders calls “an expert generation” of digital humanists. Those institutes have also played a role in spreading the use of tools. The Institute for Enabling Geospatial Scholarship, hosted by the University of Virginia Library, spurred field-wide interest in using geographic information system (GIS) tools to map archival data. GIS is now being used to chart population changes, migration patterns, and the growth of infrastructure.

NEH has also prodded scholars to try new kinds of research. The High Performance Computing Program, offered in partnership with the Department of Energy (DOE), gave humanists time and training to use the computers at the National Energy Research Scientific Computing Center (NERSC) at Lawrence Berkeley National Laboratory. The Digging Into Data Challenge, which began in 2009, has encouraged researchers to work across disciplines and national boundaries to apply computational techniques tohumanities problems. There have been four “challenges” so far, with the most recent round, in 2016, featuring a partnership between 16 funding agencies from 11 countries.

“Collaboration is super important,” says Bobley of ODH’s past and current approach to grantmaking, both among scholars and funders. “We’re building the digital infrastructure that is necessary for humanities research, preservation, and public programs. But you never want to build it in a vacuum by yourself.”

Having funded 492 projects over ten years, Bobley and his team are looking forward to seeing what the next 10 years will bring. Already in the pipeline are projects using drones and virtual reality.

This article is available for unedited republication, free of charge, using the following credit: “Originally published as "A Decade of Digital" in the Spring 2018 issue of Humanities magazine, a publication of the National Endowment for the Humanities.” Please notify us @email if you are republishing it or have any questions