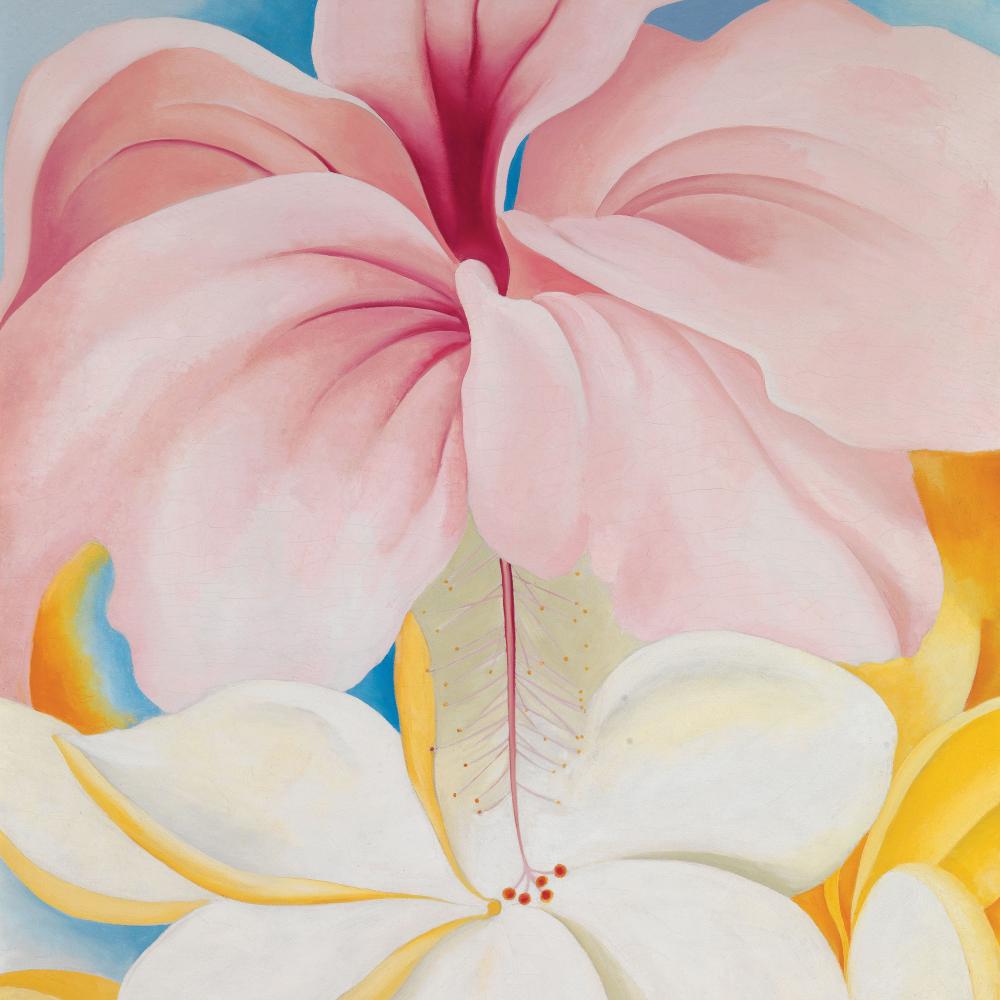 Flower shows don’t usually break new ground in art criticism. Yet that is just what the New York Botanical Garden’s current exhibition, “Georgia O’Keeffe: Visions of Hawai’i,” manages to do. The multimedia presentation offers a lush experience for visitors while also resurrecting a forgotten episode in the life of one of America’s best-known artists. 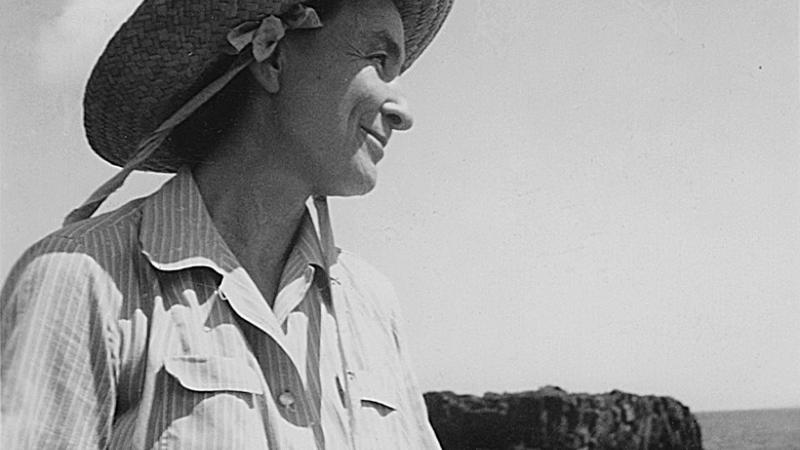 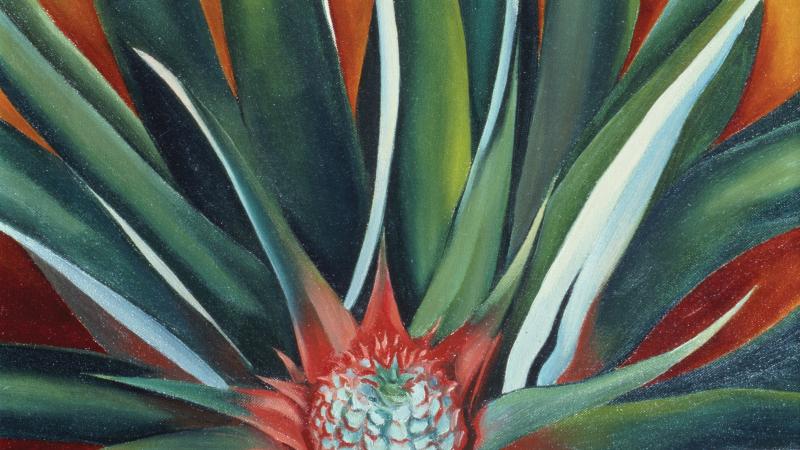 O’Keeffe is so closely associated with the American Southwest in the popular imagination that it is hard to envision her in anything other than the ascetic setting of New Mexico and its desert. Yet, in 1939, in the face of opposition from her husband and mentor Alfred Stieglitz, O’Keeffe accepted a commission from a New York advertising firm, N. W. Ayer & Son. The commission was to travel (all expenses paid) to the Hawaiian Islands and paint scenes for a pineapple juice promotional campaign. Stieglitz objected that serious artists didn’t accept commercial work; O’Keeffe, however, was won over by the glowing brochures about a still relatively remote tropical paradise.

In fact, when she finally arrived in Oahu in February of 1940 after a transcontinental train trip and an ocean voyage, O’Keeffe was transfixed from the moment she was greeted with a pair of white-blossomed leis. The artist had made her reputation in large part with the photographically cropped, close-up paintings of flowers she had been creating over the previous 14 years. In Honolulu she was overwhelmed by the way that new acquaintances and guests at parties plied her with blossoms.

“I wish you could see the flowers I have,” O’Keeffe wrote to Stieglitz. “Helen Richards gave me another enormous white chain of flowers—the host at dinner last night gave me a four strand chain of such sweet smelling buds last night—it fills the whole room. A man walked up to me at the party and handed me a pink camellia with a very large handsome bud—it is so pretty it seems impossible it is real—Mrs. Richards[’s] mother brought me the first gardenia she has had blooming this year to wear at the party—Then the large bunch of very large anth[u]rium—pink—with big calla lilies—I must get to painting soon.”

Indeed, it was through her art that O’Keeffe came to terms with this unfamiliar environment, and the paintings she created over the ensuing nine weeks chart the course of her visit. Twenty of these images, 19 paintings and one sketch, have been assembled for display in the Botanical Garden’s LuEsther T. Mertz Library Art Gallery, the first time that they have been seen together in New York since a show in 1940 at Stieglitz’s gallery.

Not surprisingly, perhaps, O’Keeffe began her Hawaiian painting with images of flowers that were in some sense already familiar to her. The white funnel of an angel’s trumpet (Brugmansia x candida) recalls the portraits of the closely related jimson weed (Datura stramonium) that O’Keeffe had painted in New Mexico, and the lotus flower she painted while in Honolulu was something she had known from aquatic gardens on the mainland.

Interestingly, neither of these flowers was native to Hawaii; nor, indeed, were any of the other blossoms O’Keeffe painted on this trip. This reflects the extent to which the indigenous vegetation of the islands had been overlaid with exotic flora, first with introductions by Polynesians upon their arrival in the fifth century, and much more rapidly after the arrival of Europeans in 1778. Pineapples, for example, which by 1939 covered thousands of acres and provided the pretext for O’Keeffe’s visit, had been brought to the island in 1813 by a Spanish adviser of King Kamehameha I.

Today, because of such human disturbance, the Hawaiian native flora and fauna are among the most at risk in the world. More than 100 of the 1,400-odd types of plants native to the islands have already gone extinct, and 366 more are officially listed as endangered or threatened. The Botanical Garden exhibition addresses the issue with a reprint in its catalog of “Losing Paradise,” an essay by pioneering botanists Otto and Isa Degener, who studied the Hawaiian flora for the New York Botanical Garden from 1935 into the 1980s. Likewise, the recreation of a Hawaiian landscape that the Botanical Garden produced in its conservatory, besides offering the opportunity to enjoy in the flesh the flowers that O’Keeffe painted, also addresses the potential dangers of such plants. A fixture of the gardens that O’Keeffe visited, jasmine (Jasminum fluminense), though beautiful and fragrant, is nonnative and invasive, and labeled as such in this show.

Where O’Keeffe reached a more authentic appreciation was in her fascination with Hawaiian geology, which preoccupied her during her visit to Maui, where she spent a little over two weeks. The rocky shore, marked by the jagged, fantastic shapes of the lava flows, clearly intrigued her. In the two paintings and a sketch of it, one can sense O’Keeffe clambering over it, exploring. One can hear the surf, the “holes . . . ,” she wrote to Stieglitz, “where it seems solid where the water comes up in spray—hissing and blowing.”

Painting on Maui could be problematical. O’Keeffe resurrected a habit she had developed in New Mexico, where a specially equipped car served as a mobile studio during field trips. On Maui the vehicle was a borrowed station wagon, whose back provided shelter during the frequent rainstorms. Guided by the twelve-year-old daughter of her hosts, O’Keeffe found her way to the precipitous Iao Valley. The paintings she created here of the valley’s misty, green shoulders and deep clefts threaded by silver waterfalls are as palpably sensuous and intrinsic to the place as anything she painted in the Southwest.

“When I first came to Maui,” she wrote Stieglitz, “I wrote you about the beautiful green valley—Well—it is a wonderful valley—I’ve been painting up it for three days and it is just too beautiful with its sheer green hills and waterfalls—I should say mountains—not hills—a winding road that really frightens me—big trucks have to stop and back up to get round the curves but even if I’m scared it is worth it—you drive about ten miles an hour—it is just a narrow shelf on the side of the sheer mountain walls.”

Besides the landscapes and flowers on canvas and under glass, this exhibition explores the culture of Hawaii and the art of Georgia O’Keeffe with a number of other media. There are continual showings of an original short film, Off in the Far Away Somewhere: Georgia O’Keeffe’s Letters from Hawai’i, which contains excerpts of the letters from this trip that O’Keeffe wrote to Stieglitz. It is narrated by Academy Award nominee and New York Botanical Garden trustee Sigourney Weaver. For the botanically inclined, there is “Flora Hawaiiensis: Plants of Hawai‘i,” an exhibit tracing the history of Hawaii’s flora from unusual native plants to those imported by the ancient Hawaiians, and the post-European-contact ornamental and agricultural plants that O’Keeffe painted. Also on display are archival images and documents highlighting New York Botanical Garden botanists who worked in the islands of the Pacific.

Photo caption
Mark Chai’s contemporary sculptures at the New York Botanical Garden were inspired by the plants Georgia O’Keeffe saw on her trip to Hawaii.

For amblers, there are installations around the garden grounds by contemporary Hawaiian-Chinese sculptor Mark Chai, inspired by the forms of the plants that O’Keeffe encountered while visiting Hawaii. A poetry tour, organized in partnership with the Poetry Society of America, explores the relationship between nature and people in the Hawaiian Islands. The tour highlights the work of contemporary poets in Hawaii, including former U.S. Poet Laureate W. S. Merwin. Performances of Hawaiian dance and crafts, such as lei-making, also provide insights into the cultural milieu that so strongly affected Georgia O’Keeffe.

Although her stay in the islands lasted just nine weeks, what O’Keeffe experienced there had a profound impact. “One sees new things rapidly everywhere when everything seems  new and different,” she wrote in a statement that accompanied the first showing of her Hawaiian paintings in New York the following year. “It has to become a part of one’s world,” she explained, “a part of what one has to speak with.” This new vocabulary surely influenced how the artist interpreted her familiar setting when she returned to the Southwest. Brought back to life now at the New York Botanical Garden, the visual vocabulary cannot fail to affect as well how the visitor will understand and appreciate the painting of Georgia O’Keeffe.

“Georgia O’Keeffe: Visions of Hawai‘i” is on exhibit at the New York Botanical Garden until October 28, 2018. The NYBG received an NEH grant of $250,000 to create the traveling exhibition and public programing that explores the historical and ecological context of the artist’s 1939 visit to the islands.

This article is available for unedited republication, free of charge, using the following credit: “Originally published as "Georgia O'Keeffe Paints Hawaii" in the Summer 2018 issue of Humanities magazine, a publication of the National Endowment for the Humanities.” Please notify us at @email if you are republishing it or have any questions. 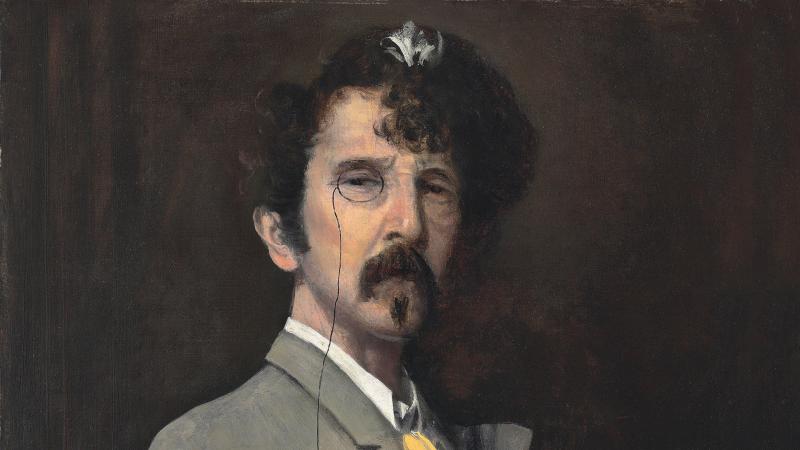 An artist sues his biggest critic.