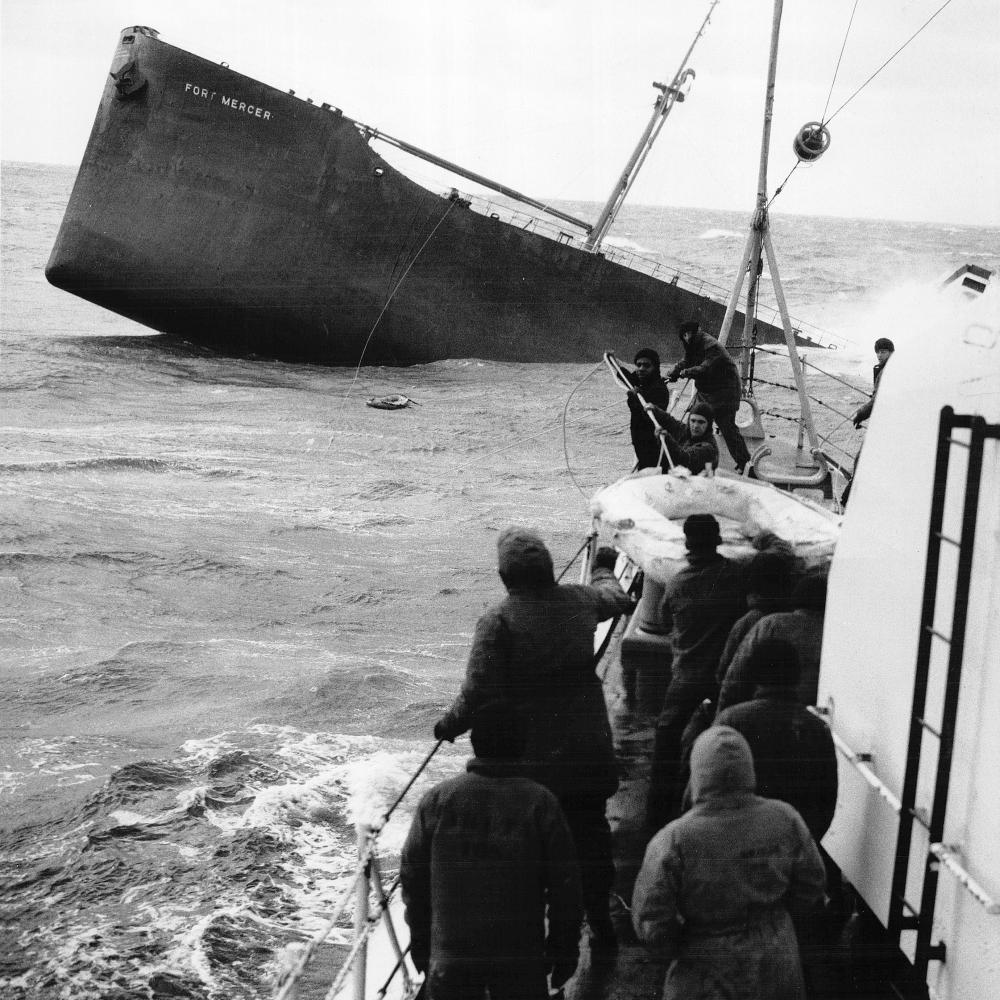 Crewmen of the U.S. Coast Guard Yakutat draw in a life raft with the last two survivors from the bow of the SS Fort Mercer. Minutes after the rescue, the broken bow of the ship heaved into the air and turned keel upward to sink into the sea.

On February 18, 1952, a fierce storm hammered the New England coast, generating waves that topped 70 feet. Just off Cape Cod, two 500-foot tankers were broken in half by the heavy seas.

The Coast Guard’s daring rescue of the men aboard those ships became the subject of The Finest Hours, a 2009 book written by Michael Tougias and Casey Sherman.

A recent Hollywood movie of the same name, however, focused solely on the rescue of 32 men from only one of the doomed tankers, the Pendleton. Tougias understands that movies often have to simplify more complex stories, and the Pendleton rescue, undertaken by a 36-foot Coast Guard lifeboat piloted by a brave young man named Bernie Webber, had all the drama a movie could hold—a stoic hero, a romance, a demanding boss, selfless action, and impossible odds. In the movie, Webber reminds his shipmates of the Coast Guard’s 1899 unofficial motto, “You have to go out, but you don’t have to come back.”

But the rest of the story is no less dramatic. In a talk in Lower Waterford in Vermont’s tiny Davies Memorial Library, Tougias narrated the rescue of the Fort Mercer, the other tanker that foundered in the storm. Tougias’s presentation, sponsored by the Vermont Humanities Speakers Bureau, connected audiences to the stories he’s collected from the people who experienced them. “Here, the control comes back to me again, so you’re telling the stories the way the guys lived it,” he explained.

The Fort Mercer, like the Pendleton, was a T2-SE-A1 tanker, built on the cheap during World War II. They were known for breaking in half. The Fort Mercer split apart at midday on February 18, while trying to ride out a gale. The captain and eight crew members were trapped on the bow of the ship, and 34 were on the stern.

The first attempt at rescuing the men on the bow of the Fort Mercer, which was listing badly in the heavy seas, failed miserably. One man was swept overboard, and four more leaped into the water in the hope of reaching lifeboats that extended from a Coast Guard cutter. All four drowned, and the cutter had to back off to await the dawn.

In daylight, the cutter launched a 26-foot wooden lifeboat, which rescued two of the four remaining men. But the seas smashed the lifeboat into the Mercer, forcing it to retreat. To save the final two men, the cutter’s crew fired a thin rope, called a messenger line, out of K-guns with depth charges toward the Mercer. Attached to the line was a rubber life raft tethered to the cutter by another rope. The men on the Mercer secured the messenger line to the crippled ship, but once they reached the raft they were unable to cut or untie the line still attached to the Mercer. The cutter backed away from the Mercer in the hope that the rope would tear on the other end, leaving the raft roped only to the cutter. It worked. Minutes later, while the rescued men lay nearly frozen in the bottom of the raft, the bow of the Fort Mercer reared up and sank.

“It went straight down like the Titanic, right before our eyes,” Tougias said, quoting one of the Coast Guardsmen.

Some of the “Coasties” had brought cameras with  them and Tougias displayed photographs showing the hypothermic sailors huddled in the bottom of the life raft, and the bow of the Fort Mercer keeling over.

The stern of the Fort Mercer was a different story. While many of the 34 men jumped from the crippled vessel onto the Coast Guard cutter Acushnet, 13 refused to leave. The stern still had electricity and plenty of food. When help arrived later in calm seas, the rescuers were welcomed onto the crippled ship to a breakfast of bacon and eggs.

In a way, the stories Tougias collects—he has written or cowritten 25 books—are made for an in-person account. Tougias said he doesn’t relish writing. “I love the research,” he said, in part because it brings him in contact with people like Bernie Webber, a hero who felt he was just doing his job. Already the author of six survival and rescue books, Tougias was on the lookout for a seventh when he came upon the rescue in a 1952 Coast Guard casualty report. “I was amazed that nobody had done a book about this, and it was considered the Coast Guard’s greatest rescue,” he said. He immediately set about contacting the Coast Guardsmen and survivors, who were in their eighties. “When I do the books,” he told his audience, “I feel like I’m learning along with the reader.” 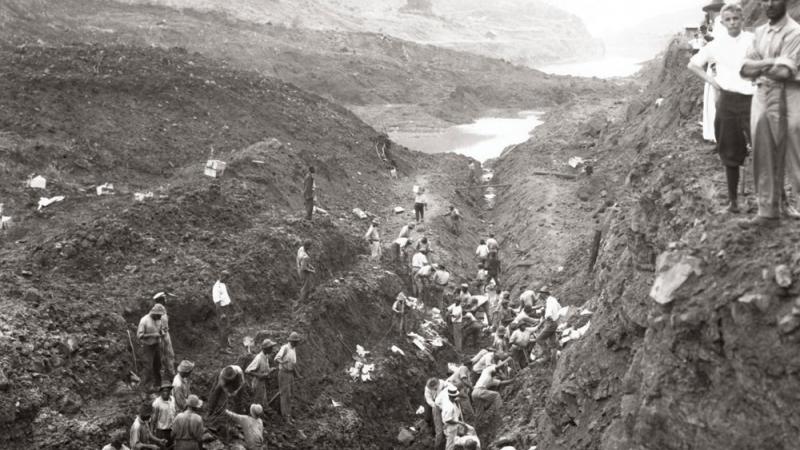