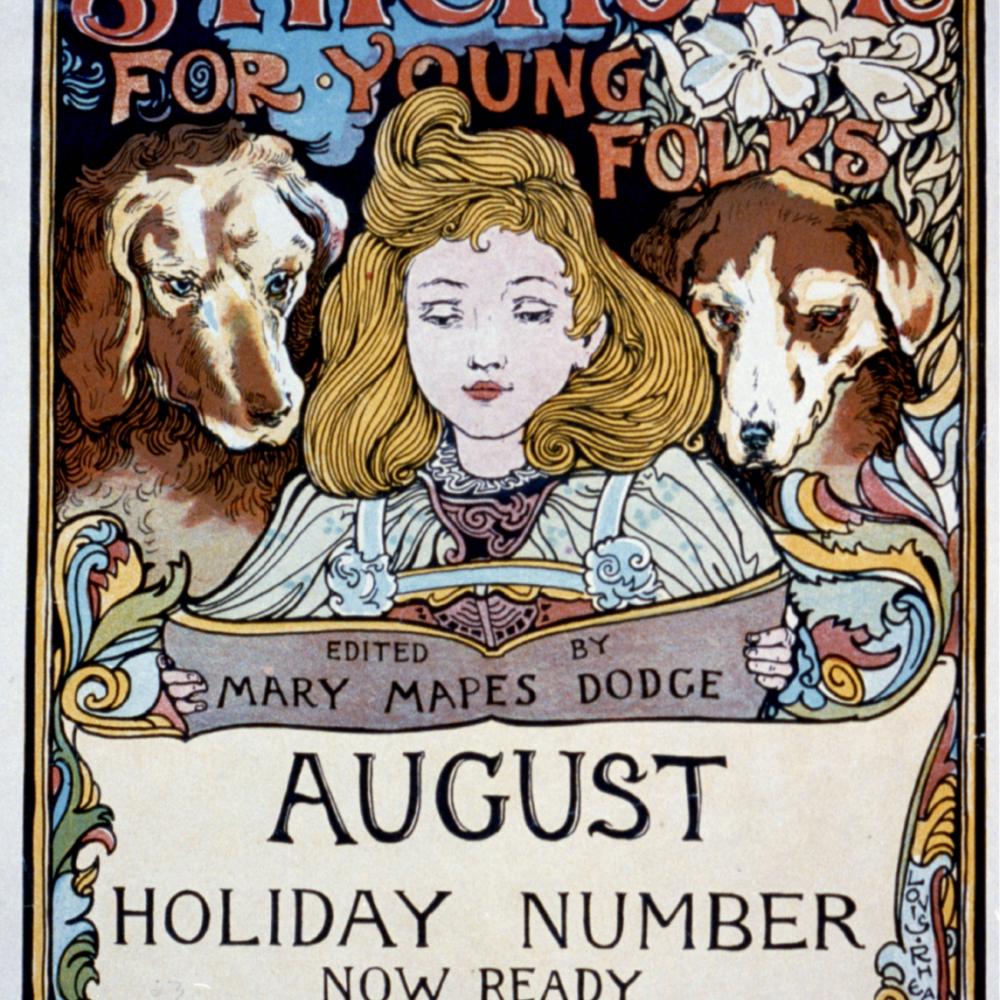 Before Eudora Welty gained international fame as one of the most acclaimed American fiction writers of the twentieth century, she tried her hand as a poet, gaining a national audience in the bargain. In 1923, when she was 14, Welty published “Once Upon a Time,” which opened like this:

“Once upon a time” – that sounds

A great long distance back from now,

But that is when our dear St. Nick

To our grandparents made its bow.

As verse goes, maybe it wasn’t yet the kind of literary performance that would, in later years, land Welty the Pulitzer Prize. Even so, the management of the magazine that published Welty’s simple rhyme was bound to be charmed. The “St. Nick” of her poem was St. Nicholas magazine, a journal for youngsters published between 1873 and 1940. The magazine offered readers membership in its St. Nicholas League, with small cash prizes and award badges given to aspiring artists and scribes whose submissions of drawings, photography, and writing were accepted for publication.

Two years after her St. Nicholas debut, Welty’s second poem for the magazine, “In the Twilight,” won the League’s highest honor, a gold badge. Although penned by a teen, it displayed a precocious sense of the fleetingness of time:

The daylight in glory is dying away;

The sun nears the beckoning portals of night,

And leaves to the skies his long, ling’ring light . . .

“There is no doubt about it, the fierce desire to write and paint that burns in our land today, the incredible amount of writing and painting that still goes on in the face of heavy odds, are directly traceable to the St. Nicholas magazine,” White wrote in a 1934 remembrance of the journal in the New Yorker.

For White, a shy boy who had long been interested in a menagerie of creatures that included everything from pigeons to polliwogs, the subject was a natural. When White was 14, his St. Nicholas essay about his dog Beppo’s heroic standoff with a herd of steers won a gold badge. An earlier White piece, also about a dog, had won a silver badge.

“We were an industrious and fiendishly competitive band of tots,” White would recall years later, “and if some of us, in the intervening years of careless living, have lost or mislaid our silver badge, we still remember the day it came in the mail: the intensity of victory, the sweetness of young fame. . . .”

White’s wife, New Yorker fiction editor Katharine White, had gotten a silver badge from St. Nicholas, too. The magazine even drew young readers from across the Atlantic, including a little English girl, Vita Sackville-West, who would later earn fame as a poet, novelist, garden writer, and intimate of Virginia Woolf. She contributed to St. Nicholas a history of her family’s ancestral estate. “There are 365 rooms in Knole, 52 staircases, and 7 courts,” she mentioned matter-of-factly. “A priest’s cell was found this year.”

When White, the subject of a 2014 Humanities essay, picked up a copy of St. Nicholas in 1934 for old times’ sake, he found that his cherished childhood companion had changed its format—the first intimation that the St. Nicholas he had known was now just a memory. With the arrival of World War II, the magazine ceased publication.

White would go on to receive a Pulitzer Prize special citation for letters and the Presidential Medal of Freedom. But nothing would quite match the thrill of his silver and gold badges from St. Nicholas.

“The League is still our white plume,” he wrote in 1934. “We graduates know what it was like to wear it. These later, slight victories, such as they are, fail to make the heart pound.”

NEH has funded several projects related to Eudora Welty, including a challenge grant to endow educational programming at the Eudora Welty House in Jackson, Mississippi, and programs for college and university faculty and high school teachers. Welty’s civil rights involvement was one of many topics explored in 2013 in “One Place, One Time: Jackson, Mississippi, 1963,” an NEH Landmarks of American History and Culture workshop for high school teachers. Welty was a recipient of the NEH Charles Frankel Prize in 1992 and the subject of a 2014 Humanities profile. NEH has supported numerous projects relating to children’s literature and writers connected to the New Yorker, including James Thurber, E. B. White, and A. J. Liebling. Some of White’s essays have been collected in thematic volumes published by Library of America, which was started with the help of a major grant from NEH. White also appears, along with many other writers, in the correspondence files of Morris Leopold Ernst, a lawyer who cofounded the ACLU and whose papers are being curated with NEH support at the Harry Ransom Center at the University of Texas at Austin.