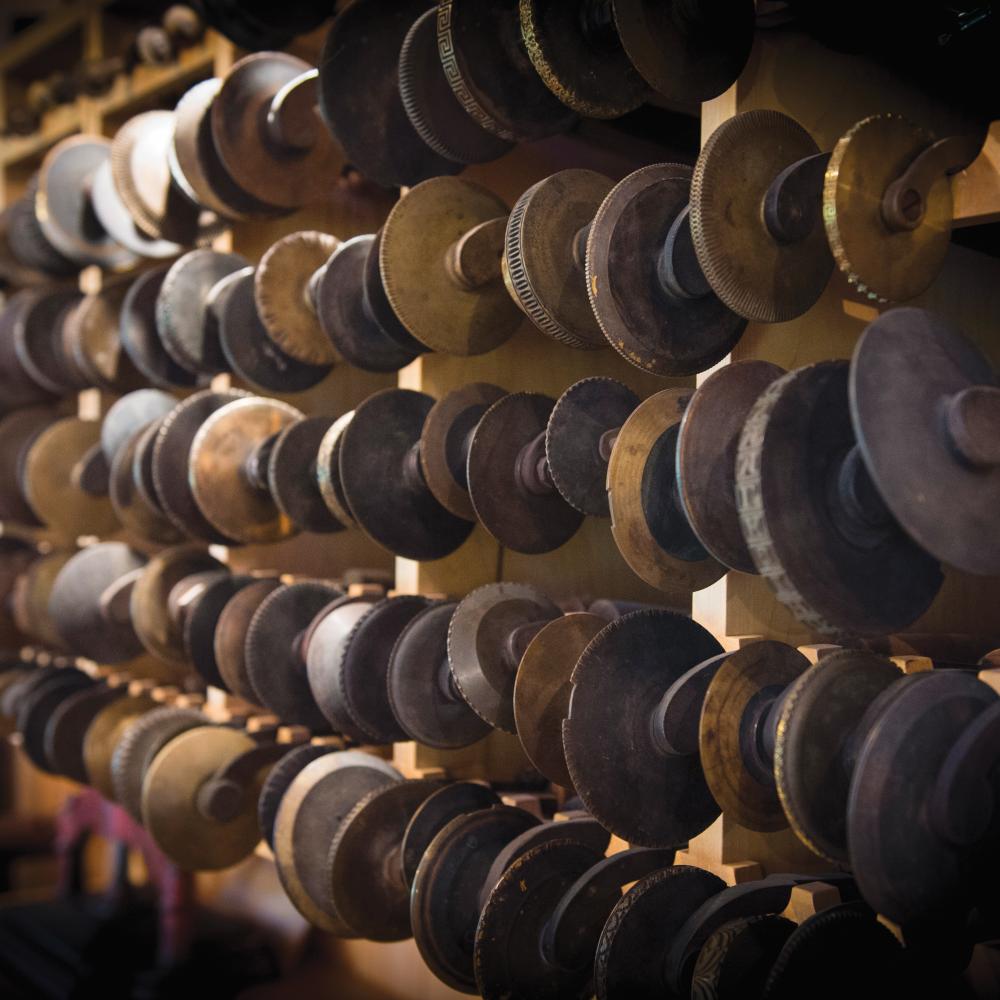 The fillet, a bookbinder’s tool, has been used since the Renaissance to inscribe fine lines in the covers of leather-bound books. The designs created by the fillet are then gilded. The ornamentation can be simple and geometric, as it was toward the close of the fifteenth century in Venice, where fine work was done in the shop of famed typographer Aldus Manutius. Before his death in 1515, Manutius befriended Jean Grolier, a Milanese treasurer and book collector, and created, at Grolier’s suggestion, ornamental binding with complicated interlacements. This style came to bear Grolier’s name. In North America, the name Grolier has come to be associated with the Grolier Club in midtown Manhattan, a bastion of antiquarian book collecting.

Many of the tools used by bookbinders in the United States were produced by skilled craftsmen in Philadelphia in the eighteenth and nineteenth centuries. The tools would often bear “makers’ marks,” which today help scholars identify the work of specific individuals. Bookbinders bought their tools from makers, and sometimes used several tools in combination to create the final effect.

Thanks to an NEH grant, the bookbindery at Historic Sugartown displays hundreds of the tools of twentieth-century bookbinder Fred Shihadeh. He studied bookbinding in Bremerhaven, Germany, following World War II, and plied his craft for decades in an atelier in Ardmore, Pennsylvania, near Philadelphia, repairing two to three hundred rare books a year for collectors, antiquarian booksellers, and libraries. Among his most notable accomplishments were bindings he repaired for a collection of prints by John Audubon, an original edition of the Federalist Papers, and broadsides announcing the Declaration of Independence.

“Some finishing tools were unique to particular binders,” said Ramon Townsend, a curator at Historic Sugartown. “In addition, defects in tools can be impressed into the leather, which can help trace a binding to an individual binder.”

Even though Shihadeh and his wife, Elke, amassed one of the largest collections of the tools of their trade, little is known about them beyond the work they produced. “We need to hunt down bookbinders who knew them to get their perspective so we can round out what we know,” says Heather Reiffer, executive director of Historic Sugartown.