Labor Day, the unofficial close of summer, is a good time to remember E. B. White, whose elegant good-bye to the season still draws readers 75 years after its publication.

White memorialized summer in “Once More to the Lake,” a 1941 meditation on the passage of time that has become among the most widely anthologized essays in the English language. Elwyn Brooks White (1899–1985)—Andy to his friends—is best known as the author of Charlotte’s Web and Stuart Little, children’s books inspired by his later years on a saltwater farm in Maine. White had lived in Manhattan, thriving as a writer for the New Yorker, but he had a midlife crisis of sorts shortly before World War II. Seeking a change in how he lived and wrote, he moved to Maine with his wife, Katharine, the New Yorker’s fiction editor, a transition chronicled in a 2014 Humanities article. The children’s books that grew from that experience are justly celebrated. But White also published sublimely expressed essays about his life as a father, farmer, and husband, of which “Once More to the Lake” is perhaps the most famous.

The premise is simple, or at least appears to be. “One summer, along about 1904,” he tells readers, “my father rented a camp on a lake in Maine and took us all there for the month of August . . . the vacation was a success, and from then on none of us ever thought there was any place in the world like that lake in Maine. We returned summer after summer—always on August 1st for one month.”

In the summer of 1941, as he turned 42, White returned to the same lake with his son, wondering if the magic could be repeated. He finds that despite the decades, much remains the same. But in recounting his experiences, White strikes a tone of elegy, as if his lake adventure is already receding into memory. His piece, which was published by Harper’s in August 1941, just as the season was drawing to a close, describes his Maine world:

Summertime, oh summertime, pattern of life indelible, the fade-proof lake, the woods unshatterable, the pasture with the sweetfern and the juniper forever and ever, summer without end; this was the background, and life along the shore was the design, the cottages with their infinite and tranquil design, their tiny docks with the flagpole and the American flag floating against the white clouds in the blue sky . . . and at the souvenir counters at the store the miniature birch-bark canoes and the post cards showing things looking a little better than they looked.

The last line of the passage is vintage White. He begins on a breath of nostalgia, but then he resists the urge to see things as we wish them to be, insisting that they instead be seen as they are.

That tension rests at the heart of White’s reflection on his return to the lake with his son. For much of the essay, living vicariously through his son, he tricks himself into thinking that he is his son, a grown man restored to boyhood. Without quite saying so—White had a genius for showing rather than telling—he hints that this confusion of identity is a symptom of our middle years, that period of life in which we often feel mentally as if we’re one age, although chronologically we’re another.

But in the final paragraph, as his son slips on some wet swim trunks, a flash of recognition returns White to reality. “As he buckled the swollen belt,” White tells readers, “suddenly my groin felt the chill of death.”

Although White usefully avoided adorning his essays with teachable moments, at least one lesson of “Once More to the Lake” is obvious. Our supply of summers is not infinite, which is why each one is worth savoring.

In 1951, when an apparently young reader named Marilyn Boyer wrote White to ask him what “Once More to the Lake” was about, White mentioned its autumnal theme of mortality.

NEH has supported numerous projects relating to children’s literature and writers connected to the New Yorker, including James Thurber, E. B. White, and A. J. Liebling. Some of White’s essays have been collected in thematic volumes published by Library of America, which was started with the help of a major grant from NEH. White also appears, along with many other writers, in the correspondence files of Morris Leopold Ernst, a lawyer who cofounded the ACLU and whose papers are being curated with NEH support at the Harry Ransom Center at the University of Texas at Austin. 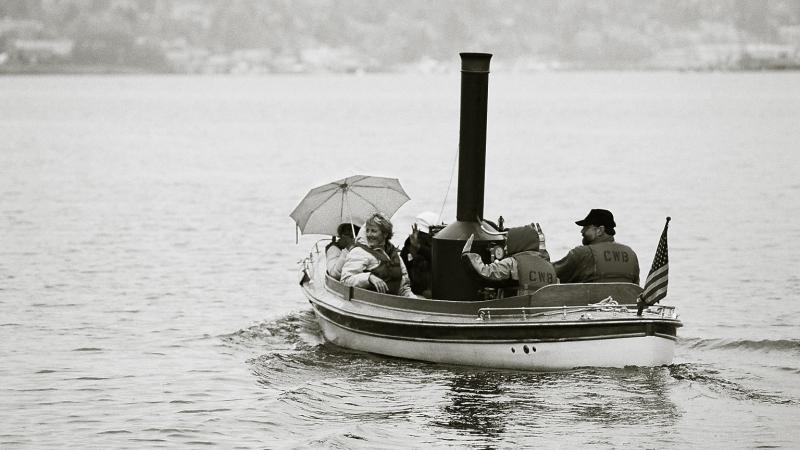