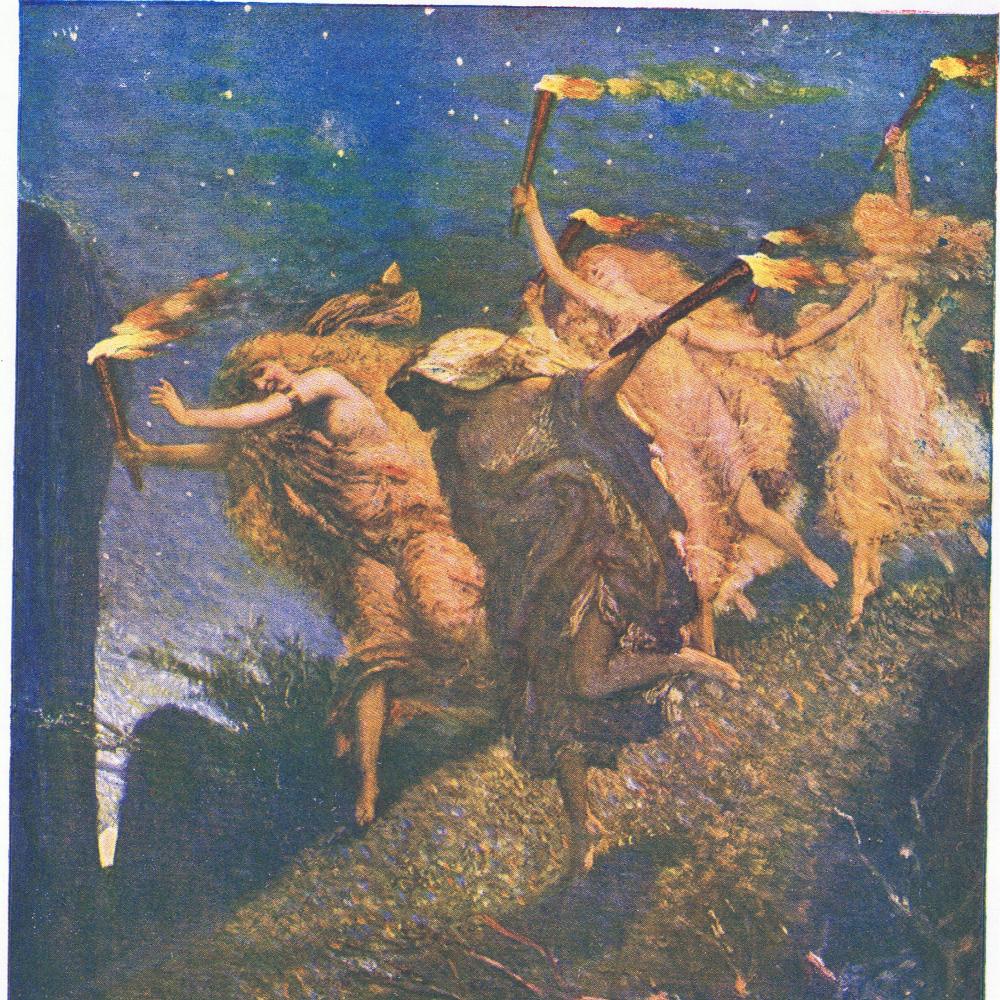 “The sudden gleams of light flashing over the obscure field bedazzled Goodman Brown,” or did they? Dream or fiendish reality? Nathaniel Hawthorne’s short story leaves the reader wondering.

First Walpurgis Night “Through the gloomy land and follow, in and out of each rocky hollow” (color litho), Price, Norman Mills (1877–1951) / private collection / Bridgeman Images

Halloween is a great time to read—or reread—Nathaniel Hawthorne’s “Young Goodman Brown,” one of the scariest stories in American literature. Lots of readers first delved into Hawthorne’s work because they had to, not because they wanted to. The Scarlet Letter, his 1850 novel about adultery, hypocrisy, and moral redemption in Puritan New England, has been required reading in high school classrooms for generations.

Like much of his fiction, including The House of the Seven Gables and the stories in Twice-Told Tales, The Scarlet Letter is also touched by the supernatural. In “Young Goodman Brown,” though, that sense of the otherworldly isn’t merely suggested, it’s central to the action. Hawthorne gives us a full-blown creep fest in this 1835 short story, full of wind, witchcraft, darkness, and the devil himself.

Not surprisingly, the action unfolds in Salem, Hawthorne’s birthplace, and the New England town where he spent much of his childhood and where his family had a long history. His connection with Salem, detailed in a 2004 Humanities article, was deep and profound. Hawthorne lived between 1804 and 1864, long after the infamous witch trials of Salem’s colonial era in the seventeenth century. But his ancestors, known as the Hathornes, were among the persecutors, and they later persecuted the Quakers, too. He felt guilt over that legacy, and his feelings inform “Young Goodman Brown,” in which Hawthorne’s forebears even make a masked cameo appearance. The reference—more about that later—proves subtle, part of Hawthorne’s gift for clever subtext.

In fact, the double meaning of the title “Young Goodman Brown” clues the reader that things are seldom as they seem. In a lively footnote to the story in The Norton Anthology of American Literature, we learn that “goodman” was a period term used to address a man of humble birth. But the reference to the title character also invites us to think of him, perhaps mistakenly, as a “good man.” And, by naming him Brown, a common surname, Hawthorne offers up the story’s peculiar protagonist as a kind of everyman, subtly suggesting that Brown’s sins might, in a broader sense, be our own.

Sin sits front and center in “Young Goodman Brown” as the story opens. In the Salem of old, young newlywed Brown leaves his beautiful wife, Faith—more wordplay, since Brown is leaving his religious faith, too—to take a secret evening trip into the woods, presumably to give his soul to Satan. While walking with a mysterious stranger who might be the Dark One in the flesh, Brown has second thoughts and asks to turn back. “My father never went into the woods on such an errand, nor his father before him,” Brown protests. “We have been a race of honest men and good Christians, since the days of the martyrs.”

But Brown’s companion quickly corrects him. “I have been as well acquainted with your family as with ever a one among the Puritans; and that’s no trifle to say,” he tells Brown. “I helped your grandfather, the constable, when he lashed the Quaker woman so smartly through the streets of Salem. And it was I that brought your father a pitch-pine knot, kindled at my own hearth, to set fire to an Indian village . . .”

As biographer Edwin Haviland Miller points out, those acts were actually attributed to Hawthorne’s ancestors, William and John Hathorne, in the family history. It’s Hawthorne’s way of acknowledging the evil in his clan’s past—and, by implication, inviting us to consider how our own history might stain us.

As Brown proceeds into the woods, he makes a startling discovery. He’s not alone, but part of a larger group of Satanists that includes the ostensibly pious pillars of Salem. Even a member of his own family has fallen into Lucifer’s trap. Shocked and chastened, Brown repents, but his change of heart brings him no peace, since his neighbors and loved ones have been revealed as spiritual monsters.

We’re left to wonder if Brown’s ordeal was all a dream, and that ambiguity advances a recurring Hawthorne theme—namely, the degree to which our moral judgments might be grounded in self-serving sanctimony and paranoia. But, maybe, as Hawthorne teasingly implies, our suspicions are completely justified, pointing to an entire town rotten to its core. It’s the chilling assertion of “The Lottery,” the 1948 short story by Shirley Jackson, who counted Hawthorne as an influence, as well as Salem’s Lot, horror novelist Stephen King’s 1975 best-seller.

Herman Melville “found ‘Young Goodman Brown’ as ‘deep as Dante,’ and Henry James termed it a ‘magnificent little romance,’” Miller notes. Melville’s sense of a story operating on multiple levels has attracted many other fans of “Young Goodman Brown.” Miller, echoing an assertion made by other Hawthorne scholars, speculates that a story so full of phallic imagery like snakes, brooms, and walking sticks must also be about one of Hawthorne’s enduring subjects, sex.

However it’s ultimately interpreted, the best reason to read “Young Goodman Brown” is its spine-tingling narrative, which is frightful fun from start to finish. But you’ll probably want to leave the light on after you’re done.

Nathaniel Hawthorne has been a subject of a variety of NEH funding, including a $50,400 Public Scholar grant for Paul Berman’s forthcoming book, American Exceptionalism and the Cult of Hawthorne, and a $36,887 Museums Planning grant to the Nathaniel Hawthorne Museum in Salem, Massachusetts. 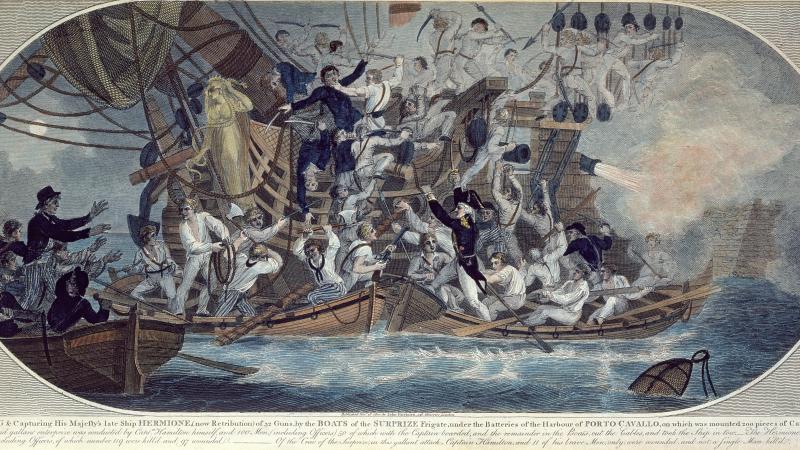 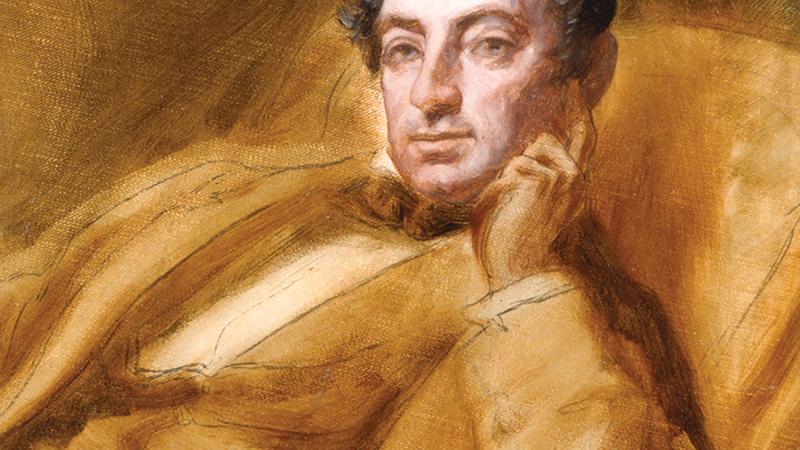 Washington Irving Was the Original City Slicker. Here's What Happened When He Went West.