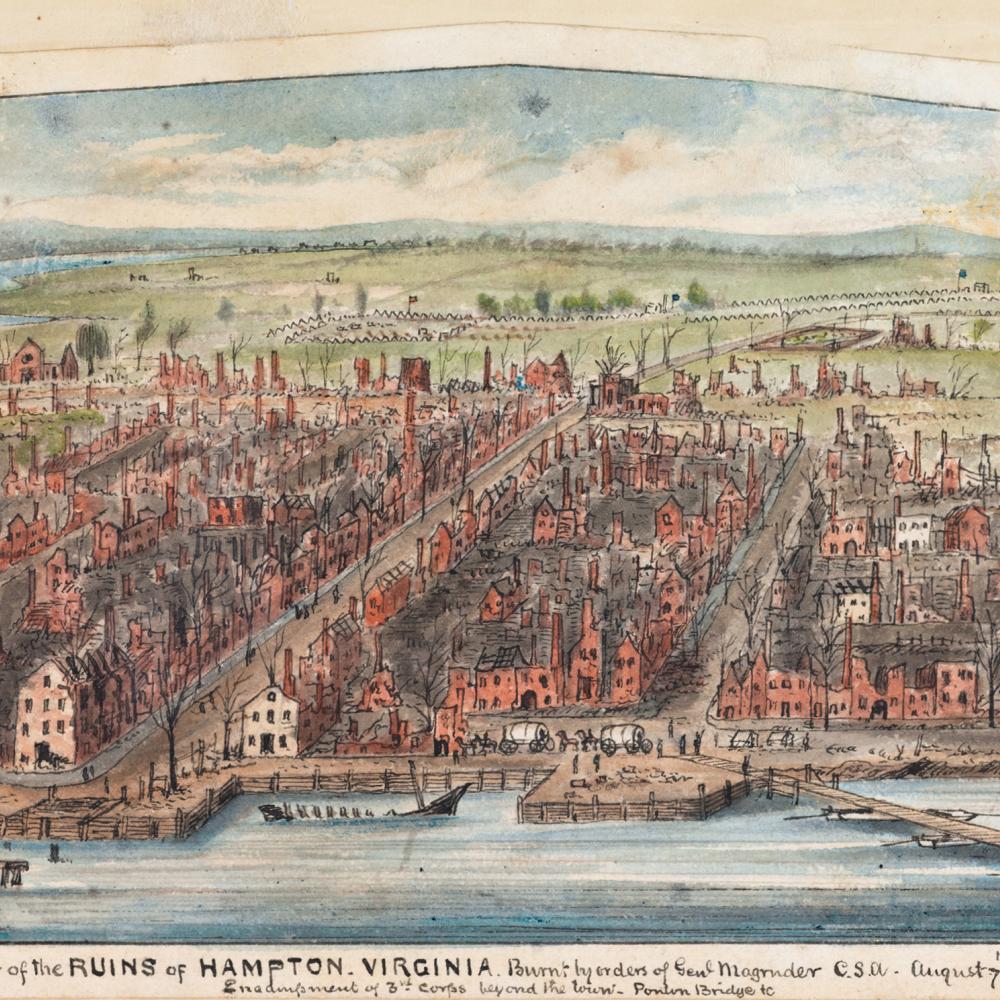 View of the ruins of Hampton, Virginia, Burnt by orders of General Magruder, C.S.A., August 7, 1861.

A descendant of American Loyalists and born in Nova Scotia in 1832, Robert Knox Sneden was a budding architect in New York City when the Civil War erupted. He had also studied landscape painting, and in the Union Army his drafting skills were put to work making maps. General George McClellan had already remarked upon the unreliability of the maps then in use, especially those of the Virginia Peninsula.

While still in Washington, D.C., with his regiment, Sneden purchased a spyglass for eight dollars. He also gathered information via hot air balloons. Both methods afforded him perspective and wide panoramas for his mapmaking and drawings.

Encamped in Northern Virginia, Sneden writes in his diary on September 29, 1861, “The 40th Regiment had a sham fight today which resulted in filling up the hospital with as many wounded and maimed men as if there had been a big skirmish with the enemy.” By spring and summer of 1862, however, Sneden was among the Union troops advancing into the Virginia Peninsula. He had little fear of moving up onto the front lines to make his sketches and sometimes attracted enemy fire. His paintings from this period depict the Federals marching into still-smoldering Yorktown, the leveled woods surrounding Fort Magruder, the campus of William and Mary College cluttered with ruined matériel, the denuded and fortified fields of Major General Joe Hooker’s headquarters at Fair Oaks, and a plantation along the James River going up in flames while steamers land troops. With stark objectivity, Sneden’s work reflects the deprivation and despair of the long conflict.

By the next year, Sneden fell into the hands of the Confederates. He was awakened one night at pistol point and taken to Richmond. Imprisoned in a converted tobacco warehouse, he found it harder to keep his diary.

In 1864, Sneden was sent by train with other captives to the notorious Andersonville prison in Georgia, where he continued painting. His clandestine watercolors done there record the hardships of daily life as well as the violence and theft among prisoners perpetrated by individuals and groups known as the “Raiders,” many of whom were hung within the prison in July 1864.

Sneden’s albums disappeared after the war and lay in a bank vault in Connecticut till 1994. The Virginia Historical Society purchased them, and for its NEH-supported exhibit “American Turning Point: The Civil War in Virginia” used some of Sneden’s paintings to interpret one of the major themes—the devastation of the Virginia landscape and the desolation of its population. Eye of the Storm, published by the Free Press in 2000, also helped shed light on Sneden’s diaries and watercolors, which are among some of the most detailed visual accounts of the war that exist.