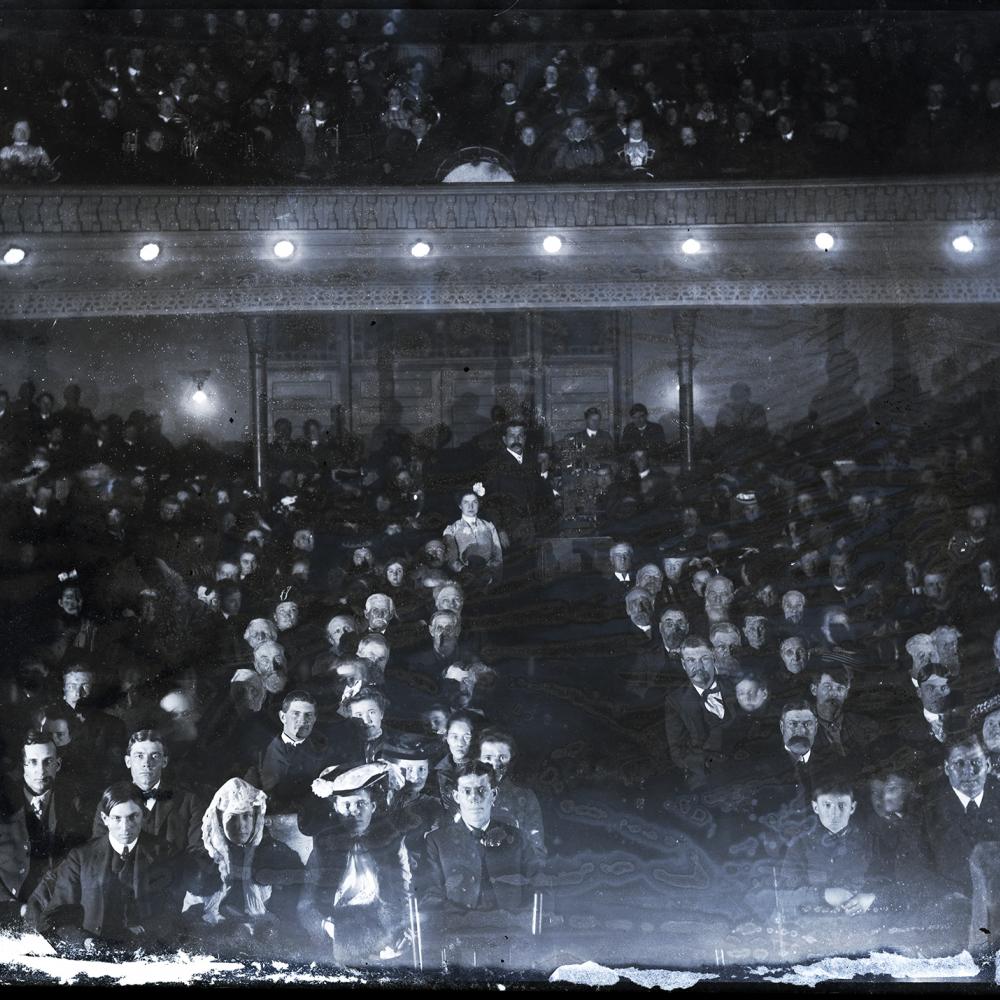 W. Frank Brinton was ahead of his time. In the latter half of the nineteenth century, he designed aircraft long before the Wright brothers took flight, built a solar-powered house, and introduced moving pictures to awestruck audiences in the Midwest. The moving picture collection that was discovered in a basement in Washington, Iowa, contains some of the earliest silent films ever made, including one by French film pioneer George Méliès that had been considered lost.

From 1895 until 1917, Brinton showed silent movies in small-town opera houses and tents, making up to $100 a day by charging 10, 15, or 25¢ per ticket. He started out alone and then his wife, Indiana, joined him in 1898. The first film in the U.S. was made in 1894; the earliest in Brinton’s collection dates from 1895. “When most people think of silent films, they think of Charlie Chaplin or the Keystone Kops,” says the collection’s archivist Michael Zahs. “But these films were made when Charlie Chaplin was in knee pants.”

Purchased from companies like Pathé, Edison, and Lumière, the hand-cranked films typically ran just a couple of minutes or even a few seconds. They featured fictional dramas of gold prospectors in the Old West, news clips of Teddy Roosevelt, and scenes of everyday life in foreign lands like Thailand, Egypt, and England.

The films were unsophisticated. Yet, they were magical to audiences who had never seen moving images. Scenes of a flowing river evoked astonishment, let alone special effects like flowers flying through the air into a woman’s arms (the filmmakers achieved this marvelous feat by filming the actress throwing away the flowers and then playing the scenes backward).

Following the introduction of full-length feature films and talkies, silent movies lost their appeal. With the passage of time and the fragile nature of early cellulose, some 90 percent of movies made before 1929 have been lost forever. For a while, it seemed the Brinton collection would suffer the same fate. Forgotten and ignored, it languished in Brinton’s executor’s basement—until 1981. Enter Michael Zahs, then a junior high history teacher whose school was near the old Brinton home.

By chance, Zahs ran into the man who was disposing of Brinton’s belongings. Knowing that Zahs was a local historian, the man offered to sell him three pickup-truck loads of dusty boxes, contents unknown, labeled “Brinton crap.” Knowing Brinton’s reputation as an eccentric, inventor, and collector, Zahs took the risk that he’d find good material. His purchase paid off. He discovered the boxes held hundreds of magic lantern slides (the precursors to movies) and ledgers, posters, and ticket stubs that document Brinton’s successful business—plus sixteen tins of dangerously decayed 35mm cellulose nitrate films marked “Explosive.”

With about ninety films converted to 16mm, Zahs showed them during occasional history talks around Iowa. He knew the collection was special, but it took thirty years before he could convince the rest of the world. After Zahs retired and joined the Humanities Iowa speakers bureau, another speaker realized the collection had films by Méliès, who had regained fame through the 2011 Oscar-winning movie Hugo by Martin Scorsese.

Now, with a $51,000 grant from the Washington County Riverboat Foundation and in partnership with the University of Iowa Special Collections and the MediaPreserve company in Pittsburgh, Pennsylvania, Humanities Iowa is helping preserve, restore, catalog, format, and digitize the collection.

Next spring, Zahs will take the reformatted films, complete with a musical score performed by Red Cedar Chamber Music, on tour to some of the Iowa venues originally visited by the Brintons. The premiere will be at the opera house in Ainsworth, Iowa, also one of the Brinton venues. Zahs says, “Nothing should be out of context. A big part of history is geography.”

More than a century after the flickering images first illuminated the darkness, Zahs knows that the audience won’t respond with the same wonder. But he also has confidence in the films’ timeless appeal, saying, “I enjoy when I show them to modern audiences and people laugh at the same things that made people laugh one hundred twenty years ago.”

Tina Owen is a freelance writer and editor in Iowa City, Iowa.