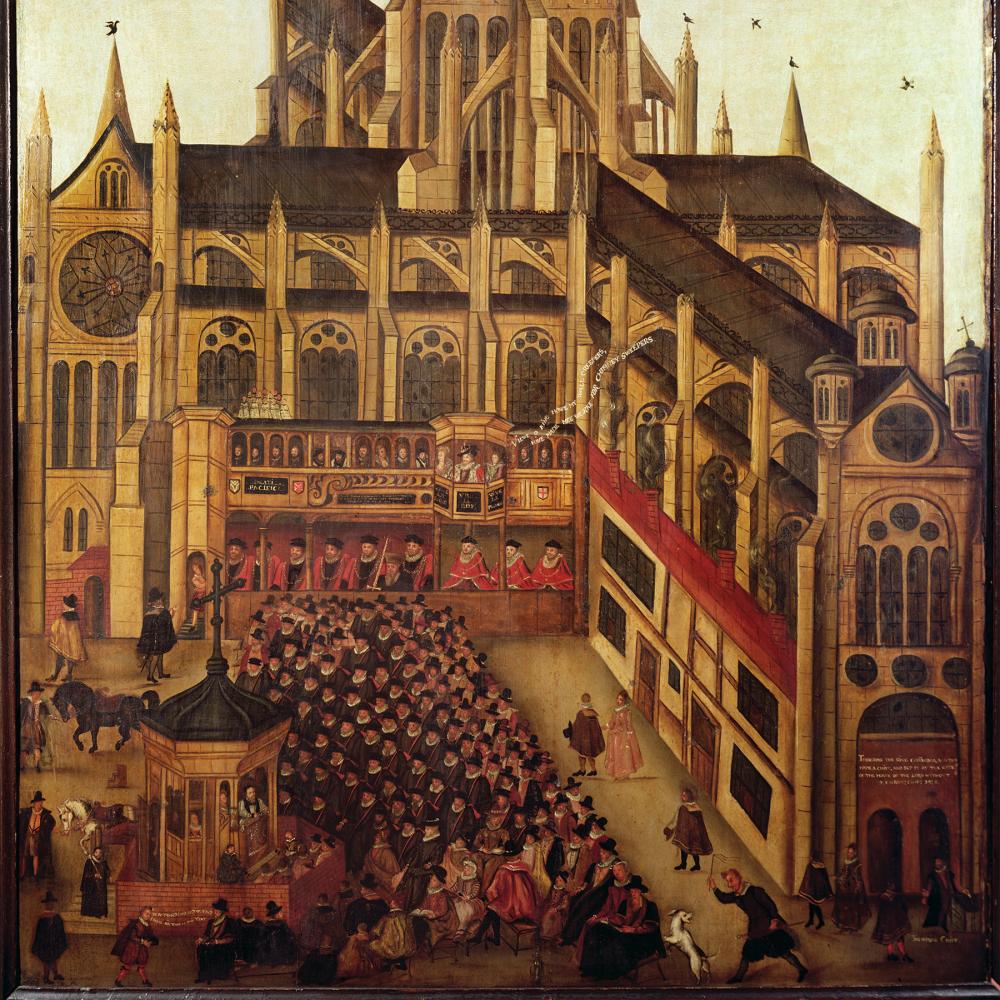 Although Old St. Paul’s Cathedral was destroyed in the Great Fire of 1666, archaeologists and other researchers were able to create models, using the structure’s foundations. John Gipkin’s 1616 painting of the cathedral and the adjoining churchyard provided details on the surfaces surrounding the preaching station, which created a stadium effect. Structures on the perimeter of the churchyard were mixed-use buildings that had bookshops on the ground floor.

What John Donne (1572–1631) may have sounded like, not while reciting, say, “A Valediction: Forbidding Mourning” or another of his metaphysical poems or sonnets, but in delivering a sermon from the preaching stand in the churchyard of St. Paul’s Cathedral, is the principal goal of the Virtual Paul’s Cross Project, headed up by John Wall at North Carolina State University. The sermons would have been two hours long and explained royal policies. St. Paul’s Cross, says Wall, was “where the general population of England came in contact with the government and the official state church.” Donne, poet, lawyer, and Anglican priest, was also dean of St. Paul’s Cathedral in 1622, when James I asked him to deliver the Gunpowder Day Sermon on November 5. Donne owed his position to James I, and it was the clergyman’s duty to help convey the crown’s position on both national politics and religious policies. How this may have been received by a crowd of as many as six thousand Londoners was what the NEH project set out to accomplish.

In his sermon Donne tried to reassure Britons, especially Puritans, that there would be no pulling back from gains Protestantism had made since the Reformation. Negotiations had been under way for eight years for what had become known as the Spanish Match—a proposed marriage between the son of James I and the daughter of the Spanish king. Donne in his sermon would have abided by the document Directions for Preachers, which limited “bitter invectives and indecent railing speeches against the persons of either Papists and Puritans.” This, according to the project’s website, “only aroused further anxieties about the religious allegiances of King James and the potential threat of a national conversion to Catholicism.” Reviewing the project in the Guardian, Liz Bury points out, “The Gunpowder Day Sermon was supposed to remind listeners that the king had been the primary target of the Guy Fawkes pro-Catholic plot seventeen years earlier.” The Guy Fawkes Plot was an effort by Catholic zealots to blow up Parliament during opening ceremonies in retaliation for what they viewed as intolerance toward the practice of Catholicism.

“One of the basic questions we had when we started this had to do with acoustics,” says Wall. “How many people can hear an unamplified human voice?” With the aid of acoustic simulation, Wall and his team dealt with technicalities such as signal-to-noise ratio. Ambient noise at St. Paul’s Churchyard would have included the fluttering of pigeons, a horse walking along the perimeter of the courtyard, and shuffling feet and mumbling from those in attendance. “We know the building was made of stone,” David Hill, another of Wall’s colleagues, reminds, “and we know where the openings were, we know where John Donne may have stood.” In fact, the courtyard created a stadium effect. At times, the sermon would have been difficult for everyone in the crowd to hear, but the project demonstrates that it would have been intelligible to many. To many others, however, the sermon was simply a social experience, even a performance.

A multidisciplinary effort was essential in recreating the experience of the sermon. The project’s website even provides an audio of an actor reading the sermon and what it would have sounded like from various vantage points. With the aid of acoustics, architectural drawings, archaeological studies, and John Gipkin’s 1616 painting of St. Paul’s churchyard, it was possible to understand the dynamics of the space where Donne delivered the sermon.

It’s not surprising that Popular Science took note of the project. In a review of the website, Colin Lecher writes, “For as well-preserved as Shakespeare’s writing is, there’s still plenty we don’t know about seventeenth-century London. . . . We know town square-style speeches were an important part of life, but what was it like actually attending one?” He quotes one response, from Wall: “The sermon had to be delivered at a measured pace to keep the speech from being garbled as the reverberating sounds overlapped.” Not Even the Past, a blog, points out that “Donne’s sermon was nothing more than background noise or a few snatched phrases to many ordinary Londoners. The Virtual Paul’s Cross Project elegantly reminds us that there is no one way to hear, see or understand a historical event. It all depends on where you are sitting.” 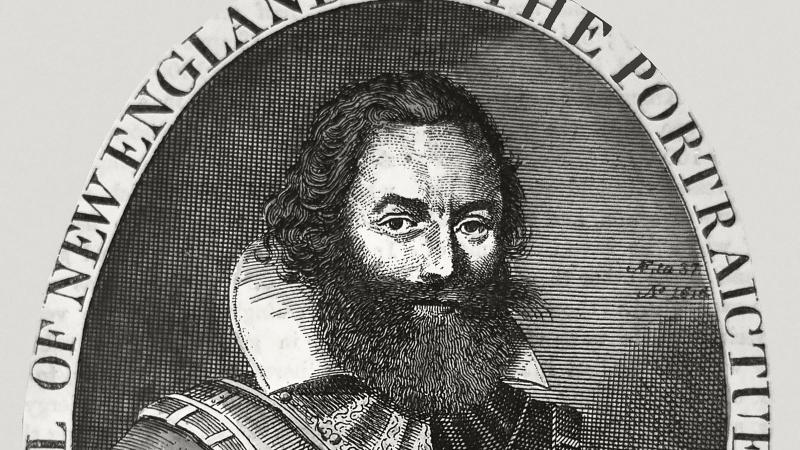 Smith's experiences as a pirate, mercenary, and Turkish slave prepare him to survive in the New World.