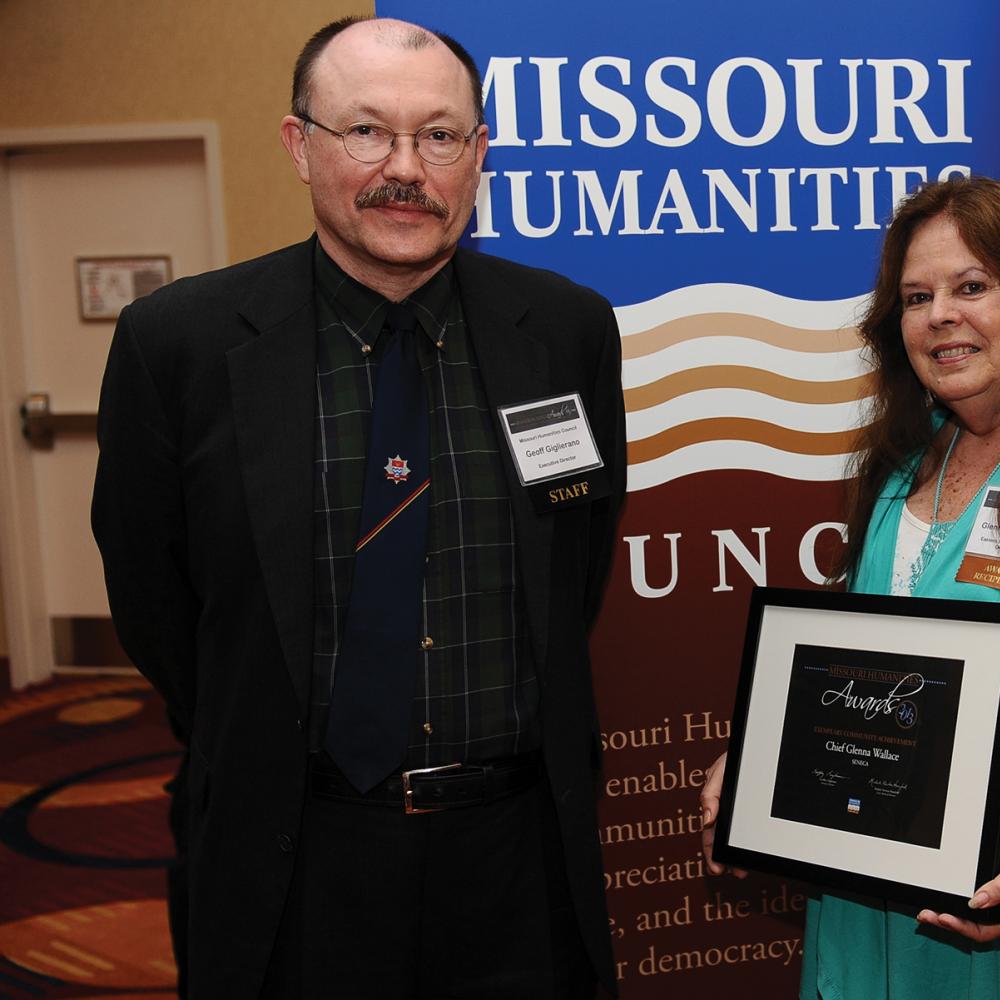 Geoff Giglierano stands with Chief Glenna Wallace, who received the Exemplary Community Achievement Award at the 2013 Missouri Humanities Awards ceremony in Jefferson City. The Missouri council honored the leader of the Eastern Shawnee Tribe of Oklahoma for her work as a professor and storyteller and for her leadership on projects that share the history of her tribe.

Geoff Giglierano was working as the director of the New York City Fire Museum on September 11, 2001, when more than three hundred firefighters lost their lives trying to rescue people in the World Trade Center.

“A number of us, friends and colleagues, used creative writing as a tool for working through things afterwards,” says Giglierano. It was an informal group and not all of the creative writing dealt directly with 9/11—Giglierano wrote science fiction—but it still helped them heal.

Nine years later, in 2010, Giglierano had just started as executive director of the Missouri Humanities Council, when the president of the St. Louis Writers Guild suggested they work together to offer creative writing classes to veterans. “I jumped out of my chair and said something profane,” Giglierano says with a laugh.

Together, in collaboration with the VA, they helped offer an ongoing series of workshops at Jefferson Barracks, a historic military post and VA medical facility in St. Louis. Taught by professional writers, the workshops focus on specific topics such as poetry, creative nonfiction, or journaling.

Then the partners organized a writing competition and worked with Southeast Missouri State University Press to put out Proud to Be: Writing by American Warriors. They solicited submissions from veterans around the nation, and a panel of judges that included Black Hawk Down author Mark Bowden, soldier-poet Brian Turner, andWILDCAT author William Trent Pancoast selected the pieces to be included in the book. This year, the MHC is putting out a second volume of Proud to Be and expanding its workshops beyond St. Louis.

“Since I’ve been here, there has been a shift toward an emphasis on partnerships and grassroots efforts,” says Giglierano. “Nothing is from the top down. We’re responding to what people want.”

In early 2011, John Deis, an IT specialist from Caldwell County, Missouri, called Giglierano. “He said, ‘You know the only resource we have up here—besides dirt—is our history,’” Giglierano recalls. Deis suggested the MHC help rural Missouri promote its history through a heritage tourism smart phone application. The multilayered app would include historical facts, games, and information on places to eat and stay. The first tour will be along northern Missouri’s Highway 36 from Hannibal, Mark Twain’s birthplace, to St. Joseph. For the project, the council is partnering with ESRI, a GPS/GIS software company, the University of Missouri–Columbia’s geography department, and the Missouri Highway 36-Heritage Alliance, a coalition of communities and institutions along the corridor.

Collaboration makes sense nowadays, argues Giglierano, because it helps Missouri’s council reach more people. “All the different disciplines of the humanities—history, literature, philosophy, ethics—constitute the collective conscience and memory of our society,” he says. “Think of an individual who has an impaired memory or no conscience. They’re not very functional. I think a society is the same way.”

For READ from the START, the MHC hands out children’s books to less affluent families and tells parents about the benefits of reading to their kids before they turn five. “Reading to kids at that very early stage gets kids excited about the power of stories and gets them to love books. That’s the foundation of the humanities,” Giglierano says.

Giglierano’s background is in museums. He started working in them when he was in college at the University of Cincinnati and wanted to escape his part-time job at a furniture-refinishing workshop. “It was like Dante’s Inferno,” he recalls.

While working in places like the Cincinnati Fire Museum or, later, with the Mashantucket Pequot Museum and Research Center, he learned the importance of stories.