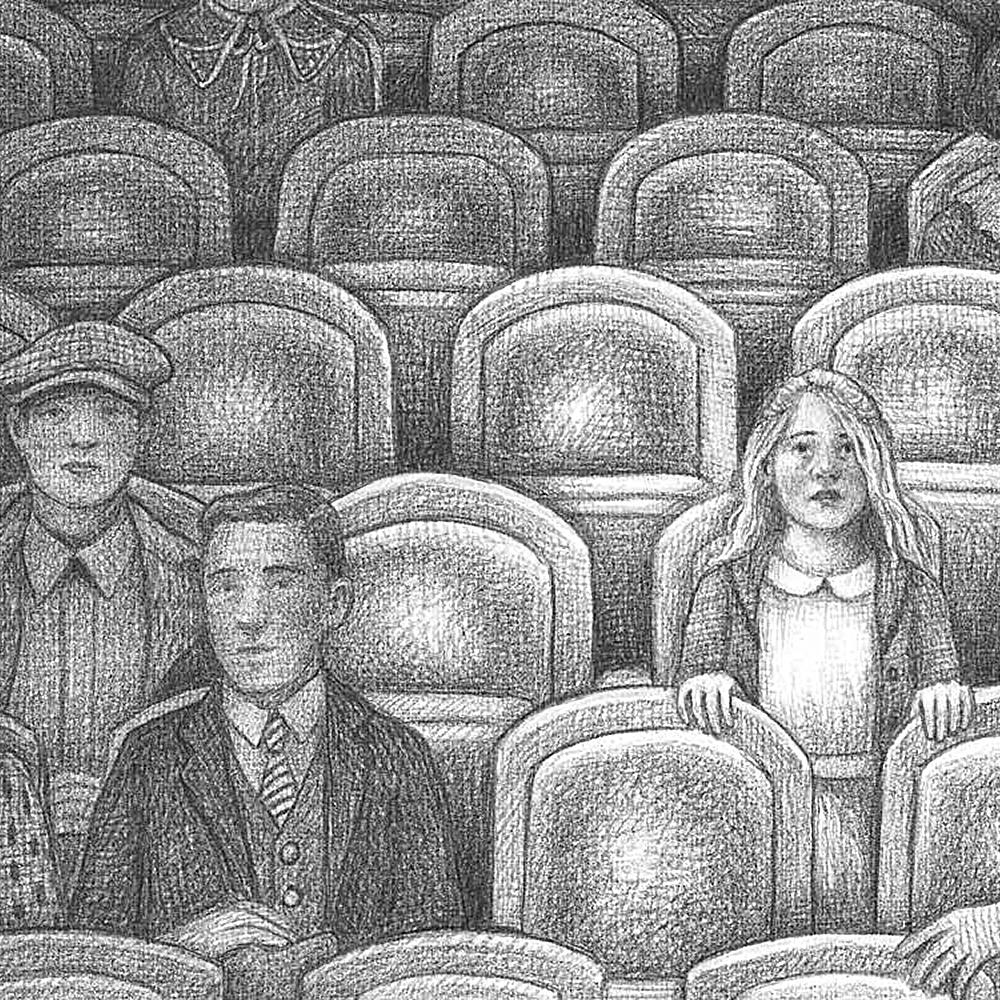 Rose in Wonderstruck, pictured before the introduction of sound.

One night while flipping through television channels, children’s book author Brian Selznick chanced upon Through Deaf Eyes, an award-winning PBS documentary that traces the history of Deaf culture and education in America. Selznick remembers that his “ears pricked up” as the documentary touched upon the end of the silent era in moviemaking. The introduction of sound, he learned, made movies suddenly impenetrable to the Deaf community. “It was a tragedy for them. As a hearing person, I hadn’t thought of it in that way before, just as a great advancement in technology.” 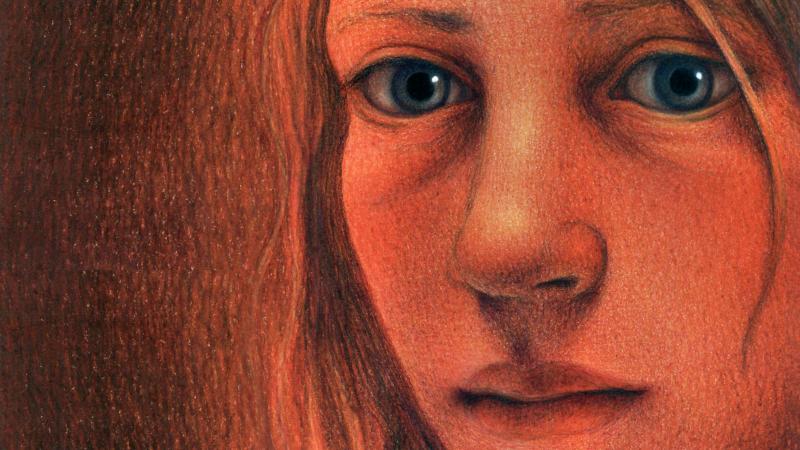 Detail of Rose in Wonderstruck. 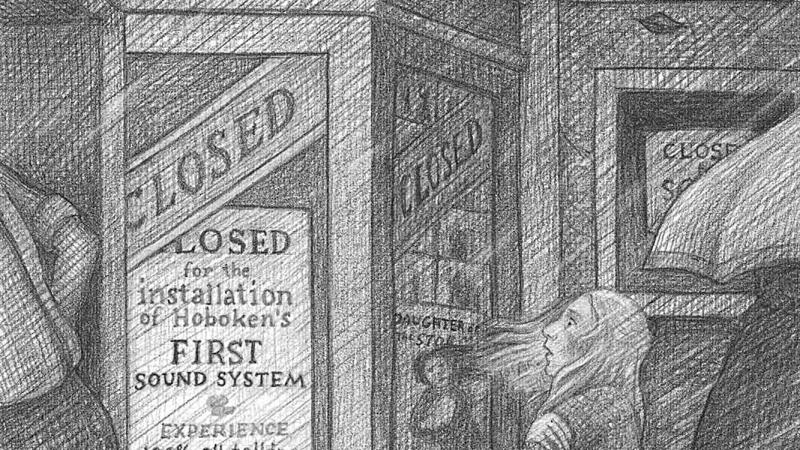 Rose pictured after the introduction of sound.

The NEH-supported film helped to inspire Selznick’s new book Wonderstruck, which tells the stories of Ben and Rose, children growing up deaf two generations apart and who each run away to—and one day by happenstance meet in—the island that enchants them both: Manhattan.

At the time Selznick saw the documentary, he was working on The Invention of Hugo Cabret, which won the Caldecott Medal in 2008 and has been turned into a movie directed by Martin Scorsese. Hugo lends itself to that flickering medium. Like Wonderstruck, it is highly visual, cinematic even. Selznick shifts between written text and illustrated action, depicting characters frame by frame in atmospheric pencil drawings—zooming in, panning out, and achieving many other effects. The story, set in 1920s Paris, is also dotted with references to silent movies.

Selznick, whose grandfather’s cousin was the Hollywood legend David O. Selznick, says that “films have been a part of my life for as long as I can remember.” After school, he would watch old monster movies in black and white and the silent versions of The Phantom of the Opera and The Hunchback of Notre Dame.

As he mulled over possibilities for his next book, Selznick knew that he wanted not simply to illustrate another written story. He wanted to tell two stories, one in words and the other entirely through images, but “I needed to find a story that made sense being told just in pictures.” He remembered a line from Through Deaf Eyes “about how the deaf people are the people of the eye and that sign language is a language you must see in order to understand.”

“Maybe,” he mused, “I could tell the story of a deaf person just with pictures. The way the story is told would then echo the way they live.” It also occurred to him that when hearing readers reach pictures, everything becomes quiet. “When you are reading in your head, you can hear the words; but at a picture, words shut off. I thought this could be beneficial in telling the story of someone who is deaf.” With all this in mind, he crafted the story line of Rose.

Rose was born deaf, and, in the 1920s, early on in the book, she is present for the change from silent films to talkies. She comes out of seeing a movie at her local theater in Hoboken, New Jersey, to find that the building has just been closed for sound installation. Devastated, she runs home in the driving rain as flashes of lightning tear through the sky. Her small silhouette rushes through page after page, till she climbs a tree up to her bedroom window.

At the same time, the other main character, Ben, whose story is told mostly in words, is struck by a lightning bolt traveling through a telephone wire that reaches the receiver resting against the one ear he can hear with. (He was calling the number he believed to be his father’s in New York City.) When Ben wakes up at the hospital in his hometown of Gunflint Lake, Michigan, he finds that he can’t hear a thing and must communicate—as does Rose—with pad and pencil; he is now deaf in both ears. The stories of Ben and Rose touch every so often in this way, with an image and its word converging, as if translating one another.

An experience Selznick makes common to both characters is one that he first heard voiced—or rather, signed—in Through Deaf Eyes. A young man born deaf to a hearing family felt as though he was not truly part of a community until he had gone to a college for the deaf and met others like him. Another woman in the documentary calls this the “Deaf meets Wow” moment.

“This idea of being part of a culture outside of the one you’re born into was really interesting to me,” says Selznick. “And it’s something a lot of people”—Deaf and hearing—“experience in their own way.” Selznick characterizes Rose’s parents as distant and stern; Ben’s loving mother has just died from a car accident when the book begins while Ben’s father is almost completely unknown to him.

Like Ben and Rose, most heroes and heroines of books for young adults struggle with growing up and finding a place in the world—and go on adventures away from misunderstanding or mean or absent parents to express their yearning, daring, and pluck. But being deaf adds another dimension to that common struggle and adventure, and Selznick knew that portraying it faithfully in Wonderstruck would take much research and care.

“Before seeing Through Deaf Eyes, I knew nothing about deafness or Deaf culture or Deaf education,” he says. “You can fact-check things about Deaf education and history—they are either right or wrong. What was harder was getting across the experience of being deaf, because that is very subjective and different for every person. Yet every deaf person can read a story or see a representation of a deaf person and usually can tell if it’s done accurately. They can tell.”

Which is why it was critical for Selznick to listen to the advice of his Deaf friends Carol Padden and Tom Humphries, experts in Deaf culture and linguistics who were among the fifty people interviewed in Through Deaf Eyes, on how to make his drafts more realistic to a deaf audience. “I couldn’t have done it without them,” Selznick stresses, especially as the couple’s own experiences mirrored those of his characters: Carol, like Rose, was born deaf, while Tom, like Ben, became deaf as a teen.

Lawrence Hott, who directed Through Deaf Eyes with his wife, Diane Garey, is amazed by how “many things in Wonderstruck fit in with the ethos of the film,” notably its stress on how deaf people are a people of the eye, no matter whether they write, sign, or read lips to communicate. He thinks Selznick deftly captures not only the “filmic nature of sign language” in his drawings—“the speed or slow motion, the positions, the sense of movement”—but also that critical “Deaf meets Wow” moment.

Selznick arranges for “two different kinds of deaf people, isolated at different times, [to] come together and find family in each other,” says Hott. “In a way, the metaphor is that the Deaf community is family.”

The provost of Galludet University, Stephen F. Weiner, who is Deaf, is also delighted to note the connection between the documentary and Wonderstruck, which Weiner calls a “seamless and compelling narrative showing the positives of being deaf.”

Wonderstruck, indeed, never hints that Ben and Rose are victims or unfortunate or “special” simply because they can’t hear. As one man in Through Deaf Eyes plainly puts it, “Being deaf is . . . just like being a man instead of a woman or being tall instead of short.” Still, the reality of Ben and Rose’s deafness is on nearly every written or drawn spread.

But the book is not solely about the Deaf experience. Wonderstruck is also about places one can fall in love with. It is, says Selznick, “a celebration of, a valentine to, New York City, set in one of the city’s worst periods, the summer of ‘77, when there was a blackout, a heat wave, a serial killer was on the loose, and there was economic collapse.” And it is a testament to the beauty of wonder. “There is importance,” he says, “in wonder, in standing in awe of something.” And one place where both hearing and deaf people can equally stand in awe is a museum.

“The only time my parents took us to the city”—Selznick grew up across the river from Manhattan in New Jersey—“was to see the Museum of Natural History, so I’ve spent my life going there and loving it,” he says. In that same museum, where years ago a friend took Selznick on a backstage tour, he places Ben and Rose. They are amazed and sometimes scared by what they find. Ben comes across a diorama in the Hall of North American Mammals, showing wolves that look just like the ones that plague his dreams, and Rose enters an exhibition about that Renaissance precursor to modern museums: cabinets of wonder, or wunderkammer, rooms filled with sundry curiosities arranged to tell a story and, of course, to flaunt one’s wealth and taste. The museum also figures as a place where they find another kind of wonder: friendship and even new family.

“Wonderstruck” has been one of Selznick’s favorite words ever since he came across it in an old thesaurus under the entry for “excited.” At the time, in 1990, he was looking for the right word to describe, in his first book, The Houdini Box, how audiences felt when they saw Houdini perform a trick. But magic, to Selznick, is not the stuff of fantasy.

“When I was making The Invention of Hugo Cabret, I wanted to make it magical without putting any magic in it,” he says. The same goes for Wonderstruck: “Everything that happens could actually happen in the real world,” he says. “They are unlikely, but not impossible.”

One thing that keeps the unlikely from turning unbelievable is Selznick’s insistence on authenticity. He consulted a specialist of subway signs to make sure he drew them correctly for the year 1977. This combination of research and imagination is also what has made Selznick’s portraits of Ben and Rose seem realistic, even to Deaf readers.

He has been able to meet many on his book tour. With the help of the interpreter who signs his talk, he has received their reactions first hand. The reviews are positive. They “tell me how accurate the book felt to them.”

Katherine Eastland is the associate editor of Commentary magazine and an illustrator.

In 2004, the National Endowment for the Humanities gave a $500,000 production grant to WETA to support the making of Through Deaf Eyes. In 1999, NEH supported the traveling exhibition “History Through Deaf Eyes,” developed at Gallaudet University, with a $100,000 grant. 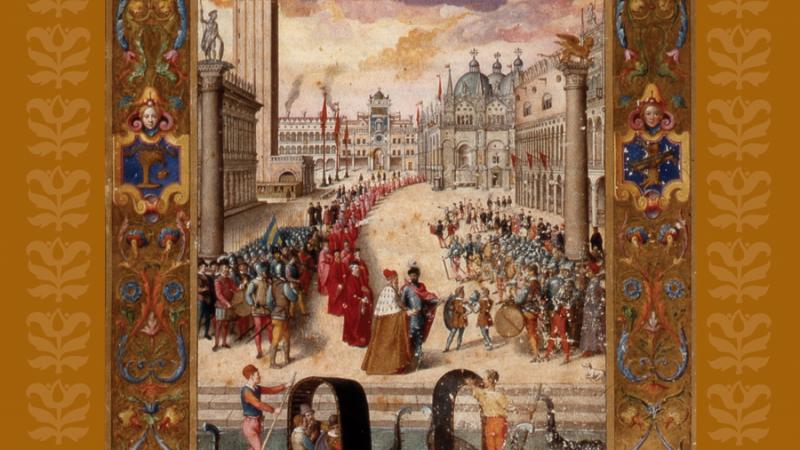