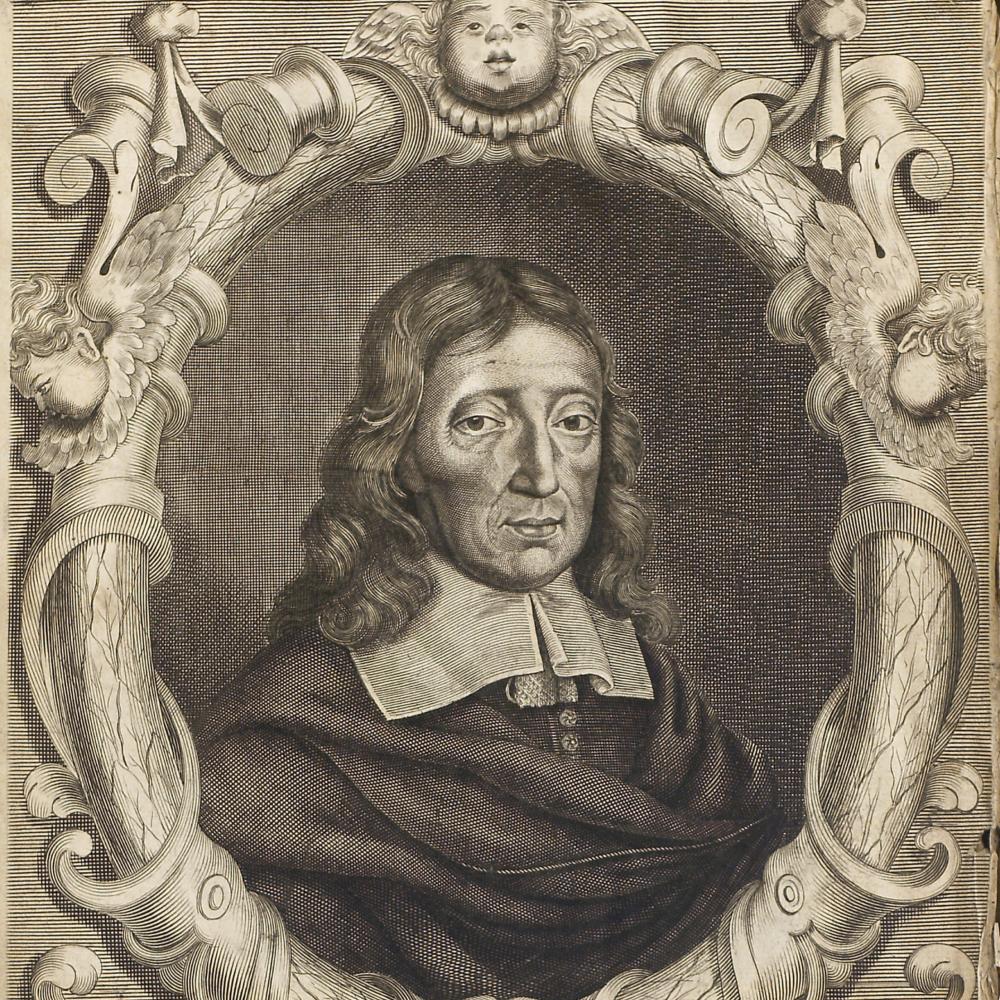 John Milton, from Paradise Lost: a Poem in Twelve Books.

London: Printed by Miles Flesher, from Richard Bently, at the Post-Office in Russell-street, and Jacob Tonson at the Judge’s-Head in Chancery-lane near Fleet-street, 1688; courtesy Rutgers University

Under the portrait frontispiece of the 1688 edition of Paradise Lost lies a powerful endorsement from England’s poet laureate, John Dryden: John Milton’s masterpiece had surpassed all former epics by combining the “loftiness of thought” of Homer with the “Majesty” of Virgil. Dryden’s words—much like those of Ben Jonson in the First Folio of Shakespeare—preface a magnificent edition that helped to secure Milton’s place in literary history.

Yet Milton’s work during his lifetime often assumed a less dignified and more ephemeral form, and his efforts to set his ideas in print were constantly thwarted by social opposition and governmental controls. Some of his writing, such as a radical “Digression” to The History of Britain, or the controversial work on theology, De Doctrina Christiana, never made it into print in his lifetime. A major exhibition at Rutgers University, entitled “Milton and the Cultures of Print: An Exhibition of Books, Manuscripts and Other Artifacts,” explores the various phases of Milton’s career, asking at each juncture what light the manuscript evidence sheds on Milton’s printed corpus.

The exhibition, supported by the New Jersey Council for the Humanities, showcases about 150 books, pamphlets, broadsides, manuscripts and other artifacts—including such things as a quill pen and some bronze medallions—from Rutgers’ large collection of Milton’s works and on loan from other libraries.

The exhibit begins with a case entitled “Milton’s Library.” The actual books from Milton’s library are rare indeed—only seven have been discovered. Most of them Milton acquired when he was young, and include items like the plays of Euripides, or a 1611 King James Bible that records the births and deaths of family members.

Despite this scant record, we are able to reconstruct a large number of the books that Milton had handy because his reading notebook, known as a commonplace book, has survived. Commonplace books were structured notebooks designed to organize excerpts from reading in a way that could be retrievable for ready use. Milton records hundreds of notes, usually providing a citation comprehensive enough for us to trace the exact edition he used, and how he used it. In many cases, such as his reading of Chaucer’s Canterbury Tales—on display in Milton’s magnificent 1602 edition—Milton provided only enough information in his notes to enable him to return to the volume should he need to quote a particular passage.

In a revealing indication of how Milton’s reading habits deviated from his contemporaries, this 1602 edition of Chaucer comes with printed markers—small pointing hands called “manicules”—that point to commonplaces in Chaucer’s writing worthy of extraction. A fashionable addition to printed books in early modern England, these marked commonplaces indicate what was valued among readers: the pithy aphorism or sentence, usually formulated in English poetry with a tightly endstopped couplet. Milton tellingly avoids all of the marked commonplaces in his Chaucer.

Milton’s first published poem appears prominently in the second folio of Shakespeare’s plays, printed in 1632. He styles his poem as an “Epitaph”—words inscribed on Shakespeare’s tomb. Most of Milton’s early poetry circulated in (or remained in) manuscript until the middle of the English Civil War, when he turned his energies away from poetry to write in support of the revolutionary efforts against the monarchy. But, in early 1646, he suddenly stopped producing polemical pamphlets—after writing some eleven works of prose—and put out an elegant volume of verse with the publisher Humphrey Moseley. Milton then retired from the print marketplace for a few years, and worked on several prose and poetic projects, including a history of Britain that would not be published until a few years before his death.

At the restoration of the English monarchy in 1660, Milton was thrown into prison and two of his books supporting the deposition of Charles I were recalled and burned. The large broadside Proclamation for Calling in, and Suppressing of Two Books By John Milton (13 August 1660) would have been plastered throughout London. Milton emerged from this scare to produce poetic masterpieces: Paradise Lost, on display in several different editions and forms, including a ten-book edition owned by William Wordsworth, Paradise Regained, and Samson Agonistes.

Although the now-blind poet was allowed to publish, his work was frequently subject to government scrutiny. In the case of The History of Britain (1670), some passages reportedly “could not pass the Hand of the Licencer.” One of these passages, a trenchant manuscript “Digression,” seems to have been reproduced in manuscript form and possibly supplied secretly with copies of the book. For the first time it is shown in facsimile outside of its home in the Houghton Library at Harvard. And visitors can read the twelve-page, quite legible manuscript themselves without any censorship, through a very twenty-first-century digital display.

Thomas Fulton is the author of Historical Milton: Manuscript, Print, and Political Culture in Revolutionary England.