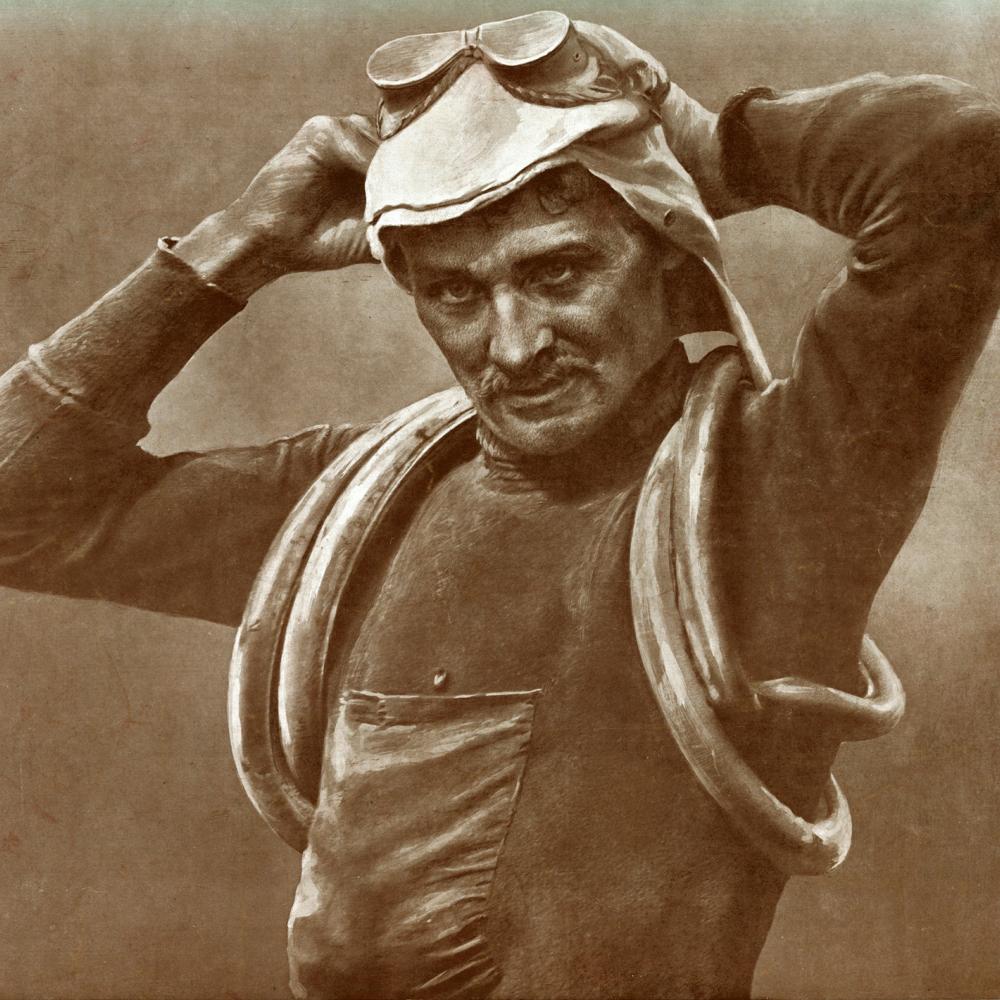 François Faber, left, dominated the 1909 Tour de France, winning six of fourteen stages. His virile mien served tour organizers' purposes well: He was the incarnation of the Giants of the Road legend exemplifying heroism and physical prowess. Faber, who was in fact Luxembourgian, was, indeed, heroic, having died while trying to save a comrade's life in No Man's Land during WWI.

Histories of bicycle racing often give in to hagiography, but historian Christopher S. Thompson, through NEH-supported research for his book The Tour de France (University of California, 2006), keeps pace with the sport without succumbing to veneration. In a passage deconstructing Gallic rationale and passion for arduous bicycle racing, Thompson acquaints readers with the Tour’s original impresario, Henri Desgrange; the sports paper of record for cycling, seemingly misnamed, L’Auto; and the era’s love affair with exercise sustained on two wheels.

The Tour de France was . . . created at a time when the French were investing the bicycle with their deepest hopes and fears as they digested recent traumas, experienced dramatic change, and confronted an uncertain future. Despite—or perhaps because of—contemporary misgivings about cycling, L’Auto’s editorial line never wavered. In a lengthy front-page article in 1913, Desgrange noted that the invention of the bicycle had modified society by contradicting retrograde theories that opposed physical exercise: a nation’s greatness was measured not only by its literary, artistic, and scientific achievements but also by its athletes and the “solidity of its children’s bodies.” The great sporting events of which the Tour was “the greatest crusade” had convinced “new crowds” of the importance of physical exercise as the foundation of a good life and future healthy generations. Today’s French youth were far more resolute, audacious, and willful than their predecessors of thirty years earlier (who, he did not need to remind his readers, had lost the Franco-Prussian War). This “new France,” aware of the dangers facing the nation, was impatient for combat. These were ambitious claims indeed, but the scale and difficulty of L’Auto’s great bicycle race appeared to justify them.