Is There A Portrait In Your Past?

When Helen Clay Frick began amassing material for an art reference library in the 1920s, she had a vision of documenting every work of art in the western world and making the visual record accessible to a community of art researchers and the public.  Her vision seems presciently 21st century, as today, images and catalog records from the Frick Collection’s Photoarchive are now digitally available to the public free of charge through an online interface -- the NY Art Resources Consortium online catalog, Arcade -- which unites the collections of the Frick Art Reference Library and the libraries of the Brooklyn Museum and The Museum of Modern Art and allows users to search through a unified interface.

The contents of the Photoarchive reveal an inquiring, curious, and encyclopedic mind: Helen Clay Frick wanted images not just of the paintings, sculpture, and architecture of the western canon, but of unpublished and little known works in private homes in the United States and Europe.  Traveling to Europe in 1920, she saw the devastation to cultural heritage from World War I, and began compiling before-and-after shots to document the damage.  She hired agents and employed professional photographers in Europe to document artwork in museums, private homes, and at auctions.  One of these, a portrait of the Drummond family at Cadland (England), painted by Johann Zoffany (1733-1810), was photographed at a sale at Christie’s in London in 1924 and was later destroyed during the London Blitz in 1940 (see image in gallery).  The Frick image is the only visual record of the painting.    Between 1922 and 1967, in an effort known as “the American campaigns,” her team of photographers discovered (and photographed) examples of fine art and folk art in private homes and small public institutions across the U.S.  Many of these were early American portraits, such as the anonymous mid-19th century painting of the Gilbert sisters, held by a descendant of the subjects (see image in gallery); most of them are unique and are not documented in any other source. 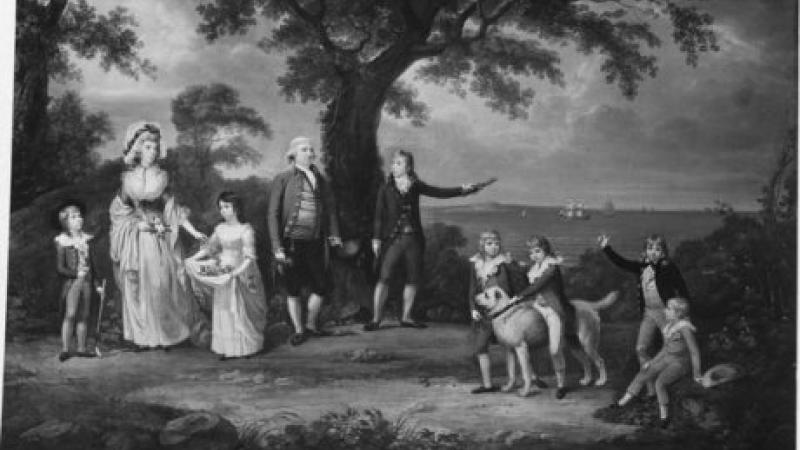 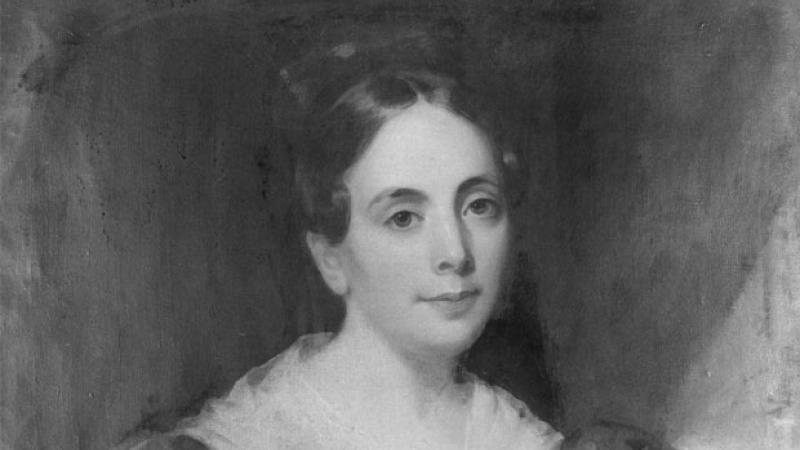 Two NEH awards through the Division of Preservation and Access's Humanities Collections and Reference Resources grant program have provided public access to this critical catalog:  The first, awarded in 2009, digitized 15,000 deteriorating negatives, most of them from the American campaigns.  A second award made in 2011 continues the work of the earlier award.  When complete, the project will have digitized and made freely available online all of the Library’s original large-format, black-and-white glass plate, acetate, and nitrate negatives (totaling approximately 30,000).

Information and images from U.S. and European auction and exhibit catalogs from the 18th century to the present were entered into the archive and are today an essential tool for art historians, students, and art market professionals undertaking provenance research.  The archive continues to be an important source to facilitate the restitution of lost or stolen works of art in international legal cases. 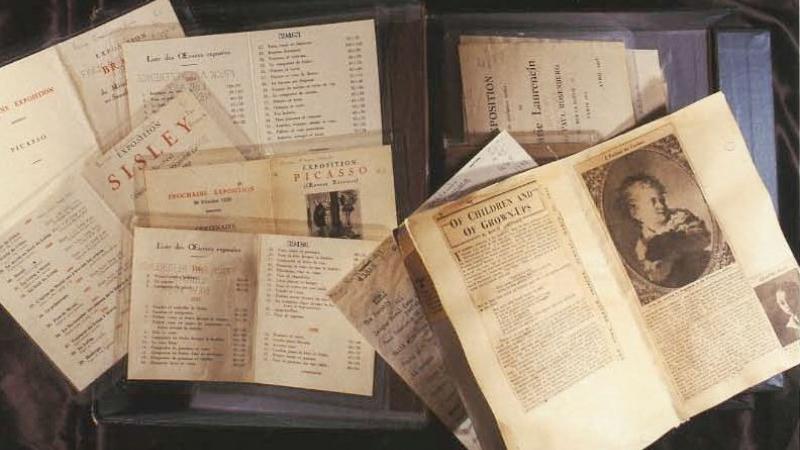 A selection of Paris exhibition pamphlets from the 1920s and 1930s along with an example of one of the Frick Art Reference Library’s “faux catalogues,” consisting of a typed checklist and newspaper reviews, for a 1943 exhibition at Wildenstein Gallery in New York. 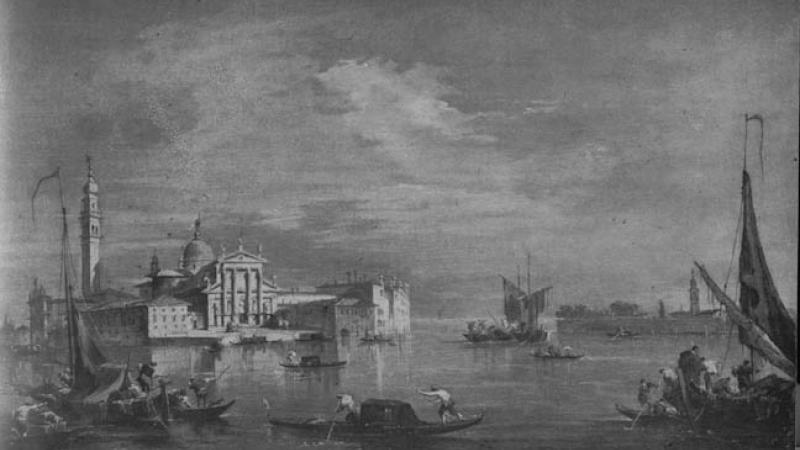 Photograph of Francesco Guardi’s painting, The Island of San Giorgio. The painting was photographed by A.C. Cooper (London) in the sale at Christie’s, London on June 26, 1925, lot 117.

For scholars who study social history or the history of collecting, the reference images are critical primary source material, since they reveal the tastes and habits of collectors, and the material culture of individuals, classes, and regions that may not be documented in any other source.  The archive is used by researchers and the interested public to chart changes in the condition of an artwork over time, or view a work of art that has since been lost, stolen, or destroyed.  It is also used to document the careers of little-known American artists, or fill in gaps in knowledge about a work of art’s long (and at times treacherous) journey from artist’s studio through dealer to private owner, thief, or museum exhibit.

It is perhaps the uses of the archive for online genealogical research that highlights the broad public appeal of the resource.   Imagine their surprise when a couple from Pennsylvania conducting genealogical research discovered through an online search the records for two Frick negatives of portraits of the wife’s ancestors.  The portraits of Mr. and Mrs. Philip Eisenbrey were painted by Jacob Eichholtz in 1828, and were photographed in 1959 by a staff photographer at an exhibition at the Pennsylvania Academy of the Fine Arts (see image in gallery).  The couple was able to fill in some blanks on their genealogical chart and the Frick was able to update the ownership records for the image. 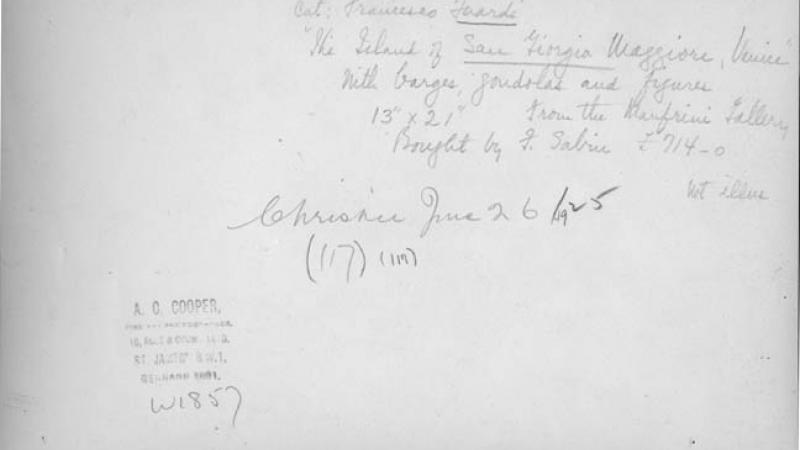 Photograph of back of Francesco Guardi’s painting, The Island of San Giorgio. The back of the painting was photographed by A.C. Cooper (London) in the sale at Christie’s, London on June 26, 1925, lot 117. 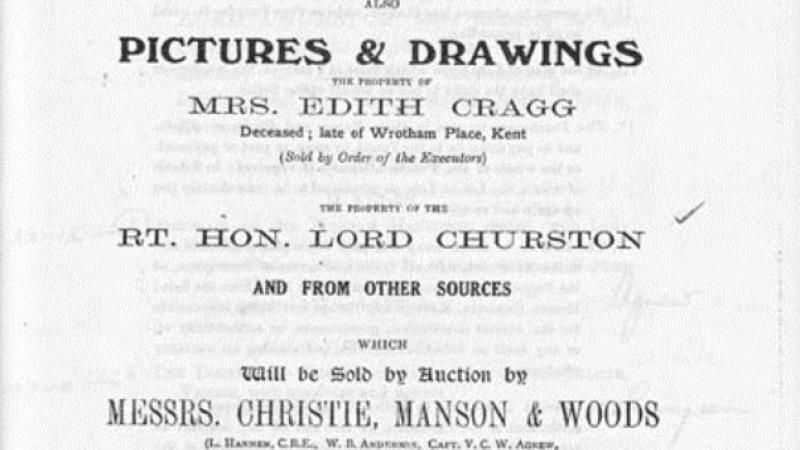 The Library is always updating its records and invites users with additional information about images and records to contribute to the archive.  See the Photoarchive (link no longer exists) for more information about how you can contribute to creating more accurate records for research.  If you are interested in the European agents who contributed photographs that helped build up the archive in its early years, see the list of agents here.

Additional coverage of the Frick Photoarchive:

Humanities: The Magazine of the National Endowment for the Humanities, "All the Art: The Records Division at the Frick," March/April 2012

The projects mentioned in this article have been awarded through the NEH Division of Preservation and Access's Humanities Collections and Reference Resources grant program: PW-50310-09 and PW-50778-11.