Is Valentine’s Day just a business opportunity for greeting card companies, as is often complained?  The February 14 holiday has roots in the ancient Roman fertility celebration of Lupercalia and the early Christian feast day of St. Valentine, but its American revival did center almost wholly on selling cards.  While Valentine’s Day had been a popular folk celebration in Britain for many years, the holiday didn’t really catch on in the United States until the 1840s.  That was when enterprising businesses saw the opportunity to integrate romantic sentiments and material culture in the emerging consumer economy.[1]  Combining both the sentimentality and the rough humor of the age with new modes of mass production and sales, the holiday became a national craze.  You can learn more about the emergence of Valentine’s Day as a holiday and a business opportunity by reading historic newspapers available in Chronicling America. 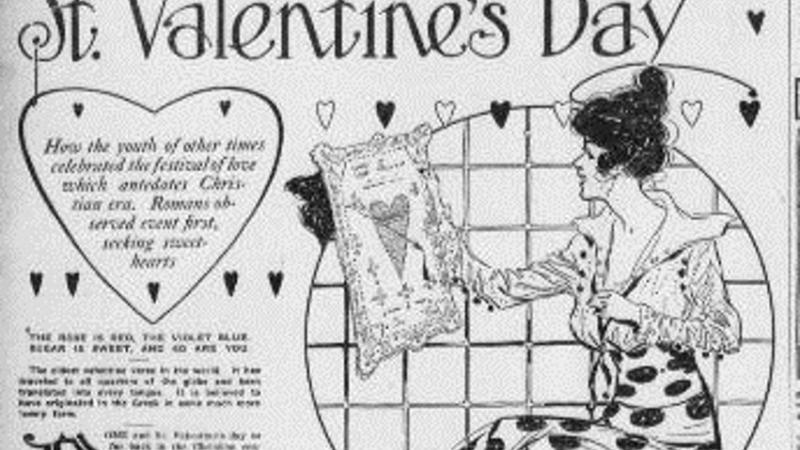 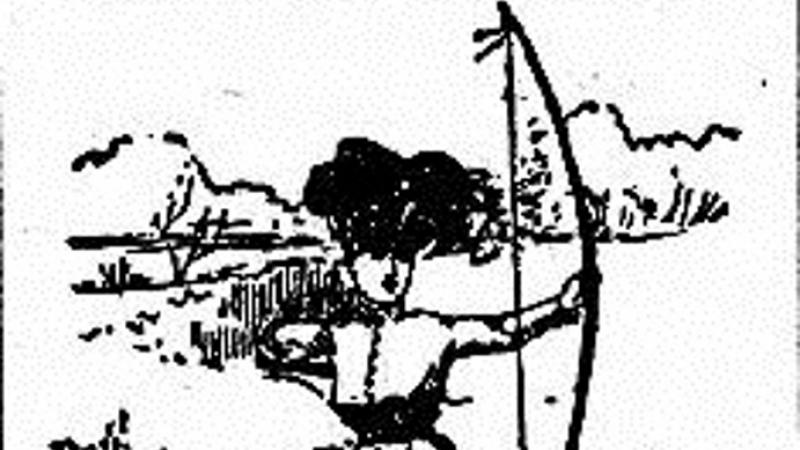 Chronicling America is a freely accessible Web site providing information about and access to historic United States newspapers published between 1836 and 1922.  To date, over 10 million pages are available on the site. Chronicling America is produced through the National Digital Newspaper Program, a partnership between the National Endowment for the Humanities, the Library of Congress, and state projects.  NEH awards enable states to select and digitize newspapers that represent their historical, cultural, and geographic diversity, and to contribute essays about each newspaper and its historical context.  The Library of Congress unifies all content provided by states and permanently maintains the digital information, and makes Chronicling America freely available on the internet.  Users may search the millions of digitized pages and consult a national newspaper directory to identify newspaper titles available in all formats.  This effort ensures that users will continue to have access to this historical record even as technology changes.

Before the 1840s, Americans looked—somewhat askance—at the Valentine’s Day custom of drawing lots for husbands and spouses, which originated in ancient celebrations and persisted in Britain.  A number of other British Valentine’s Day divination superstitions also titillated American audiences—the idea that young women went to the churchyard at midnight to see what their future husbands would look like, for example, or pinned bay leaves under their pillows and ate hardboiled eggs filled with salt so they would dream of their sweethearts.  Valentine’s Day only really caught on in the United States, however, in the mid-19th century, when an enterprising young woman from Worcester, Massachusetts, saw in valentines a unique business opportunity. 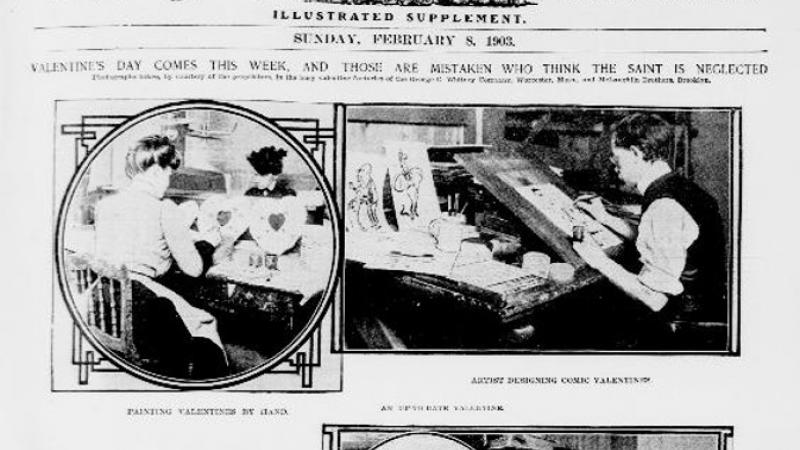 “Valentine’s Day Comes This Week, and Those are Mistaken Who Think the Saint is Neglected.” New-York Tribune. (New York, New York) February 8, 1903. 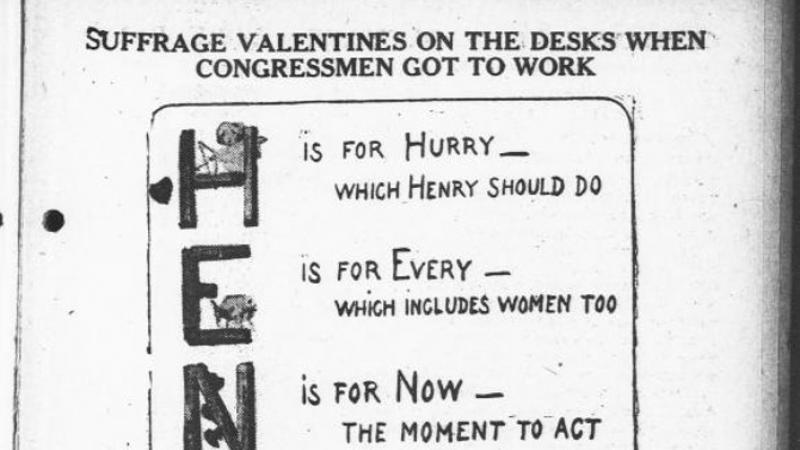 “Suffrage Valentines on the Desks When Congressmen Got to Work.” The Day Book. (Chicago, Illinois) February 14, 1916.

It was Esther Howland (1828-1904), a graduate of Mount Holyoke College, who created the American Valentine in 1849.  Howland was inspired by an English valentine she had received, bordered with lace and flowers with a tiny note pocket in front.  Howland’s father was a stationer who planned to import valentines from England. But without telling him Esther decided to design her own valentines from lace paper, colored paper, and paper flowers.  After Esther’s brother, a traveling salesman for the family business, returned with $5,000 in orders (much more than the $100 her father had anticipated), the Howlands knew they had a winning concept and started their own valentine factory.  Within a few years Howlands were selling goods worth $100,000, and Esther eventually made her fortune with these sentimental notes.  By capitalizing on the public’s sentimentality, Esther Howland became extremely successful in business—quite a feat in what was essentially a man’s game at the time.

Valentines expanded to other locations and soon became a big business. Newspapers were a critical means for shops to advertise their sale.  The valentine phenomenon spread west, with a store in Astoria, Oregon, in 1884 boasting the largest and finest stock “received DIRECT from the EAST” in the Daily Morning Astorian.  Valentines also took on local inflections, as evident in a 1884 ad in the Daily Evening Bulletin of Maysville, Kentucky, featuring “Dude” Valentines, and a 1906 do-it-yourself valentine advertised in Washington, D.C.’s Evening Star.  Printing shops published “valentine writers,” containing serious or comical verses for valentine writers to copy, modeled on earlier 18th-century versions of the books such as “The Young Men’s Valentine Writer.”  A dozen businesses, advertised in the Richmond (Virginia) Times Dispatch in 1912 offering cash prizes for valentine verses.  Entrepreneurs soon saw other merchandising opportunities, as reflected in a 1918 ad in Columbia’s Evening Missourian encouraging readers to “Say it with Flowers on Valentine’s Day.” 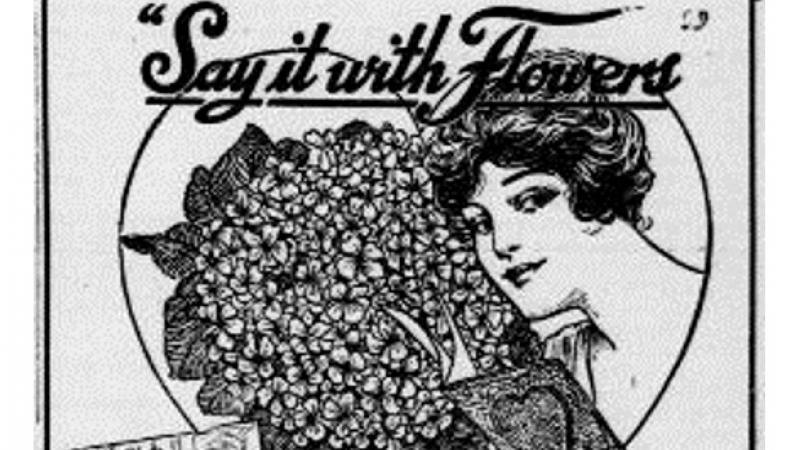 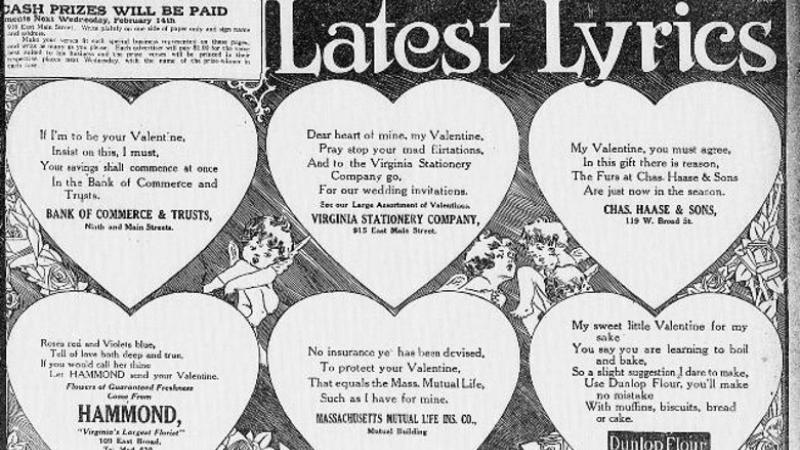 Along with valentines of the sentimental variety, the American public embraced comic valentines.  Many of them rather mean-spirited, comic valentines fit within the style of humor prevalent in the United States at the time, which often poked fun at others’ misfortune.[2]  The Crystal Palace in Astoria, Oregon, for example, boasted “Comic, Long Jokers, Fault Finders, Hit ‘Em Hards, Trade Comics, Sharp Darts,” as well as the more love-oriented “New Lace Valentines, Gems of Love, New Sachet, Love’s Arrows, Cupids Darts, Satin Novelty” valentines.  In 1900, for example, the Temple of Economy in Marshalltown, Iowa, promoted a wide variety of valentines: “Some for those you love.  Some for those you don’t love so well,” and advised customers to “Hit ‘em hard!  Hit ‘em easy!  Make ‘em laugh!  Make ‘em crazy."

Others saw the Valentine’s Day as a political opportunity, such as the creators of this 1916 Suffrage Valentine, published in Chicago’s Day Book and sent to congressmen in support of the Susan B. Anthony Amendment which would eventually enshrine women’s voting rights in the Constitution.  According to the Washington, D.C. Evening Star, public interest in the holiday led to a deluge of valentines sent to the White House in the same year.  Others viewed Valentine’s Day with a wry eye, like Clarksburg’s  West Virginia Daily Telegram’s  which in 1914 reported on “modern, up-to-date” valentines for “divorcees, grass widows, blasé youths, suffragettes, eugenic fanatics,” which stated that “national issues, combined with issues concerning the heart, are the thing this year.” 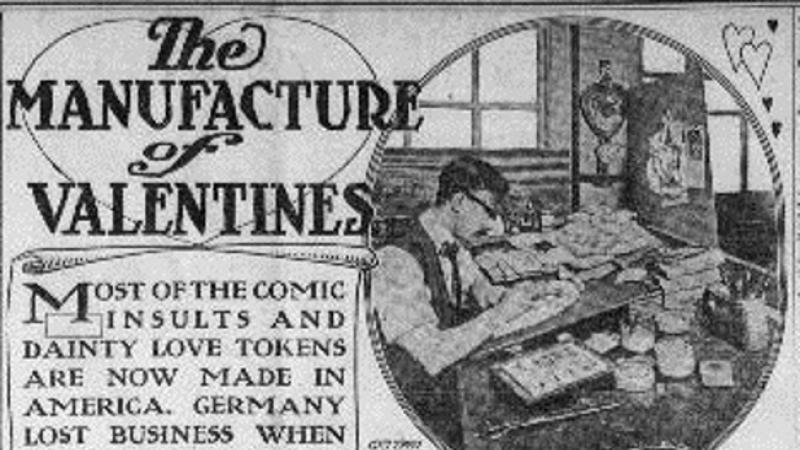 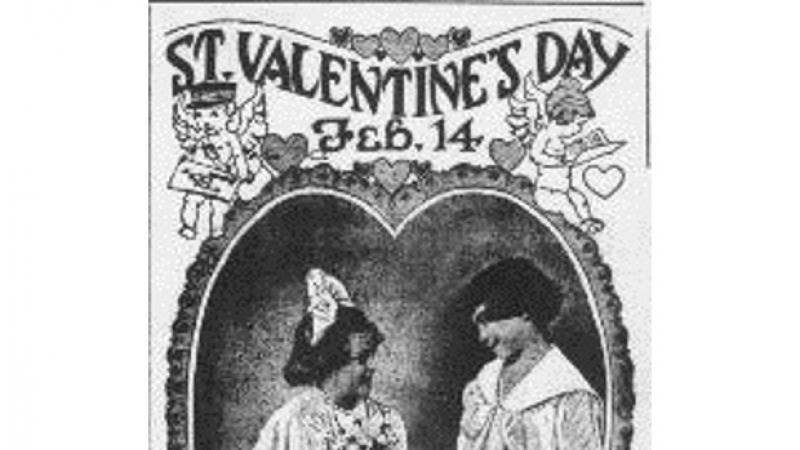 From London to Germany to America, With Love

This 1903 photograph spread in the New-York Tribune depicts the process of designing, writing, painting, and assembling valentines at that time.  Eventually, postcards, many of them originating in Germany, supplanted most of the lace and flower affairs.  When war cut off trade with Germany, however, the production of valentine cards once again shifted to the United States; as a 1916 Kansas City Sun article announced, “Most of the comic insults and dainty love tokens are now made in America.”  While the tradition of Valentine’s Day goes back hundreds of years, it was the merchandising element of the holiday that dominated in 19th- and 20th-century America.  The formats and location of their production may have changed, but valentines are here to stay.  You can find more articles and advertisements related to this holiday by searching Chronicling America for “Valentine’s Day,” “valentines,” or “Esther Howland.”  Happy Valentine’s Day!