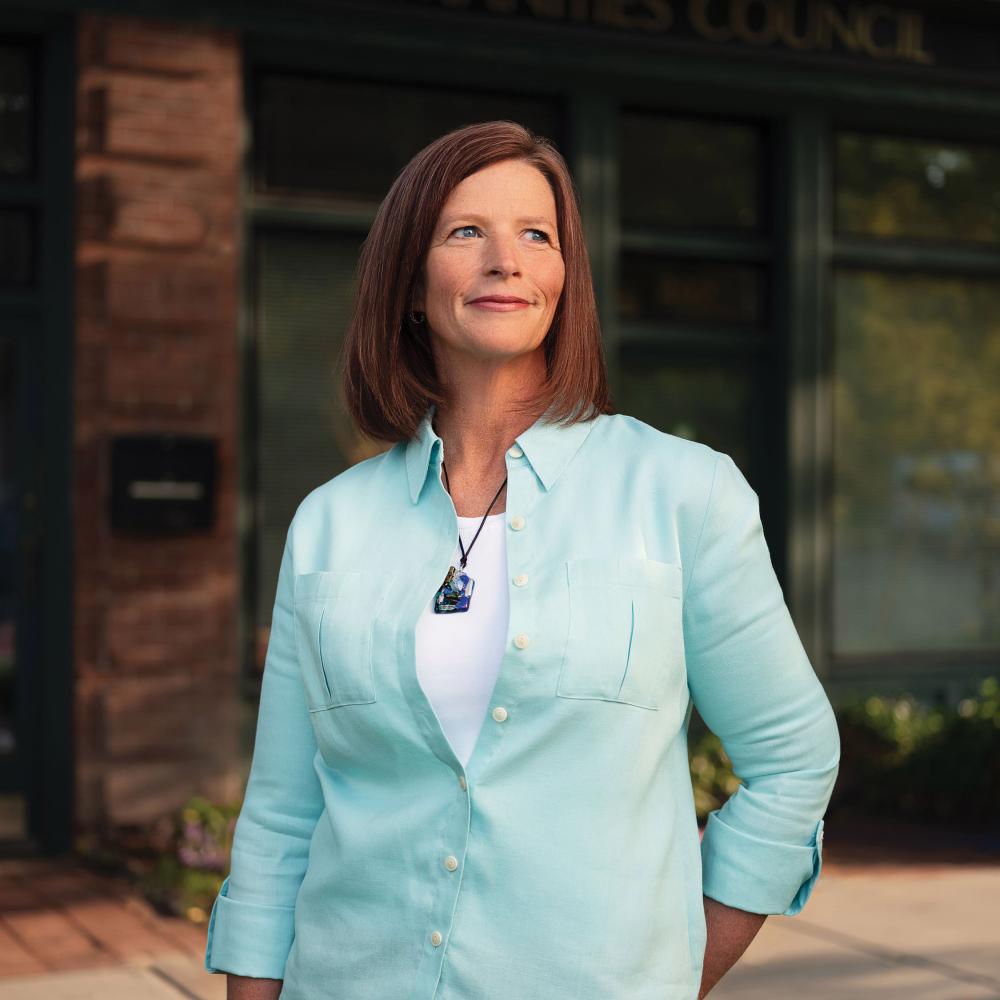 —Photograph by Story by Light Photography

Jodi Graham watched as a man rose to his feet in the center of the theater.

This was several years ago in the tiny central Utah community of Gunnison, just after a Utah Humanities screening of a segment of Ken Burns and Lynn Novick’s The War.

Professor Matthew Basso of the University of Utah was leading the council’s discussion after the film, and, as always in Community Conversations, Graham was energized by not quite knowing what might happen next.

The documentary released memories of the man’s own military experiences, locked away for more than 50 years. For the first time, he recounted war story after war story to his community and family members.

“His wife said he had never spoken about the war in their entire married life,” Graham recalls. “The documentary connected his family to him, connected his history to his family, and also to the people who were there. For his grandchildren to be there, to experience just a little piece of what their grandfather experienced, and then for him to talk about it—it’s something I will never forget.”

The details Graham recounts underscore her leadership vision at the council she took over in 2018, after years of program management. Ask Graham about Utah Humanities, and you’ll hear about building bridges through collaborations. Elevating and amplifying the work of its partners is key to Utah Humanities’s mission, as the council aims to make connections across racial, demographic, and geographic divides.

Among the flagship programs Graham is proud of nurturing are the Clemente Course in the Humanities at two Salt Lake City high schools, as well as a nationally lauded college-level humanities course, Venture, recently based at Cedar City’s Southern Utah University; and Think Water Utah, a statewide collaborative initiative with exhibits, discussions, art projects, and podcasts, particularly timely during a regional drought.

“Jodi’s secret sauce is she really gets collaboration in an authentic and important way,” says Crystal Young-Otterstrom, executive director of the Utah Cultural Alliance, a statewide advocacy association, where Graham recently served a six-year board term. “Jodi always shares. And always brings more to the table.”

Later this year, Graham and Jennifer Ortiz, the director of the Utah Division of State History, will receive national recognition for StEPs-UT (Standards and Excellence Program for History Organizations), for their work creating a two-year professional development program for small museums and history organizations. “The last year and a half has been a real struggle for all of the organizations we serve across the state, and her humor has been able to lighten moods,” Ortiz says. “And it’s been needed.”

Graham can also look with pride upon the Utah Humanities Book Festival. This year’s 24th annual event continued with ambitious virtual programming, as did last year’s festival, when the slate of readings attracted attendees from Mexico, Australia, and Argentina. “The pandemic turned it into an international event, which is cool,” Graham says.

“Jodi is a wonderful colleague in that she is supportive and encouraging, while also being direct and speaking her truth,” says frequent collaborator Victoria Panella Bourns, division director of Utah Arts & Museums. “She is just so marvelously authentic all the time,” says Laurel Cannon Alder, the grants manager for Arts & Museums programs, who has traveled throughout the state with Graham.

Adds Jean Cheney, a former Utah Humanities colleague: “Jodi has a way of voicing her own view of things, but in the most careful and respectful way, so that she is always listened to. There’s nothing elitist about Jodi Graham at all, even though she has very high standards.”

Graham began work at Utah Humanities in 1996 as an administrative assistant, shortly after receiving her musical theater degree from Ogden’s Weber State University. She was hired by the council’s first full-time executive director, Delmont R. Oswald, and was further mentored by his successor, Cynthia Buckingham. “I feel like I was trained by the best in a lot of ways,” Graham says. “Delmont was gregarious and a respected scholar. Cynthia was calm, gracious, and a gifted administrator.”

After eight years out of state, she and her family moved back to Utah in 2012. Graham returned to Utah Humanities, where she worked as assistant director and oversaw community conversations and grant programs.

Through the years, across a variety of positions, Graham has continued to innovate, all the while leading and listening to community conversations across racial, political, and demographic lines. Her philosophy can be simplified to this: “The humanities bring people together,” she says, “and I really want everyone to be a part of it.”

What’s your favorite place to take Utah visitors? Wayne County. The red rock of Capitol Reef National Park will take your breath away.
What musical theater character explains your love for the genre? Mrs. Lovett from the Stephen Sondheim musical Sweeney Todd: The Demon Barber of Fleet Street. She’s layered and complex, seemingly a bit daffy and kind-hearted to those she loves while holding dark secrets.
Name three books that reveal something that most people don’t understand about Utah. This Is the Plate: Utah Food Traditions, a look at Utah’s food folklore that goes beyond green Jello; Great & Peculiar Beauty: A Utah Reader; and (the digital) Utah@125.

Ellen Fagg Weist, a veteran journalist, is the public information officer for the Utah Department of Cultural & Community Engagement. In partnership with Utah Humanities, she recently edited Utah@125.

This article is available for unedited republication, free of charge, using the following credit: “Originally published as “Utah's Jodi Graham” in the Fall 2021 issue of Humanities magazine, a publication of the National Endowment for the Humanities.” Please notify us at publications@neh.gov if you are republishing it or have any questions.