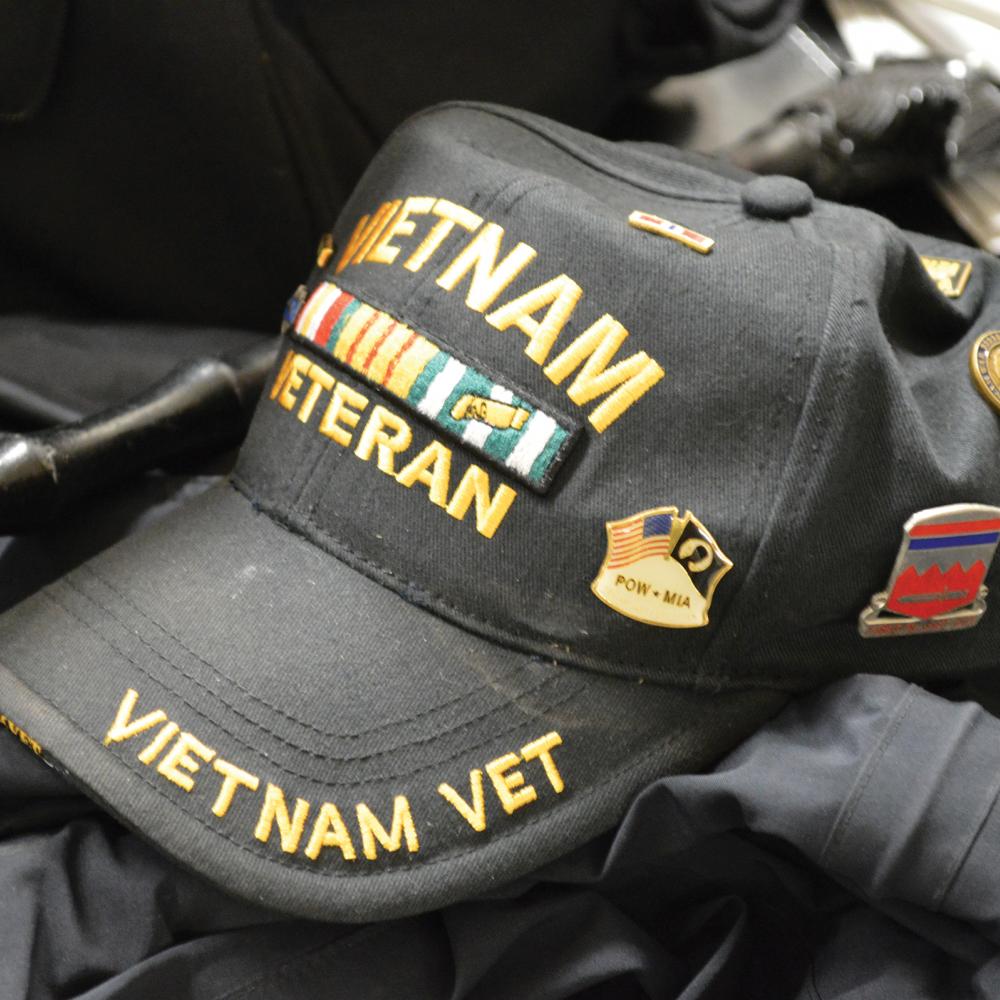 “I never knew how to handle Vietnam,” says Jennifer Davidson, who teaches U.S. and world history at Southern High School in Harwood, Maryland. The daughter and granddaughter of men who served in the Vietnam era—her father in the Navy and her grandfather in the Army—was struck that she never heard veterans telling stories about the Vietnam War.

“My grandfather was a veteran of Korea and Vietnam, and he didn’t talk about it,” Davidson says. When he died in 2015, she decided the stories of that era were not going to be lost.

Last fall and this spring, 105 of Davidson’s students interviewed 29 Vietnam vets as part of an oral history project supported by the Maryland Humanities Council (MHC). It is part of Standing Together, an NEH initiative to help Americans understand the experiences of American soldiers.

University of Maryland, Baltimore County, oral historian Barry A. Lanman taught the students how to interview, research, and document the veterans’ stories. Bruce Kissal, a professional videographer and a Southern High School parent, worked with the students, and Bill Buestring from Maryland Public Television talked to a class about editing.

William Mayhew, who served in the 82nd Airborne Division, participated because “I was hoping the need to really learn history would click with them. History is not a boring subject. It has relevance.”

Just agreeing to do the interview with the students, however, brought flashbacks that sent Mayhew back to counseling. In the transcript of his interview, the students recorded that fighting the Viet Cong in the south was particularly scary. The North Vietnamese fought conventionally, and “if they overran your position, they would actually bury your dead,” Mayhew told them. But the Viet Cong in the south practiced guerrilla warfare, and they wouldn’t attack unless they had you “completely outnumbered.”

Other veterans remembered leeches, the oppressive heat and humidity, the monsoons, triple canopy jungles, being attacked in the dark, the sergeant who taught survival, Agent Orange exposure, the beauty of the landscape, the friends who didn’t make it home.

“We never spoke about the war,” says Gene Feher, a veteran who retired to Easton, Maryland. Having served “was a black mark.”

Feher had been drafted in 1968. When he left Oakland, California, for Vietnam, he recalled that it was 2 or 3 in the morning, and “suddenly the outside doors of this gym room opened and all of these fellow GIs came in, but you could tell they were wearing worn jungle fatigues . . . they walked by us, and it struck me as odd that, the 100 or 200 guys that walked by, not one of them looked up at us.” It wasn’t until he came home that Feher understood why. “You don’t want to look at somebody that might not ever come home.”

The students asked him, “Can you describe everything that you were feeling on your way home?” “Blind euphoria,” Feher replied. “I think the best thing was when we finally got on that airplane that everyone referred to as the ‘freedom bird.’ The flight home to what we referred to as ‘the World.’”

Alyssa Turley, the interviewer in the three-member team that took Feher’s oral history, said that “the treatment of soldiers upon their return home was something that came as a shock to me.”

When he re-entered civilian life, Feher told the students he interviewed for jobs in New York City, and he’d get the inevitable question about the two-year gap in work experience. “I said, ‘I was in the military.’ ‘Where were you?’ ‘Vietnam.’ And pretty much the interview was over. They wouldn’t hire you. They would not hire a Vietnam vet.”

Lanham says Davidson “did a great job teaching them about empathy—about listening, even if they don’t agree. The kids understood the topics could be intense.”

Was anything off limits? Turley says when Feher chose not to answer a question, she “felt I had no right to push deep.” For his part, Feher felt “they didn’t need to hear certain things.”

Davidson says, “I think the veterans found it easier to talk to a generation not affected by the negativity around the Vietnam War.”

Copies of the footage from the interviews conducted at Southern High School will be sent to the Maryland State Archives in Annapolis and to the Maryland Museum of Military History in Baltimore. For Armed Forces Day on May 21, the students will share their projects with veterans, parents, and the public at Southern High School, and a video by Maryland Public Television, featuring Southern High students, will be part of an education packet coming out this summer. Students from around the state, including Davidson’s, have been invited to show their work at LZ Maryland, MPT’s event to honor Vietnam vets at the state fairgrounds in Timonium this June.