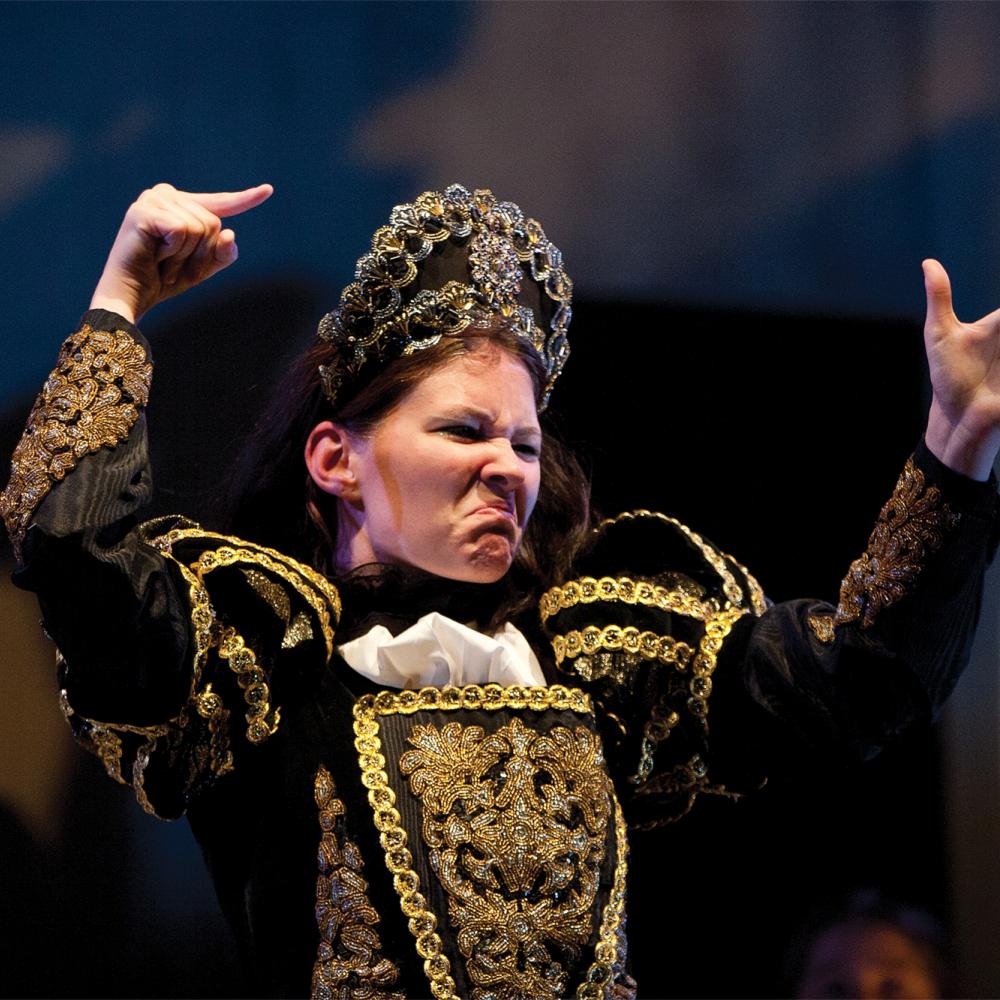 Sandra Mae Frank signs “murder” as the player queen in Hamlet, directed by Ethan Sinnott at Gallaudet University in 2012.

Two videos from Shakespeare’s Hamlet appear on screen. First, a black-and-white television performance from the 1960s shows Claudius as he laments his guilt. Second, a recent staging shows Hamlet’s encounter with his father’s ghost. They use two very different translations of Shakespeare into American Sign Language (ASL).

In the first, a famous Deaf actor named Howard Palmer is dressed in period costume and expresses in his hands and body a translation that closely follows Shakespeare’s original text: “heart with strings of steel, / Be soft as sinews of the new-born babe.” It is not an exact translation—ASL has its own grammar rules. So the ASL actor signs, “My heart hard,” for example, because there is no verb “to be” in ASL. How, then, does an ASL actor perform the famous “To be, or not to be” speech? There are many possible ways, says Jill Bradbury, who is chair of performing arts at the National Technical Institute for the Deaf at the Rochester Institute of Technology. One is to sign the word “live,” then use a body shift to show contrast, and sign the word “die,” followed by the sign for “Which?”

In the second video, a 2012 production of Hamlet at Gallaudet University, Hamlet’s father’s ghost appears as a video projection, with only his signing hands clearly visible. The original text reads,

Now, Hamlet, hear.
‘Tis given out that, sleeping in my orchard,
A serpent stung me. So the whole ear of Denmark
Is by a forged process of my death
Rankly abus’d. But know, thou noble youth,
The serpent that did sting thy father’s life
Now wears his crown.

But, here, the translators do not try to match Shakespeare’s words. Instead, they tell the same story in just a few hand symbols that succinctly describe the event of the king’s poisoning and usurpation.

Both performances are in ASL, both are of Shakespeare, but they are drastically different in their approaches. Bradbury spoke about the ways Shakespeare is translated into ASL in a webinar this past spring for the University of Georgia.

With a grant from Georgia Humanities, English professor Sujata Iyengar brought Bradbury to the university in this virtual lecture. It fit well with Iyengar’s own areas of interest. “I study adaptations, appropriations, and performances of Shakespeare in their historical, social, and artistic contexts—from many different times, places, and environments, including his own, of course,” she says.

In the webinar, Bradbury discusses the two videos. “One is a translation that mirrors the English text, following the themes, imagery, and development of ideas and sentences closely.” In contrast, the other takes “the source text as a starting point and focuses on the themes and concepts with less fidelity to the actual wording and sequence of Shakespeare’s lines.”

“The philosophy around how to translate Shakespeare into ASL has evolved over time,” says Bradbury. “It was not until William Stokoe’s linguistic research in the ’60s that people began to realize ASL was a true language rather than just a visual code for English.” Stokoe was a linguist and, from 1955 to 1971, an English professor at Gallaudet, where Bradbury taught for many years. Stokoe did extensive research on sign language and even named the language in his coauthored 1965 A Dictionary of American Sign Language on Linguistic Principles. As a result of Stokoe’s work, Bradbury explains, “Deaf people began to see the grammar, poetics, and literary techniques of ASL as being equal to the task of translating Shakespeare.”

Deaf performances of Shakespeare began in the nineteenth century. According to Bradbury, in 1865, Henry IV was performed at the Manchester Deaf Institution in England, and “in 1886, a popular British magazine noted a unique production of Shakespeare’s Hamlet mounted by the South London Deaf and Dumb Benefit Dramatic Club,” which was seen by an audience of six hundred. In the United States, Gallaudet University, then National Deaf-Mute College, produced what is known to be the first public performance of Shakespeare in ASL in 1884, offering a selection of scenes from Julius Caesar. “In the nineteenth century, Deaf theater at Gallaudet really took off,” says Bradbury. “And Shakespeare performances were an important part of that work.” ASL Shakespeare was central at colleges and universities and also in private theater groups, such as the National Theatre of the Deaf.

Performing in the 2014 production of the National Technical Institute for the Deaf’s The Taming of the Shrew are Joao Ciuba as Petruchio and Ashley Trujillo as the servant Ellie.

In her lecture, Bradbury lists additional resources, including the website for the ASL Shakespeare Project at Yale University, which explains that “every sign is made of four different components: hand configuration—how the hand is shaped, like b or 4, or other shapes; location—near the head, in front of the body or to the right or left; movement—how the sign moves, up or down, right or left, etc.; and orientation—which refers to which way the palm faces, up or down, or towards or away from the body.”

ASL signs that are similar in shape, location, movement, and orientation, produce a kind of visual rhyme, the ASL Shakespeare website explains: “‘Mother’ and ‘father’ have similar handshapes, orientation, and movement, so they have a good rhyme.” And meter can be established through repetition.

“The poetics of Shakespeare’s language is the central challenge for translators working in any language,” says Bradbury. “His language is rich in metaphors, allusions, puns, double entendres, homonyms, and other literary devices.” Bradbury explains that ASL has poetic features to suggest the artistry of Shakespeare’s language. In addition to rhyme and meter, there is also a form called classifiers that translators use. “A classifier is like a pronoun, verb, and adverb all packed in to one handshape,” explains Bradbury. “There are a limited number of classifiers, but they can be used to express unlimited types of action.”

Robert DeMayo, one of the translators with the ASL Shakespeare Project, offers an example. At the beginning of Twelfth Night, “Orsino has a speech where he talks about music, love, ocean, food etc. It’s more of a musical passage with soundwaves of music. But, for the Deaf, how do you do that?” he asks. “We had to come up with handshapes, movements, motion that had the same rhythm with the hands, not with music or sound—we disregarded that. Using the same handshape or similar movements or classifiers—we needed a way to make Shakespeare’s signs as beautiful as his music.”

Bradbury stresses that a hearing audience of ASL theater should “let go of the idea that you are going to see a word-for-word equivalent of Shakespeare’s play. Focus on what Deaf performers bring to his language—a physical expressiveness that lets you experience a different element of his dramatic artistry.”

This article is available for unedited republication, free of charge, using the following credit: “Originally published as “Shakespeare in Sign” in the Summer 2021 issue of Humanities magazine, a publication of the National Endowment for the Humanities.” Please notify us at @email if you are republishing it or have any questions. 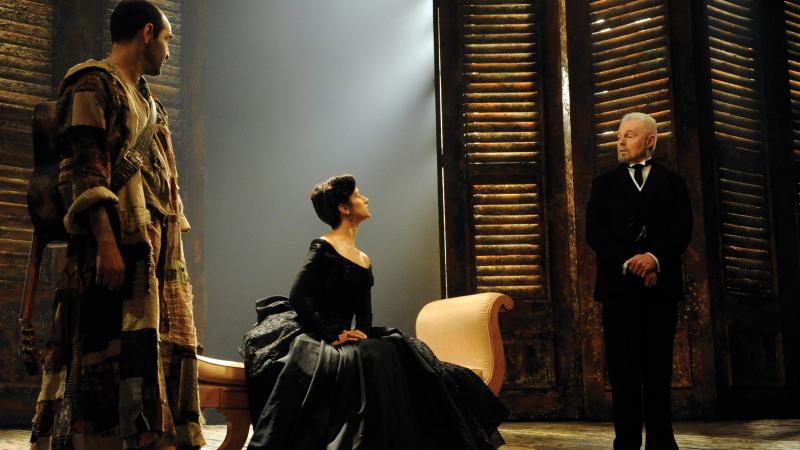 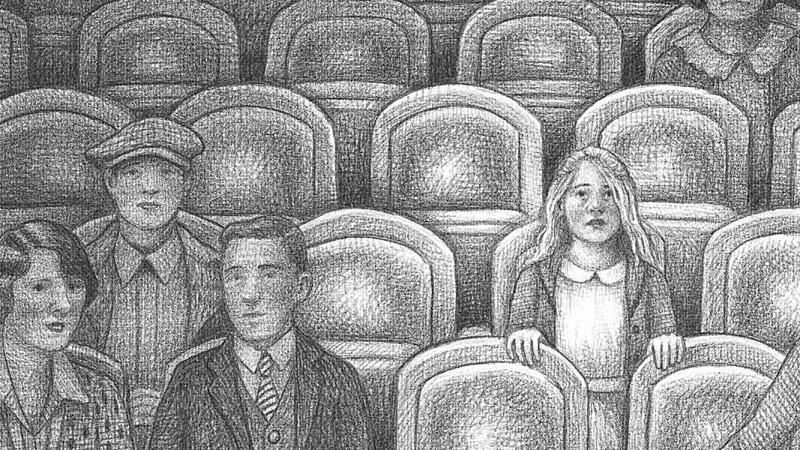